Meet Kepler-186f: First exoplanet found to be 'almost like Earth'

Scientists have found an Earth-sized world they've named Kepler-186f orbiting in a life-friendly zone around a distant star called Kepler-186. 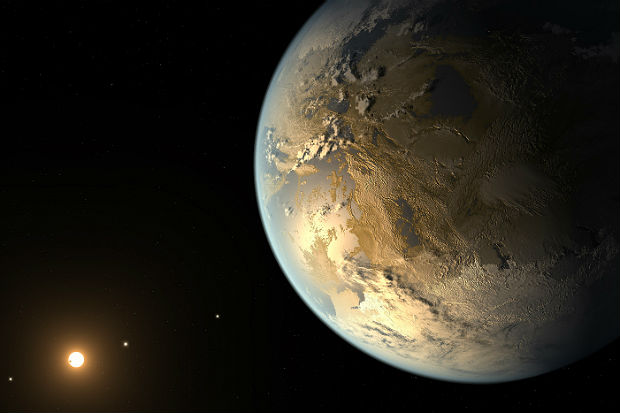 A NASA artist’s impression of Kepler-186f, the first validated Earth-size planet to orbit a distant star in the ‘habitable zone’, referring to a range of distance from a star where liquid water might pool on the planet's surface. – Reuters

The discovery, announced on Thursday, is the closest scientists have come so far to finding a true Earth twin. The star is located about 500 light years away in the constellation Cygnus, is smaller and redder than the sun.

The star’s outermost planet, designated Kepler-186f, receives about one-third the radiation from its parent star as Earth gets from the sun, meaning that high noon on this world would be roughly akin to Earth an hour before sunset, said astronomer Thomas Barclay, with NASA’s Ames Research Centre in Moffett Field, California. 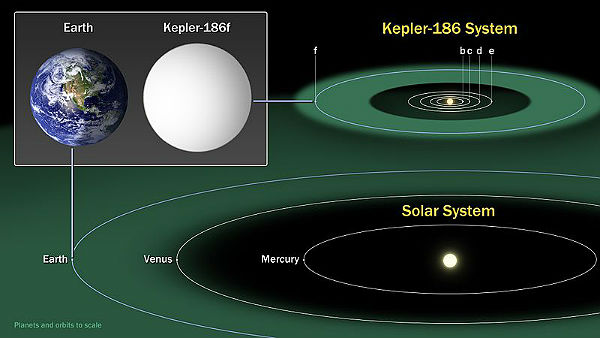 Same same but different: NASA's comparison of Earth and Kepler-186f in terms of size and positions from their respective stars.

The planet is the right distance from its host star for water – if any exists – to be liquid on the surface, a condition that scientists suspect is necessary for life.

“This planet is an Earth cousin, not an Earth twin,” said Barclay, who is among a team of scientists reporting on the discovery in the journal Science this week.

NASA launched its Kepler space telescope in 2009 to search about 150,000 target stars for signs of any planets passing by, or transiting, relative to the telescope’s point of view. Kepler was sidelined by a positioning system failure last year.

Analysis of archived Kepler data continues. From Kepler’s observational perch, a planet about the size and location of Earth orbiting a sun-like star would blot out only about 80 to 100 photons out of every million as it transits.

The pattern is repeated every 365 days and at least three transits would be needed to rule out other possibilities, so the search takes time.

“It’s very challenging to find Earth analogs,” Barclay said. “Most candidates don’t pan out, but things change as we get more measurements.”

Scientists don’t know anything about the atmosphere of Kepler-186f, but it will be a target for future telescopes that can scan for tell-tale chemicals that may be linked to life.

“This planet is in the habitable zone, but that’s doesn’t mean it is habitable,” Barclay said.

So far, scientists have found nearly 1,800 planets beyond the solar system.

“The past year has seen a lot of progress in the search for Earth-like planets. Kepler-168f is significant because it is the first exoplanet that is the same temperature and is (almost) the same size as Earth,” astronomer David Charbonneau, with the Harvard-Smithsonian Centre for Astrophysics, wrote in an email.

“For me the impact is to prove that yes, such planets really do exist,” Charbonneau said. “Now we can point to a star and say, “There lies an Earth-like planet.’” – Reuters