Life without a leg

Prosthetic limbs give amputees a new lease of life.

MOST people are puzzled when S. Velupelay, 54, tells them he has two right feet. Until he shows them his two right prosthetic legs.

Velupelay was diagnosed with diabetes at the age of 33, and gradually lost both legs to the disease. His right leg was amputated in December 2006, and his left leg in January 2012.

He was fitted with his first prosthetic leg in 2007, eight months after his amputation. The artificial limb was sponsored by Rotary Club of Subang.

But after some time, he developed sores on his stump. He sought help from the Welfare Department and in May 2008, he was fitted with a second right prosthetic leg (which cost RM6,900 and a silicon stump sock which cost RM2,000) for free.

When his left leg was amputated, Velupelay could not afford to get a replacement limb. So he fitted the more comfortable prosthetic limb from the Welfare Department, on his left leg. He took out the spare artificial limb (from the Rotary Club) and fitted it onto his right leg. And in doing so, the former project manager ended up with two right prosthetic legs.

When Velupelay lost his legs and subsequently, his job, he was overwhelmed by despair, grief and a sense of hopelessness. Financial strain set in too, and all these took a tremendous toll on his marriage. His wife left him.

“When I lost my legs, I also lost my family,” said Velupelay, tears welling up in his eyes, as he recalled those tumultuous days.

But his strong will to live pulled him through. Today, Velupelay lives in a low-cost flat in Petaling Jaya, and does odd jobs to make ends meet.

He gets by with a disability allowance from the Welfare Department.

He has mended ties with his family, and they call and look him up every now and then.

“It took six months to a year for the stump to heal,” said Velupelay, who had both legs amputated below the knees.

He goes to the hospital for follow-up treatments for his diabetes.

“I’m grateful to have two faithful friends who help me get around and accompany me to the hospital for medical appointments.”

This year, Velupelay received good news that he would be getting two artificial limbs for free.

“The doctor warned me that using two right artificial legs would cause imbalance when I walk. I needed to be fitted with proper limbs,” said Velupelay, adding that his doctor connected him to Limbs for Life Prostheses Centre, a community service initiative by the Bandar Utama Buddhist Society.

Velupelay was in good spirits when he turned up at the centre in Petaling Jaya, and was interviewed by Star2 while waiting to have the measurements taken for his right artificial limb.

A day earlier, he had his left prosthetic leg made.

Diabetic Rosnah Abdullah, 58, of Pantai Dalam, Kuala Lumpur, could not work after losing a leg. 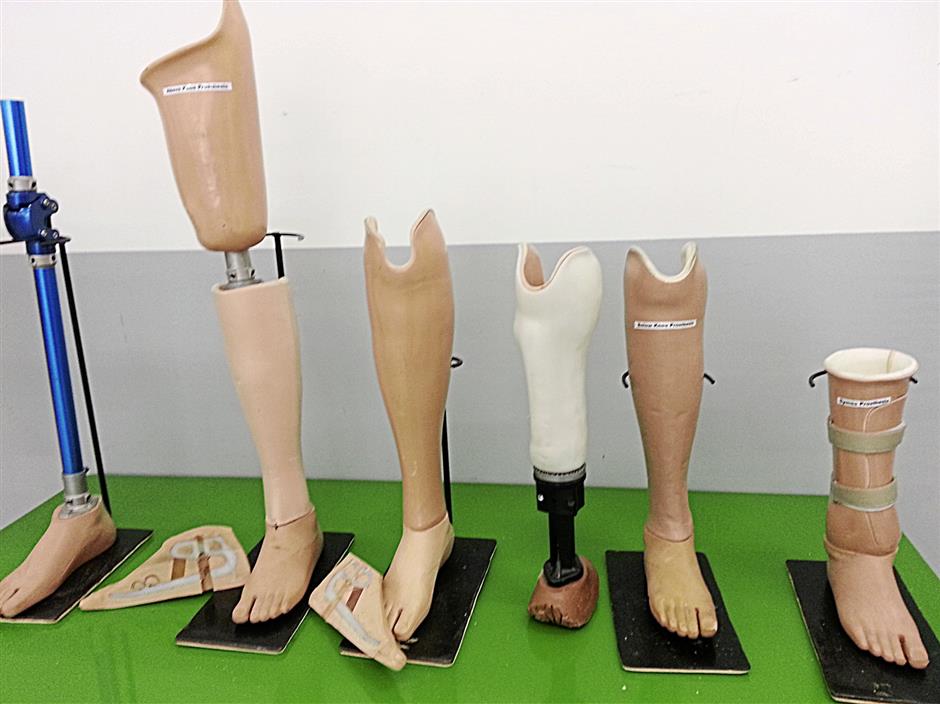 A range of artificial limbs which are available from Limbs for Life Prostheses Centre in Bandar Utama, Petaling Jaya.

She was diagnosed with diabetes five years ago, and had her right leg amputated above the knee, two years ago.

“I feel sad to lose a leg. It is difficult to move around on one leg,” said Rosnah, a former security guard.

The widow lives alone on the 13th floor of her 17-storey flat. Her three grown-up children, aged 27 to 37, have their own families. However, they check on her occasionally and accompany her for medical appointments.

Last November, Rosnah received a free prosthetic leg from Limbs for Life. She is still trying to learn how to use it.

“I’m not good at using the artificial leg. Sometimes it hurts, and sometimes it comes off when I’m walking. I have a walker to help me move around the flat,” she said.

Rosnah has only one meal a day, which she cooks herself.

“I’ve to watch what I eat because I’m also on insulin,” she said, adding that she gets RM80 a month in welfare aid, and free insulin supply.

Most of us look forward to New Year day with hope for a better tomorrow.

A port worker, Shafie was riding home after a late night shift when he met with an accident in the wee hours of Jan 1, 2012.

“After my leg was severed, all I felt was numbness. An hour later, I was sent to the hospital. At first, I was told that my severed leg could be re-attached but later, I learnt it could not be done,” he said. 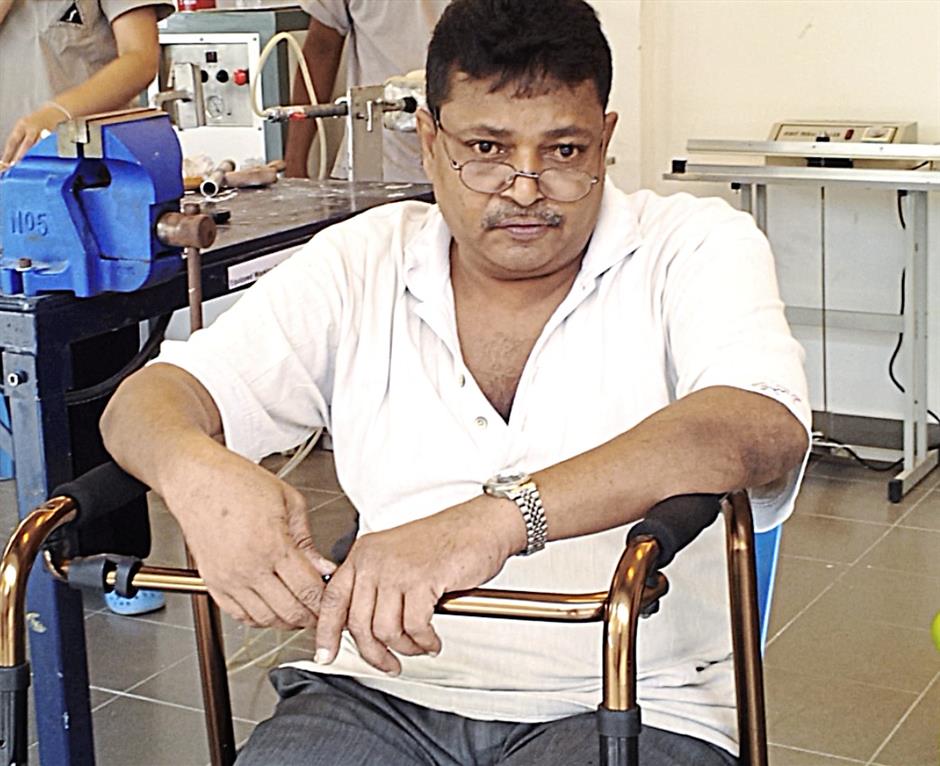 S. Velupelay was walking around with two artificial right legs until Limbs for Life
came along.

One-and-a-half years after the accident, he managed to get a sponsored prosthetic limb.

“However, after two months, I could not wear it because it was causing a lot of sores due to its ill-fitting socket,” he said.

The doctor who amputated his leg contacted him about a job opportunity.

Limbs for Life Prostheses Centre was looking to send a trainee to The Prostheses Foundation of HRH The Princess Mother (in Thailand) to learn how to make prosthetic limbs.

“It was great news to me as I had been unemployed for some time then,” said Shafie, who together with another amputee, went to Chiangmai for four months to learn how to make prosthetic limbs.

He almost gave up because the training was tough. However, he persisted while another trainee gave up mid-way out of frustration. “I had to move around on one good leg and a crutch,” said Shafie.

Two weeks before he finished training, the Thais had a surprise in store – they made an artificial leg for him. Shafie was over the moon. In no time he was walking around with his new leg.

Upon his return, he was hired as a technician at the Limbs for Life Prostheses Centre.

“I’m happy with my work, and proud that I’m making prosthetic limbs to help other amputees,” he said.

Shafie wears his artificial leg for six hours and removes it for an hour to rest.

“Do you know that an amputee uses double the energy a normal person takes to walk?” he pointed out. It was an eye-opener for me.

Like most amputees, Shafie was devastated to lose a limb. But he has since learnt to adopt a positive outlook and is very independent. After his father passed away in May last year, he helped to support the family as his two younger brothers are still in school.

“It seemed hard in the beginning but after a few days, I could adjust to riding a motorcycle with just one good leg,” he said.

“An amputee should never feel sidelined or defeated. What a normal person can do, we can do, too. In fact, an amputee must feel that he can do better!” said Shafie, who does not allow his disability to drag him down in life.