How some single parents are able to juggle work and family

Taking the plunge: Sheznie (here with her one-year-old daughter) is grateful that working from home has given her more time to spend with her children. Photo: CHAN TAK KONG/The Star

For single parents who have to earn an income and look after their children, working from home is the most viable option.

Quitting her corporate job soon after her divorce was literally a leap of faith for Sheznie Haroun Merican.

The former group marketing assistant general manager turned her kitchen into a bakery to earn an income and spend more time with her then 14-year-old daughter.

“After the divorce, I felt that I needed to make some changes in my life. My corporate career didn’t give me much time to bond with my daughter. She’d be sleeping by the time I got home. She was really close to her father so the divorce affected her deeply. I wanted to be there for her and starting my own baking business allowed me the flexibility to also become a full-time mum,” says Sheznie, 38.

Without the safety net of spousal and child support from her ex-husband, the pressure was on Sheznie to make things work.

“With a corporate job, you can look forward to the salary coming in at the end of the month. When you’re out on your own and working from home, there can be down times in the business where you’ll be struggling to make ends meet. Self-discipline is very important. There were days when I just wanted to sleep in and not do anything, so I had to keep motivating myself,” she says.

Lucky for Sheznie, she had support from her family and some savings to fall back on.

“Things weren’t easy in the beginning, but I fought through it. Believing that you can make it on your own helps,” she says.

It has been three years since Sheznie started her own business. Her start-up bakery has grown from strength to strength. At one point, she received an order for 6,000 cupcakes, which had to be delivered all over Malaysia.

“I was running deals on Groupon, Milk A Deal and a lot of other discount sites. Then, almost overnight everybody started ordering from me and I couldn’t keep up with the volume of orders. I worked around the clock for two weeks straight when I received that order for the 6,000 cupcakes. It was tiring, but very fulfilling.

“I was at home so I could see my daughter and talk to her. I even found the time to send her to school and pick her up. In that few years since I started working from home, I got to know my daughter much more,” says Sheznie, who has since remarried. Her second child, a daughter, turned one recently. It took Sumathi V. Palanisamy a while to find a job that would let her balance between earning a living and being there for her children. Photo: Art Chen/The Star

The baking business wasn’t something new to Sheznie. She was already selling her pies and cakes part-time, and business quickly picked up when she decided to go into it full time. Still, making it out on your own is never easy.

For some single parents, there is no choice but to opt for an arrangement that enables them to earn an income and still look after their children.

Homemaker Sumathi V. Palanisamy was thrust into such a situation when she lost her husband in a car accident, leaving her to provide for her two children.

“The first job I found was as a cashier at a mini market. We had just moved in with some relatives and I thought they would offer to watch my children while I worked. But sadly, they weren’t willing to commit to the responsibility and I had no choice but to eventually quit,” Sumathi, 47, recalls.

Sumathi pursued the idea of working from home but was well aware of her own limited work experience and skills.

Her situation changed for the better when she took up a two-day beadworking course, which enabled her to make and sell jewellery from home.

“I had no expectations when I joined the course. All I knew was that for the sake of my children, I had to give everything a go. I never thought that in just two days, I would manage to learn a new skill and make a living out of it.”

Sumathi now earns up to RM400 monthly from selling beaded necklaces, earrings and bracelets to her neighbours. To supplement the income, she also works as a part-time cleaner at an office, which earns her RM600 monthly. The job allows her to return home by 2pm, which is when her two sons, aged 10 and eight, return from school. 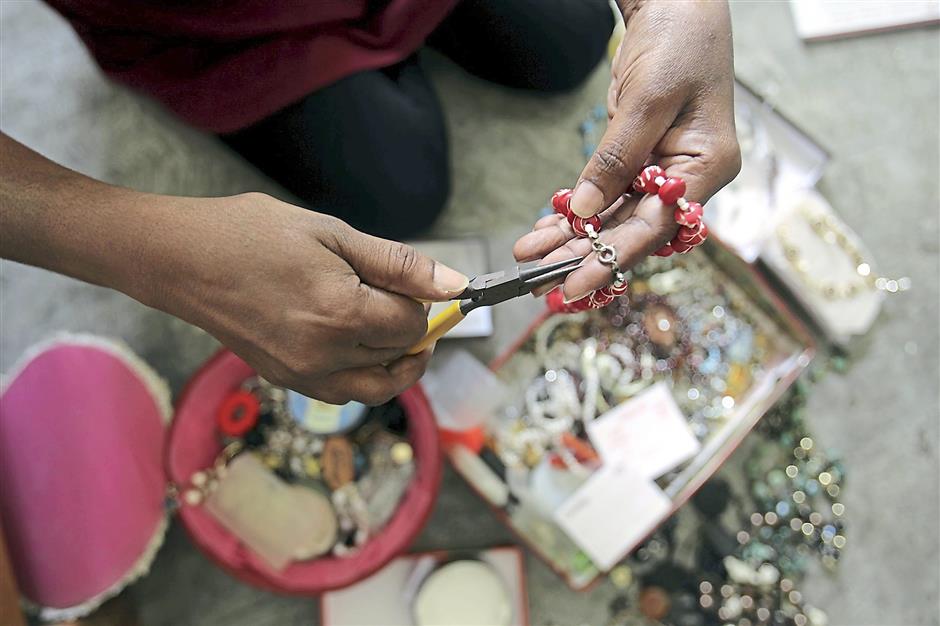 Sumathi’s situation changed for the better when she took up a beadworking course. Photos: Art Chen/The Star

“It’s been six years since my husband died. I’m really proud of how far we’ve come. When we first started out, we had nothing ... no beds, no furniture. My children had to sleep on clothes that I laid out on the floor. Food was bread dipped in water. Things are better now and we’re taking it one step at a time,” says Sumathi.

She adds that having a positive outlook in life can help the situation. Instead of resigning to her fate, Sumathi is constantly on the look out for new ways to earn more money. She recently joined a baking workshop in hopes of venturing into cake-baking in the future.

“There are always ups and downs. There are days where I’d let myself cry but I won’t do that for too long. I’d pick myself back up the next day and strive on. The children are my main motivation. I also hold on to the thought that anything is possible if you believe in yourself,” she says.

NEXT PAGE: Getting the support you need 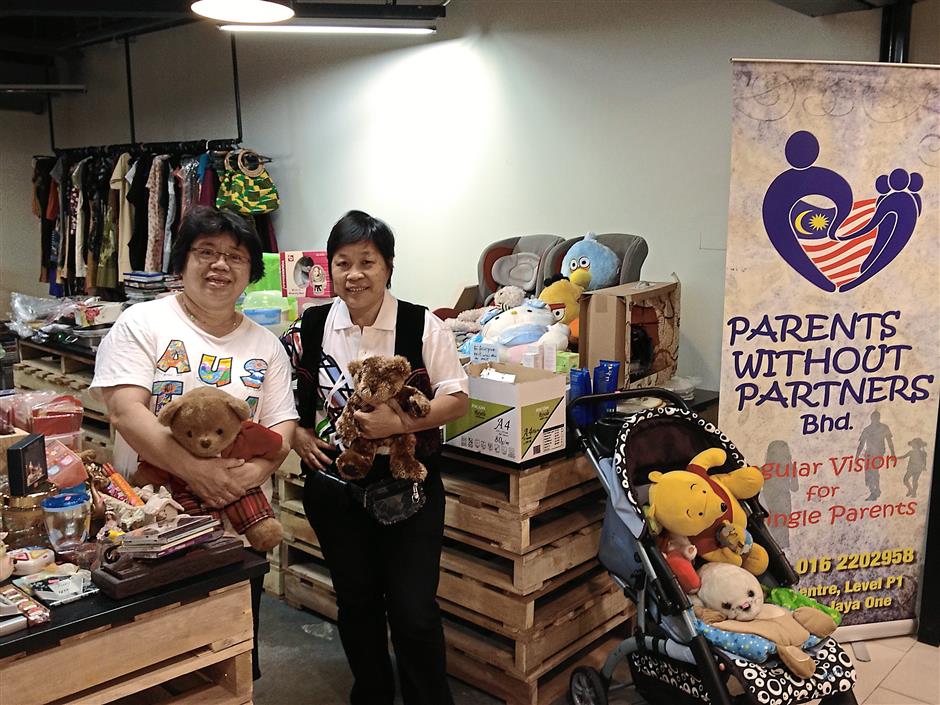 Getting support from other single parents and organisations

Founded in 2007, Parents Without Partners Malaysia currently supports 200 families – about 50 of whom are living in poverty – with a monthly food pack and cash. The organisation sustains its charitable activities through donations and revenue earned from their Jumble Station, a second-hand goods centre in Subang Jaya and at The School in Jaya One, Selangor.

Most of the furniture in Sumathi’s apartment now are from that organisation.

Parents Without Partners Malaysia co-founder Mary Anne Tan says there are several factors that one needs to consider before working from home.

“From finding a suitable job that would bring in a sustainable income to setting realistic goals, single parents need to be committed to the idea that they are in it for the long haul,” Tan says.

The former journalist says that the organisation used to run a social enterprise programme to support single parents who wanted to start their own subsidiary Jumble Stations. Those who were able to secure a suitable shoplot at their own apartment buildings were given three months of funding to pay for rental.

“Two single mothers took up the offer and we supplied them with second-hand goods from our main Jumble Stations. Business was good for the first two months, after which things died down because both women were not willing to commit to building the business long-term.”

Tan says the organisation’s main priority is to motivate single parents to empower themselves. 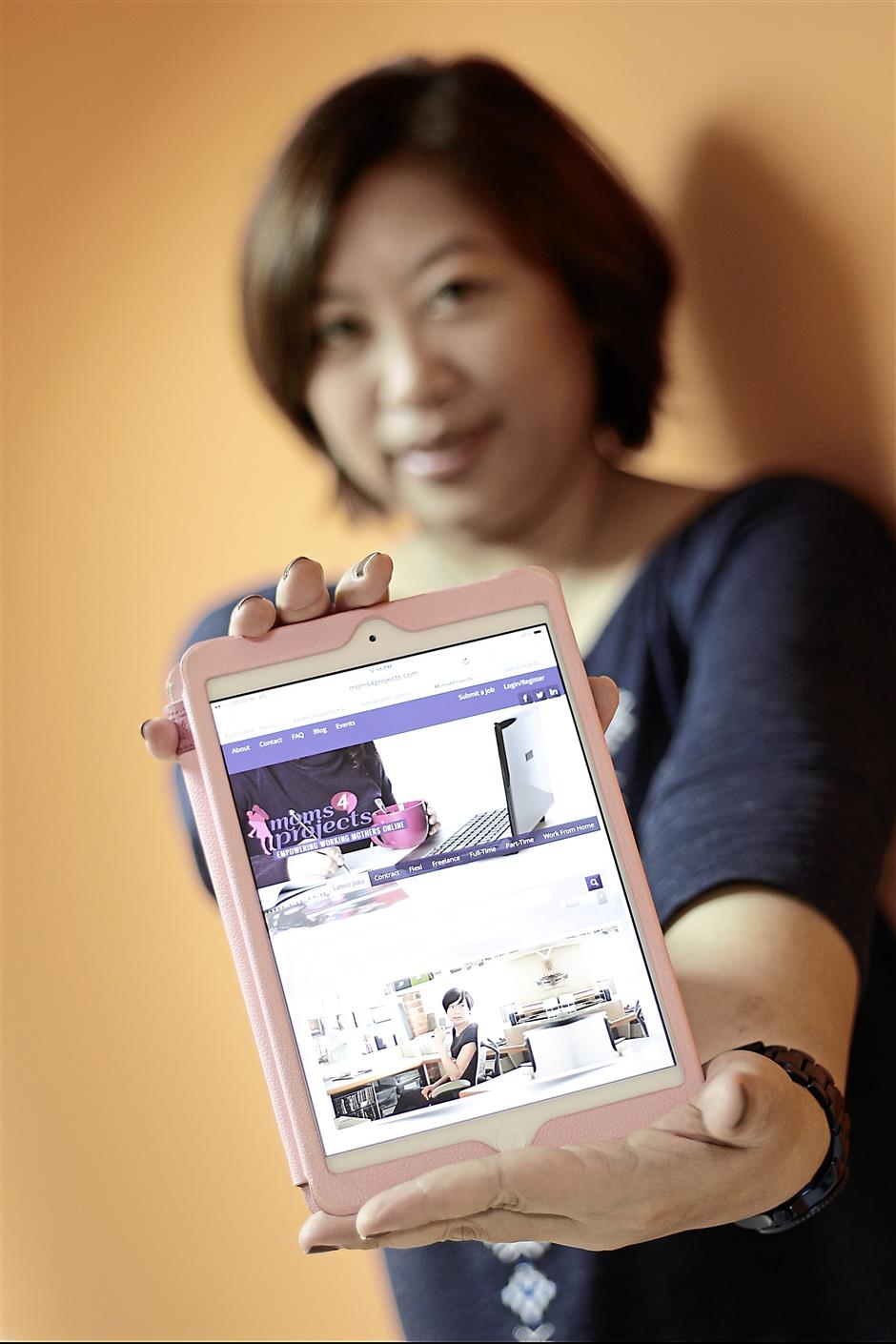 Angie Chin, founder of the newly-launched Moms4Projects, an online job matching service for mothers who want to work from home, foresees an influx of home-based jobs up for grabs.

“Many employers are looking at cutting costs and one of the ways is by hiring on project or part-time basis. This means instead of getting someone full-time to sit in the office, they will be moving towards hiring employees who can work from home to help save up on overhead bills,” she says.

Chin points out that single parents can take advantage of the various jobs listed on Moms4Projects, offered on a freelance to full-time or flexi-hour basis, to help them get started on identifying a suitable job from home.

“Home-based jobs require self-discipline and it may earn you a lot less as compared to a full-time job. But it’s all about give and take – being able to work from home can be more fulfilling and allow you more quality time with the children,” Chin says.

“Anyone can sign up, because the site is about giving people a chance to find themselves again, career-wise,” she says.

Tan acknowledges that those with younger children are often the hardest hit when there are changes in the family dynamics and the remaining parent has to become both the sole breadwinner and main childcare provider.

“Half of the single parents we have been helping do not have their family’s support so most have to raise their children single-handedly and that can come in the way of work. What we’ve discovered is that one single parent’s circumstances can differ greatly from another. And that it all boils down to the drive they have within themselves to make things work,” she says.

Tan hopes that the society will disband the stigma of helping single parents in need.

“Our role is to make them realise that they are not as helpless as they seem. There is a future ahead and they must remember to not let the negativity eat away at them and affect the little ones,” she says.