The science of compassion: When kids try to save the world

Valencia College Professor Debbie Hall shows the electronic portion of a ‘solar suitcase’ for an orphanage in Africa.

Fifth-graders build a portable solar energy generator meant for an orphanage in Africa.

Valencia College student Thomas Dillen held a solar panel as high as he could, trying to catch the waning sunlight.

Two dozen fourth- and fifth-grade students at Tildenville Elementary School clustered around him, hoping the panel would power the portable generators they’ve been building to send to an orphanage in Africa.

“Yay!” the students cheered when an LED light bulb attached to one of the generators lit up.

The students are working on a project that’s one part science, one part exercise in cooperation, a dash of cultural awareness – and a big dose of compassion and charity.

In a few months, they turned a box, some wires and a light socket into technology that will help poor children half a world away.

“I never knew that Uganda had no electricity,” said 11-year-old Darius Braunskill, part of the after-school group building the generators.

Valencia College professor Deb Hall, an electrical engineer, got the idea for the generators in 2009 at a renewable-energy workshop, where she met a couple who designed the “solar suitcases” and donated them to hospitals in developing countries.

Their company, We Care Solar, promotes safer delivery of babies in places where medical professionals have been operating by candlelight after dark. 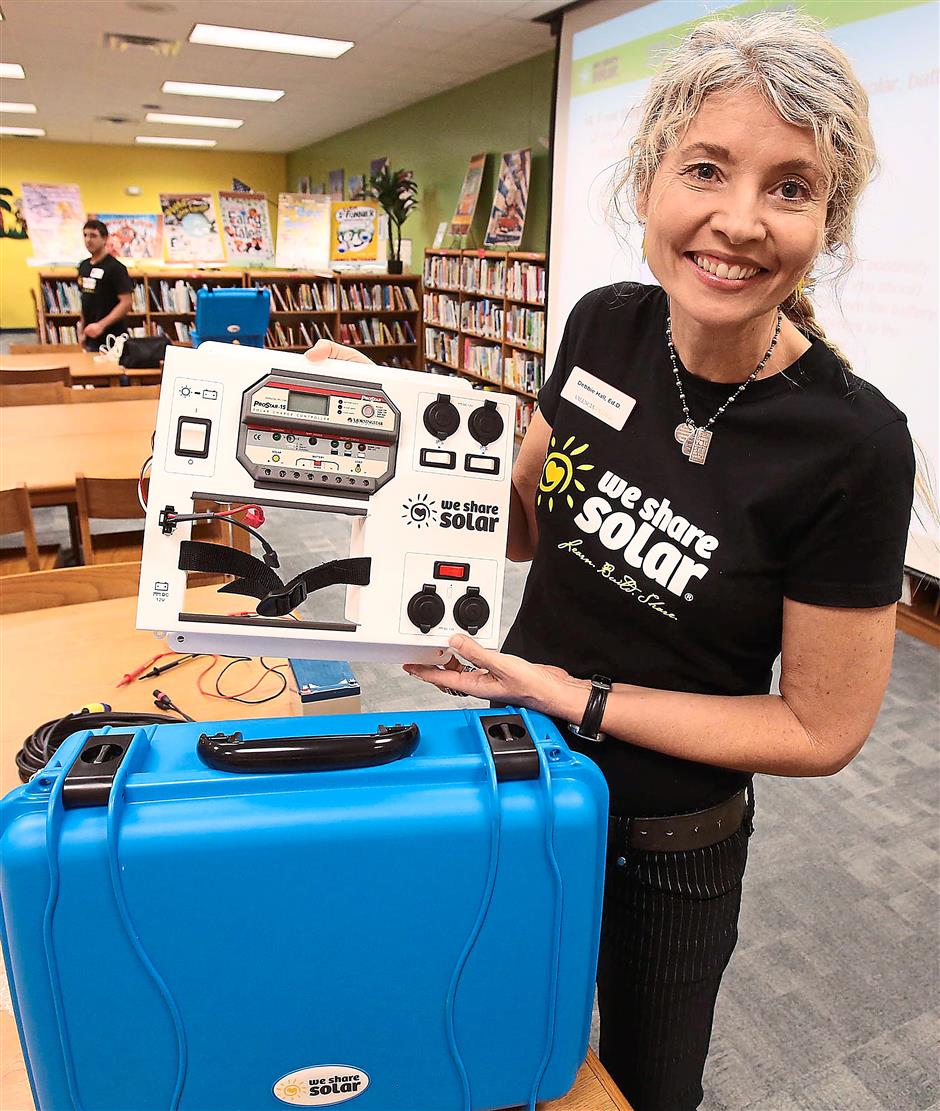 Valencia electrical engineering professor Deb Hall uses the project to combine hands-on education with a chance to improve the world.

Hall was intrigued by the chance to marry hands-on teaching with a project that could improve the world. “I just thought that was so powerful,” she said.

Hall obtained a US$5,000 (RM17,000) grant from the Valencia Foundation that paid for her students in Introduction to Alternative and Renewable Energy to build five generators, which were sent to Haiti, Costa Rica, Guatemala and Kenya. She kept one as a demonstrator.

About three years ago, Hall and a half-dozen of her students began visiting Tildenville Elementary to introduce science teacher Sharon Burnett’s fifth-graders to technology and engineering careers.

“These kids need to have their eyes opened to what might be available to them in the future,” Burnett said.

Hall brought along one of the solar suitcases, and Burnett thought they would be a good project for her after-school students.

We Care Solar agreed to let elementary-school students participate for the first time if the Valencia students supervised and the Berkeley, California-based We Care Solar inspected the suitcases before they were sent to Uganda. Power pack: Fifth grader Nemiah Wallace (left) tests the electronics of a ‘solar suitcase’. The solar suitcases, which use a solar panel to generate electricity, will be sent to orphanage schools in Uganda. — TNS photos

Burnett got a grant to build three of the suitcases, which now cost US$1,500 (RM5,100) apiece, and the project began in August.

The generators can be used to power headlamps, rechargeable batteries and a lamp, all of which will be provided in each suitcase.

On a recent Friday, the children divided into three groups in the library and worked under the supervision of the Valencia students while Hall gave instructions.

“Everybody gets a chance to tighten up the screws,” Hall said as the kids clustered around the generators.

“You don’t want to overtighten it,” Dillen, 44, cautioned.

The group, composed of students with a wide range of abilities and no particular interest in science, is learning not just about electricity and sustainable energy, but about the importance of working together, following directions, testing their work – and counting their blessings.

More than two-thirds of the children at the Winter Garden school are eligible for a free or reduced-price lunch, but they live in luxury compared with the Ugandan orphans.

Ariana Gonzalez, nine, said she felt sad when she learned about the limited resources at the orphanage school.

“In Uganda in some orphanages, they don’t have an light at all,” fourth-grader Ariana said.

“They have only one little candle, and it doesn’t light up the whole room.”

The class will get a chance to connect with the African children more personally, and practise their writing skills, when they compose letters to accompany the bright-blue, plastic suitcases.

“We’re glad to help them,” said Zuleany Alers, nine. “I hope they enjoy it.”

The Valencia students benefit, too. They get college credit for time they devote to the project and a chance to see the design and engineering process from start to finish.