Jonathan Haidt: Man on a mission

Haidt is travelling in Asia doing research for his next book, which will delve into morality. Photo: RAJA FAISAL HISHAN/The Star

The social scientist is researching Asian moral values and how we develop a ‘moral brain’.

WHEN Jonathan Haidt was five, he watched a man in a white spacesuit land on the moon.

From then on the little boy from Scarsdale, New York knew he wanted to be a scientist. He just never figured he’d become a social scientist – but here he is in Kuala Lumpur, on a trip through Asia to research his next book about how our minds work.

Perhaps that’s how you get when you’ve spent your career digging into the foundations of the moral mind.

In the introduction to his 2012 bestseller The Righteous Mind (in which he tackles the grand question of why people are divided by politics and religion), he confesses he wished for world peace as a teenager.

At 51, he’s adjusted that vision, settling for something a bit more practical: a world where competing ideologies are kept in balance, and fewer people believe that righteous ends justify violent means. 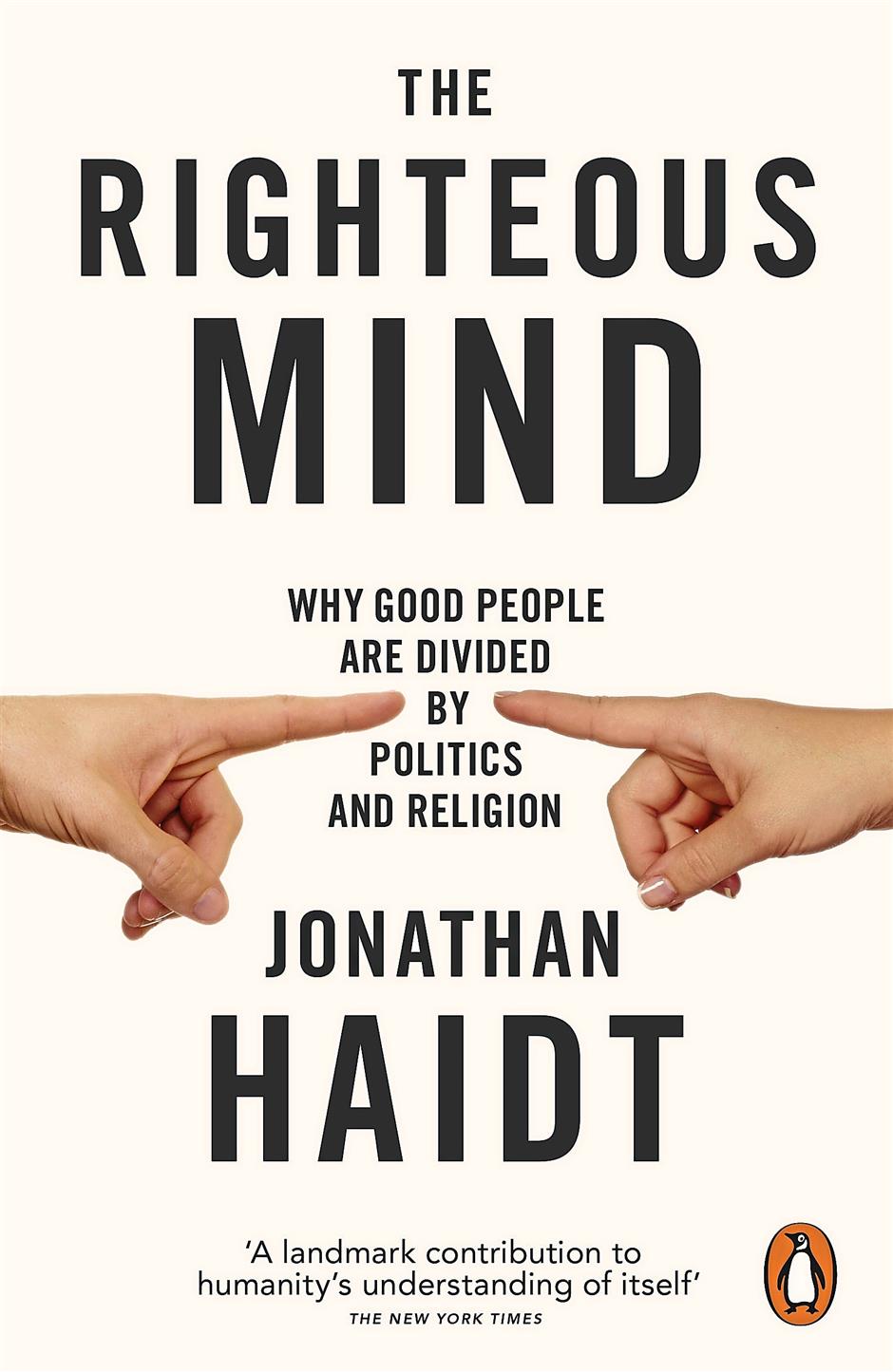 It’s still ambitious, but it’s a darn sight more achievable. And psychology, it turns out, can be useful in guiding us toward those goals.

Haidt wrote The Righteous Mind to explore why it is often so difficult to see eye to eye with those of opposing beliefs. The 2012 book was largely aimed at untangling the dilemma of extreme partisanship in American politics, but it also applies to other situations.

Haidt had plenty of fans, for instance, writing in to say thanks because they now understood their fathers-in-law a little better, and had passed them the book so they could have civil conversations!

The Righteous Mind is Haidt’s seminal effort to explain how political attitudes or values are an extension of our moral reasoning; and the reason why impassioned arguments between intelligent people so often seem to veer into the proverbial brick wall is that reasoning, rather than driving behaviour, really only evolved as a way to justify behaviour.

And you’d think the foundation of morals is based on reasoning – but morals are more deeply rooted in innate emotion, better described as intuition. Pretty shocking stuff, really.

It was a chance conversation that got Haidt into the field.

He’d been at the University of Pennsylvania for a week, flirting with the idea of studying the psychology of humour when Prof Jonathan Baron, an expert in the science of decision making, casually asked him: is moral thinking any different from other kinds of thinking?

This precipitated a protracted discussion and by the end of it, Haidt asked Prof Baron to be his supervisor, and turned his postgraduate thesis into a mission that would answer that question.

Back in the 1980s, when Haidt was beginning his research, the field of moral reasoning was still dominated by developmental psychologists. The prevailing assumption then was that morality was something we developed as we passed through different stages of reasoning ability. And sociobiology was still a bad word – just over a decade earlier, eminent biologist E.O. Wilson had been called a “fascist” for suggesting that natural selection influences human behaviour, and that moral intuitions are perhaps best explained by evolution.

The liberals who dominated the social sciences were terrified of supporting anything that looked remotely like social Darwinism (the extension of Darwin’s theory of natural selection to social phenomena, often associated with the implication that biological superiority underlines social success).

But by the time Haidt was done with his thesis, all evidence seemed to support the idea of a sociobiological model.

His work suggested that moral judgments and actions are caused more by intuition than by reason – a direct challenge to the rationalist paradigm (which was supported by psychology heavyweights like Lawrence Kohlberg and Jean Piaget) that logic and morality develop through constructive stages.

Haidt published his findings in 1993 and waited nervously for a response. To his disappointment, there wasn’t any.

“The people studying moral reasoning completely ignored me. They never responded, never made any rebuttal – I was really disappointed because I wanted a good argument, I wanted them to fight back!” Haidt recalls.

But the tide was shifting. It wasn’t just his work that was offering evidence that morality is innate.

Unfortunately, both papers came out in September – the same month as the destruction of the World Trade Center in the terror attack in New York City. Needless to say, scientific developments, even important ones, were overshadowed by more pressing news items.

A raft of evidence kept trickling in, however, and by 2004, the pendulum had swung. Opinion shifted in favour of the sociobiological model.

NEXT PAGE: The moral palate 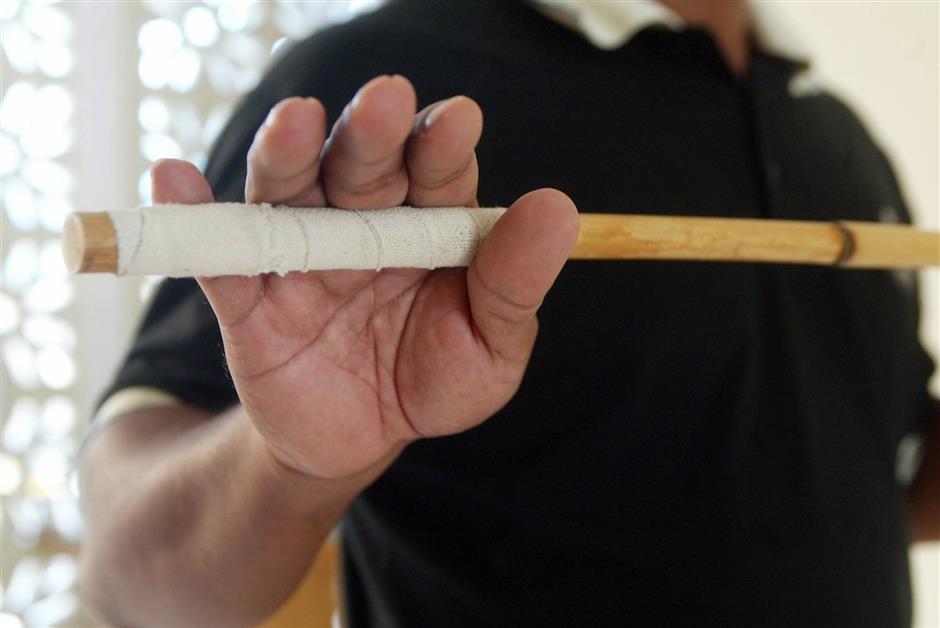 The ‘moral palate’ between cultures can differ – there is, for instance, a great difference in attitude towards caning in Asian and Western cultures. Filepic

Today, Haidt is a leading intellectual on social and evolutionary psychology, which examines how evolution has shaped the mind and behaviour of humans.

His first book, The Happiness Hypothesis (Basic Books, 2006), examines the implications of a biology where rationalism serves as justification for intuition, and how minimising discord between the two is the key to happiness.

Haidt builds on these ideas in The Righteous Mind, the popularity of which has probably been due in no small part to the deep divide in contemporary American politics.

“The goal was to write a book that both the left and the right could read and not feel alienated by,” explains Haidt. “I think for a lot of our modern problems, you really can’t solve it from within one framework.”

Haidt actually started his research with a view of helping the leftist Democrats fight back against the right-leaning Republicans. But he now sees himself as a non-partisan centrist.

“In doing the research and trying to understand everybody’s position, I ended sort of saying, oh that makes sense, and so does that.

“Every oppositional group is an expert on certain parts of morality, and sees problems and solutions the other side doesn’t see.”

To explain what makes up the moral palate, he asks us to visualise moral values like a set of taste receptors that we have developed to deal with different situations in our environment.

There are six: harm, fairness, liberty, loyalty, authority and sanctity.

The liberal palate, for example, is more attuned to harm and fairness, whereas the conservative palate is sensitive to a wider range of values that include liberty, loyalty, authority and sanctity. Which is why in American politics, conservative values seem to have a wider appeal.

The values the conservatives project embrace the ideals of social order, strong families, personal responsibility, and free enterprise. These values sit better with the large working class group, who are often alienated by leftist agendas on gender equality and gay rights – despite the fact that leftists policies on the expansion of social welfare programmes tend to champion the working class group.

Haidt says the trick is to get over our self-righteous biases and meet in the middle.

“I think for a lot of our modern problems, you really can’t solve it from within one framework.

“The left tends to apply policies that champion environmentalism, animal rights, and children’s and women’s rights for example – they are the witnesses for decency,” he explains. “However, in protecting decency, sometimes economic dynamism is sacrificed.”

He points to Europe, which tends to be great on social welfare but has a lower level of economic growth than the United States.

“It’s better to be poor in Europe, but in the long run, with globalisation, I think the European model will lead to less dynamism compared with Asia and America.”

In The Righteous Mind, he mainly discusses how moral values dictate an American’s stance and behaviour in the context of religion and politics in the United States. Haidt’s next book aims to see how these ideas apply in the wider context of global society.

The moral palate between cultures may differ, as different circumstances will lead to the activation of different sets of moral receptors on the moral “tongue”. Haidt wants to build on the idea of how our often culturally specific moral palates impact our balance of, in particular, two of the values he coined, “dynamism” and “decency”.

MORE ON THIS STORY: Development vs moral values