1 Multi award-wining poet Sudeep Sen feels ‘very, very lucky to be involved in poetry’ even if it’s not work that is financially lucrative. – GARY CHEN/The Star 2 Susan Barker knows that, in financial terms, writing is a ‘very insecure career’ but ‘it’s all I know how to do ... it’s not really a choice, it’s just something I have to do’. – ZAINUDIN AHAD/The Star

From atop a pregnant horse in central Mongolia, to a nearby fictional but strangely familiar Coal Island, and across the sea to where a bharatanatyam dancer mesmerises a watching Indian poet from the stage, this year’s George Town Literary Festival transcended time, emotion and space.

Housed in the Whiteaways Arcade in the heart of George Town’s historical inner city, the fest took audiences from the opulence and splendour of the Forbidden City’s Pavilion of Melancholy Clouds where a royal assassination is plotted to the desolate fringes of beautiful Sabah where a stateless community struggles not only for identity, but survival.

Now in its fourth instalment, the three-day festival held last weekend saw an array of activities centred on the written word and loosely linked to the theme “Capital”.

Through in-depth writing workshops; conversations with novelists, poets and activists; film screenings; and the launching of five new books, those who attended the fest received not only technical knowledge on writing and utilising literary devices, but enriched themselves with glimpses into the hidden world of creating, arranging, and publishing worthwhile works of literature.

For British novelist Susan Barker, 36, the process of book-writing is far from a linear, step-by-step process. Her latest novel, The Incarnations, ended up being a six-year undertaking with Barker immersing herself in the vibrant, bustling city of Beijing.

“The book ended up spanning 1,000 years of Chinese history, but I barely knew what I was going to write when I started it. I just moved to Beijing to do a three-month residency at the Red Gate Gallery and started living day-to-day life in the city – walking around exploring, observing, and pretty much just waiting to see what experiences the city would shape and what narratives the place would inspire,” Barker says during a lecture on her third publication.

Her other two books are Sayonara Bar (2005) and The Orientalist And The Ghost (2008), which is set in wartime and pre-independence Malaya. Barker says her plan for The Incarnations eventually became more and more ambitious, with the research becoming more and more prolonged.

“I really loved the process of writing the book, but sometimes I would be quite unsettled because it seemed like there was no end in sight and I had been writing this book forever. During the first couple of years, it was quite hard as I didn’t know what I was writing and the writing that I was producing wasn’t very good – the plot was implausible and the characterisation was quite weak,” she says.

Money was also an issue, as it is with many writers, and Barker moved from China to the US and back to Britain as she scrambled to find funding to finish the book.

“I basically went where there was an opportunity to live cheaply. I tried to stay as much of the time in China, but my only income was from the previous two books and different grants that weren’t really reliable sources,” she says.

Finally completed in January this year and published in Britain six months later, the book’s long genesis seems to have been worth it, as it has received several stellar reviews. The Independent newspaper, in fact, went as far as calling it “China’s Midnight’s Children” referencing Salman Rushdie’s celebrated 1981 work.

The Incarnations (review here) is set in contemporary Beijing and is centred on a dejected taxi driver named Wang Jun who begins receiving anonymous letters from someone claiming to be his soulmate not only in this lifetime, but in five previous incarnations.

The letters are haunting and disturbing and recount his past lives: a eunuch during the Tang Dynasty, a young slave boy during the invasion of Genghis Khan, a concubine to the sadistic Emperor Jiajing, a kidnapped Englishman during the Opium War and, finally, a Red Guard in the Cultural Revolution.

Similar to her two previous novels, the characters and backdrop of this book are relatively foreign to Barker, which posed added challenges to the writing.

“I’ve always been wary of being identified too closely with the protagonist, so when I write fiction, I usually try to write characters that are very different from me. My first book was set in Japan just because that’s where I was at the time.

“With my second novel, it was more of a conscious decision to write about Malaysia because my mother was born in Kajang (in Selangor) so I started researching the book in order to learn more about Malaysia.

“My grandfather is from China, so I feel a connection to the place and I sort of got into Chinese history through researching Malaysian history, especially the history of the Communist Party in Malaya which was very much connected to the Community Party on the (Chinese) mainland,” she says.

The authenticity of the characters in each of her works is paramount and is a constant concern for her. “Chinese friends who have read the latest book have said that the characters seem authentic, which means a huge amount to me, because it was an anxiety I had.”

She would constantly question herself, Barker says: “Am I portraying the characters correctly? Am I projecting too much of my Western ways and thinking onto them?

“All the women in the book are quite dis-empowered. None of them are really in control of their destiny and the trajectory of their lives are pivotal on the men they have chosen to marry and be with involved with. It’s not the ideal state of affairs, but I wanted to portray things as they are instead of how they should be,” she says.

With the book gearing up for release in the US, Barker says she’s itching for a new project to sink her teeth into. “People ask what motivates me to write but in actual fact, it’s all I know how to do. It’s a very insecure career in the sense that you lack support in terms of pensions, holidays and sick pay, and it’s also not very secure financially.

“For me, however, it’s not really a choice, it’s just something I have to do. It’s almost obsessive/compulsive, and if I don’t write fiction or have a project to work on, I feel awful about myself,” Barker says. 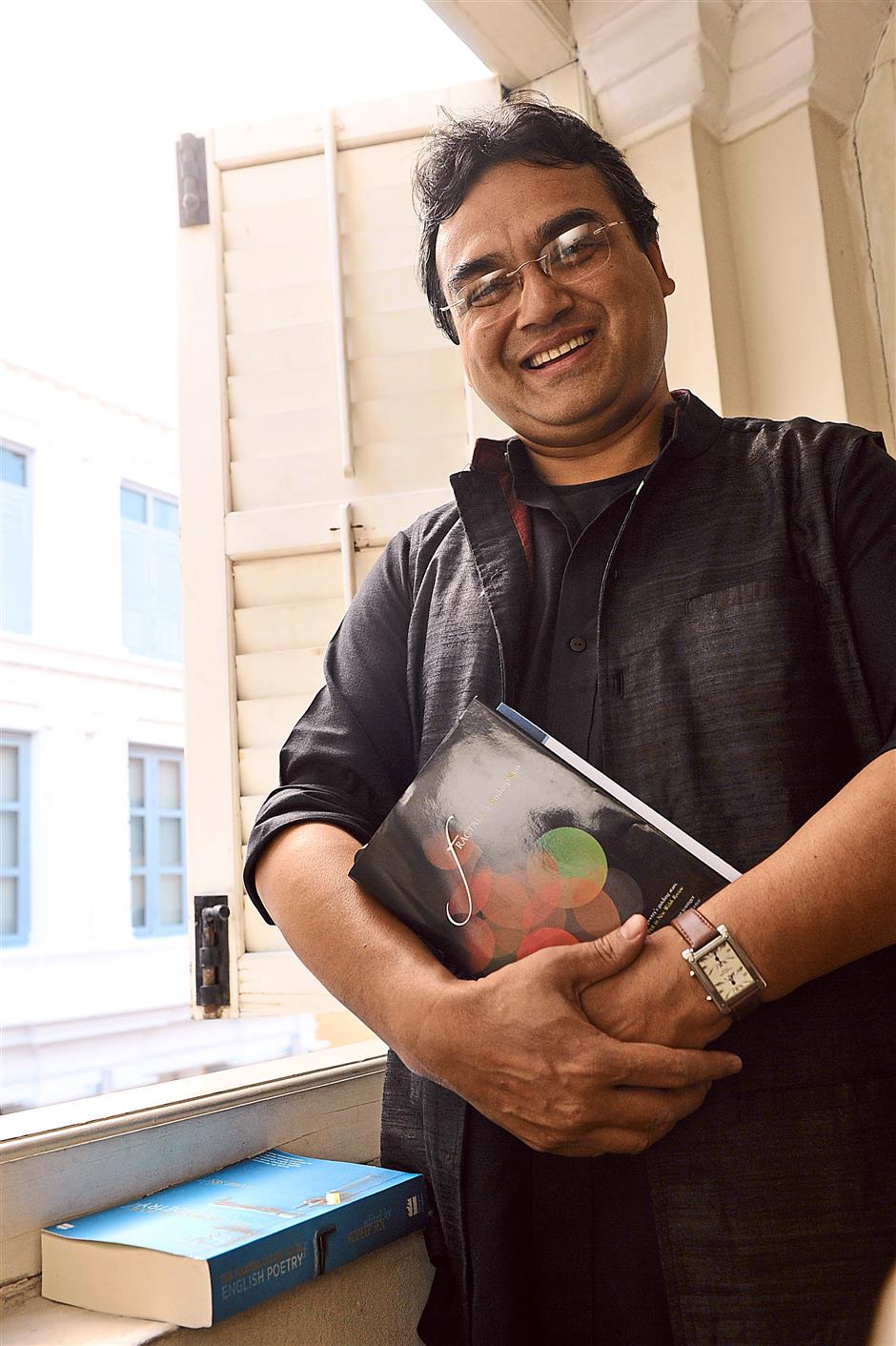 Multi-award-winner Sudeep Sen feels "very, very lucky to be involved in poetry", even if it’s not work that's financially lucrative.

As unstable and turbulent a life as a novelist is, there is perhaps one category of writers who have an even tougher time: poets. As acclaimed poet Sudeep Sen, 50, says, poetry is hardly the most popular literary genre. “Nobody reads poetry. I have absolutely no illusions about that!” he says good-naturedly during his festival lecture.

Despite it being a challenge to make a living writing full-time – like Barker, he works other jobs part-time so he can write – Sen still regards being able to write poetry as a privilege and a blessing.

“Poetry, ultimately, is probably the most important literary genre. It is there in daily life, it’s there in song, it’s there in birth, death, love and in the most significant, important moments in our lives. It’s actually all around us. All I can say is I feel very, very lucky to be involved in poetry in this way,” he says.

Describing poetry as the “most honest, quietest” part of himself, the multi award-winning Indian-born author compares writing with music, in that both need time and effort to perfect. “The skill of writing comes through practice. It’s like music – the more you do it, the more skilled you get,” he says.

Sen’s lyrical lines often present themselves in an effortless flow to listeners, but he stresses that a lot of hard work goes on in the background. “When inspiration does come to you, it is very crucial that you write it down. That inspiration is like a lump of clay in front of you that you chisel, and so on,” he says.

“You revise the poem and make it as tight and sinewy as possible. Sometimes it happens over a short period but more often than not, I do a first series of edits and then I find it quite useful to leave it aside for a while and come back with a fresh perspective,” Sen explains, adding that showing the work in progress to trusted friends can also greatly help.

And though most forms of writing are undeniably labours of love, Sen celebrates more emphatically the accomplishments and contributions of contemporary poetry.

“In India, I think it is only in the last 10 years that the real voice of contemporary Indian poetry has flowered. I have provocatively said that the best Indian literature that is written in English right now is happening in poetry – much, much better than the average novel that is coming out,” he says, lamenting the current pressures on novelists to produce books almost yearly to fulfil their contracts.

Defying his family’s expectation that he would follow Indian tradition and become an engineer (failing which, a doctor), Sen now spends four to five months outside his homeland teaching to enable him to write the remainder of the time.

Fortune may still be an elusive ideal, but Sen would not have his life any other way. “I didn’t choose poetry, poetry chose me and I’m happy for it. I think I have so many sins that I have to find a way to address God. Poetry, to me, is always a prayer,” he says.