Francis Lau on chicken and eggs

For Leong Hup and Teo Seng, it doesn’t matter whether the chicken or egg came first

THE nondescript and aged Wisma Wescourt in Jalan Klang Lama, Kuala Lumpur could be mistaken for an old office block poised for redevelopment. But that clearly isn’t the case. The crowded car park facing it, is testament that the building is well-occupied.

And the owner and main tenant of the building is no small fry. It is the headquarters of the oldest and largest poultry player in the country – the Leong Hup group.

And sitting at the top of this billion-ringgit empire is Malaysia’s quintessential “Chicken King” Tan Sri Francis Lau Tuang Nguang.

The short and stout Francis, a familiar face among seasoned business journalists in Malaysia, has not lost his booming voice, affable smile and sometimes comical manners.

The Lau family has had a long history in Malaysia. A large-framed family photo in Francis’ room, shot in 1982, shows the extended family in Johor, where its poultry business started. The 57-year–old Francis, who has been in the chicken business for all his working life, says he followed in his father’s footsteps, who was a small time chicken breeder.

On why he chooses this business, Francis is quick to point out that it is recession-proof and that he opts to only pursue the business he knows best.

“It is also the cheapest source of protein. You can have two eggs for your breakfast in the morning at a cost of less than RM1. What other protein meal can you get for that price?” Francis quips.

This is also why Leong Hup has successfully grown this business into Singapore, Indonesia, Thailand, Vietnam and the Philippines.

In that family portrait, another familiar face is present, that of Francis’ older brother Datuk Kevin Lau.

They make up the Lau brothers, who have a place in the corporate history of Malaysia, as the guys who once controlled the KFC business in the country. In the mid-1990s, the Lau family owned close to a third of KFC Holdings Bhd. When they controlled KFC, the Lau brothers are also known for having had to face a tough and painful corporate battle with Datuk Ishak Ismail.

That was KFC’s first major corporate saga that seemed to have set the stage for a string of corporate battles to besiege the fried chicken retailer over the years.

As the story goes, the Lau brothers, under political pressure, conceded defeat in that battle, and sold their business to Ishak.

Recalls Francis: “We sold at a good price in 1996 and soon after the Asian financial crisis came.”

The money was ploughed back into Leong Hup to build its farms. Leong Hup was listed in 1990, making it the first livestock company to list on Bursa Malaysia.

The group also owned Emivest Bhd, a feedmiller that was listed on the Kuala Lumpur Stock Exchange second board in 2002.

But in 2012, the two companies were privatised at a total cost of some RM700mil.

Since then, Leong Hup has grown locally and abroad. Leong Hup International has a significant business in Indonesia, where its company PT Malindo was listed on the Indonesia Stock Exchange in 2006 and today, it enjoys a market capitalisation of some RM1bil. 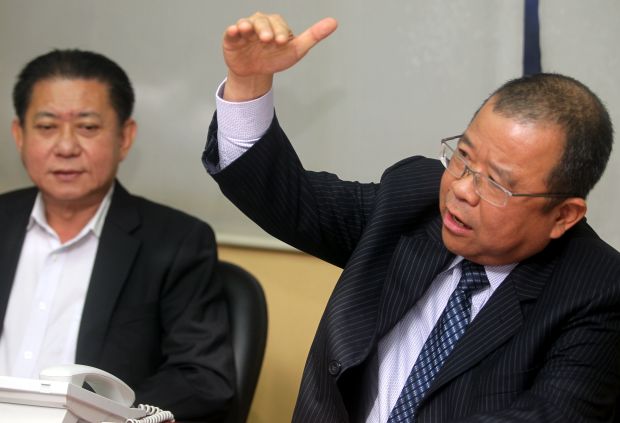 This figure is indicative of the fast growth that Leong Hup has achieved, considering its listed companies was privatised at a price of RM700mil just three years ago.

The current structure of Leong Hup International isn’t clear but it is assumed that this is the holding company that owns controlling stakes in all key assets, including the Malaysian business, PT Malindo and local egg producer Teo Seng Capital Bhd

Following from the Affinity deal, speculation is rife that Leong Hup International could be poised for a corporate exercise such as a listing.

Francis says he will leave the Leong Hup story for another day.

Coming back to the poultry industry, Francis explains that his tie-up with the Nam family and the interest in Teo Seng Capital involves Leong Hup and the Nam family holding 51.12% in Teo Seng through a private company, Advantage Valuations Sdn Bhd.

The Leong Hup group has a 51% stake in Advantage Valuations with the Nam family holding the rest.

The association between Leong Hup and Teo Seng goes back some three decades ago, says Francis, noting that the partnership between the Lau family and the Nam family was forged very early on.

Teo Seng’s managing director Nam Yok San says that they have long been in the egg producing business and know it well.

“Leong Hup as a group buys 1.6 to two million tonnes of raw material for feed stock per year. With this kind of volume, we can bargain for a discount of 2% to 3%, which is significant when our turnover is huge.”

Francis points out that efficiency in this business is crucial, considering the competitive landscape and the fact that eggs and chicken are still subject to price controls during festive occasions in Malaysia.

It is no surprise that Teo Seng enjoys one of the highest gross profit margins of around 24% (cumulative) over the last five years, Francis points out (see separate story on Teo Seng).

Teo Seong’s shares, which were off the radar of investors for a long time, had began to see interest a year ago, moving up by some 2.8 times.

Francis and his team from Teo Seng are also on an investor road show, to give the market an opportunity to endear itself with the country’s foremost “Chicken King”.