Factbox-Reaction to the death of Argentina soccer legend Maradona

The deal values MOL at RM2.64bil, making it one of the most valuable online payment service providers in the local scene. This price tag values MOL at 18 times more than its locally-listed peer GHL Systems Bhd, both of which are involved in online payment gateways. (Pic: Johor Sultan)

PETALING JAYA: The Sultan of Johor has made another investment in the corporate scene – this time by paying RM396mil for a 15% stake in Tan Sri Vincent Tan’s privately-owned MOL AccessPortal Sdn Bhd.

The deal values MOL at RM2.64bil, making it one of the most valuable online payment service providers in the local scene.

, both of which are involved in online payment gateways.

The value is even higher than the likes of MyEG Services Bhd that was recently awarded a contract by the Customs Department to wire up sales outlets to facilitate the collection of taxes.

Sources said MOL was seeking a listing on the US Nasdaq market and hence the valuation.

This is the second big transaction that Sultan Ibrahim Ismail has recently inked with Tan. 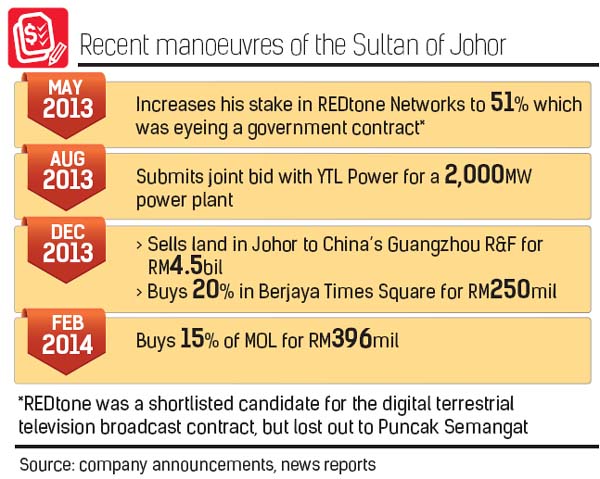 Berjaya Assets, subsequently, made reference to the Sultan’s “stature and business acumen” as part of the justification for the discounted price.

MOL is co-founded by chief executive officer Ganesh Kumar Bangah who built the company from scratch to become one of the biggest online payment service providers.

MOL was listed in 2003 making Ganesh, then only 23-years old, as the youngest CEO of a public-listed company. MOL, which was listed at a price of 75 sen, was subsequently privatised by Tan in 2008 at 62 sen.

Notably, MOL ended up with a small stake in Facebook in 2010 by virtue of selling the latter some patents related to social networking.

MOL received 700,000 shares in Facebook that was subsequently increased to 3.5 million shares after Facebook initiated a 5-for-1 split of the company’s shares.

It is believed that MOL has already disposed this block of shares post Facebook’s public listing in May 2012 although it is unclear at what price.

In yesterday’s deal, MOL said it was one of Asia’s largest online payment service providers and that it operated MOLPoints, an online games and digital goods micropayment platform.

Its holding company, MOL Global Pte Ltd would retain a 85% stake in MOL, which in turn is owned by Tan, and Ganesh.

When contacted, Ganesh declined to reveal further details and plans of the company.

Past reports indicated that the tycoon has appointed Credit Suisse Group AG and Deutsche Bank AG to work on MOL’s initial public offering (IPO) which is expected to be listed in the United States.

“MOL has grown to be a global Internet company that can trace its roots back to Johor where it was originally conceptualised 14 years ago. Tan, our major shareholder and myself, are honoured to have the Sultan as a shareholder of MOL as we grow MOL to the next level,” Ganesh said in the statement.

The company also said the Sultan was increasing its involvement in the technology sector to create more employment and job opportunities for the people of Johor.

Founded in 2000, the company currently handles over 60 million transactions annually, with an annual payment volume of over US$300mil.

It is one of Asia’s leading online payment service providers and is connected to over 360,000 physical payment channels with a localised presence across 12 countries.

Factbox-Reaction to the death of Argentina soccer legend Maradona