Forest feasts: Dining on the trail

Roast lamb, nasi lemak and pancakes in the wild jungle? A unique outdoor cooking course shows how it can be done.

UNLESS you’re very certain about your ability to find food in the jungle, eating in the wild is usually regarded as a rather humdrum spread of instant noodles, canned food or ready-packed meals.

But with proper storage and correct preparation of ingredients, one can actually dine well and in style in the rainforest for all three meals. A good meal is important: it works great as a morale booster, aside from providing the necessary calories to negotiate our Malaysian forests.

Camp cooking was the topic of a course for a mixed group of outdoor enthusiasts, organised under local outdoor retailer OGM Sdn Bhd. 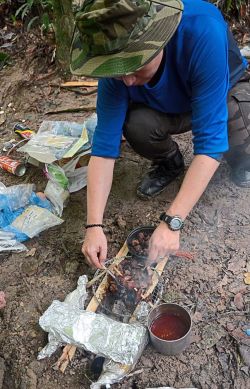 Skewers of meat roasting over a furnace made just from soil.

The half-day course took place at the Hutlista forest area, past the Batu Dam Reservoir in Selangor.

For the noobs, we had been instructed to bring our cooksets, as well as eating utensils (spork, Vargo titanium platter, maybe?) and other sundries like insect repellent, etc.

But as we spilled out of our cars and assembled for a short trek in, the regulars were bringing out boxes of charcoal – we found out why later.

Our instructor Vee had prepared flour for pancakes (with fruit mix thrown in), rice and packaged santan (coconut milk) for nasi lemak, garnished with a home-made sambal mix with ikan bilis. And this was just for breakfast.

To further emphasise that properly packed food took up very little space, Vee had packed the above (which eventually fed more than four), plus lunch and teatime ingredients, into a 90L military backpack for the short hike to our site.

After tying up our flysheets for shelter, the newbies began breaking out their camping cook sets. At this point, the more seasoned outdoors people reading this might want to skip a few paragraphs ahead. Nasi lemak in the woods – the right hand holding a packet of improvised sambal made from a mix of oil, chilli paste, salt and sugar in one ziplock bag. Rice and pre-fried ikan bilis are in the other bag.

But for those looking to get their first cookset, there are a few choices of cook stoves and fuel – gas, hexamine tablets, denatured alcohol, and if you’re hardcore (or in a survival situation), firewood from the forest floor.

From discussions with more experienced outdoors folk, many prefer gas because of its consistency and speed. It’s like bringing your home kitchen outdoors and a canister, if used judiciously, can last five or six meals before its exhausted.

The drawback is that for extended excursions, you’d probably need to bring a few cans with you (the load can be distributed with your hiking buddies).

Others, like my survival instructor Mohd Nor Fahmy, prefer going ultralight with denatured alcohol stoves. The only problem is that alcohol contains about half the energy (by weight) compared to gas, hence heat output will be less, and cooking times longer.

And you can’t adjust the flame output for recipes which call for simmering, which requires a smaller flame.

Alcohol stoves are also susceptible to the wind and a windscreen is essential against even a small breeze. Some alcohol stoves, however, come with an integrated windscreen. Last, but not least, most alcohol stoves don’t hold fuel on the move. If you have leftover fuel after your cooking, you have to either burn it off or pour it back into its container, which isn’t easy and takes time. Back to the course. It turns out that one merely needs some patience in packing up the stuff before heading out, and a modicum of cooking skill, to dine well in the forest.

For example, the milk for the pancakes was still in its tetrapak, but Vee had pulled out the flaps; and the flour and fruit mix was spread out in the ziplock plastic bag, so that both packs lay relatively flat against the backpack’s interior.

Another ziplock bag contained beef marinating in vinegar, which would be used later to cook curry for lunch. Meat marinating in vinegar leaves it with a sourish taste which thick curry cannot hide altogether. But this is one “wet preparation” method Vee told us of which could preserve meat on the trail, so that we could have chunky protein in our meals.

Aside from that, one can also try “dry” methods, such as smoking or even freeze-drying to rid your raw ingredients of their moisture before setting out, preferably a few days before. This also has the happy effect of making your packed food much lighter and less susceptible to microorganic growth, as the environmental conditions do not permit it.

While we noobs were flipping our pancakes and checking the nasi lemak to ensure it didn’t overcook, the regulars were busy cooking lamb chilli stew and roast beef with the supplies they’d brought.

And when both groups were done, we traded dishes. Meanwhile, the pièce de résistance of the outing – a whole lamb shoulder broiled au jus by my friend CT – was lifted out of its ground oven and uncovered. 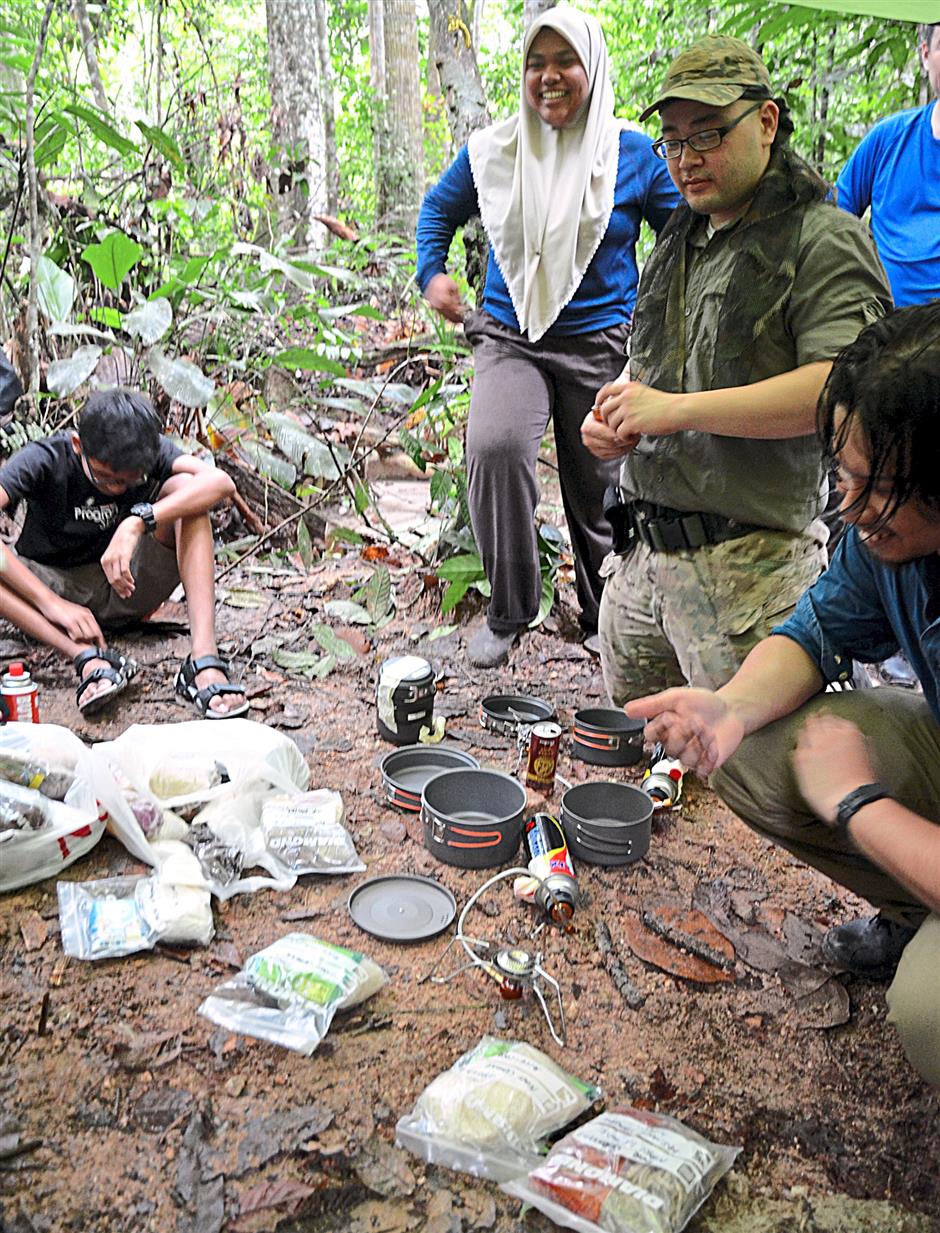 Different sets of meals, are all neatly packed in ziplock bags at the Hutlista forest of Selangor.

Tender and juicy, CT had merely sprinkled some rosemary on the raw meat before putting it on the fire, and the meat, stewing in its own juices, went very well with the mint jam someone had the foresight to bring. One may point out that the stew or lamb shoulder were only possible because the trek in was short.

Nonetheless, even at its basic, we were still dining well on the pre-prepared mixes by Vee, and to let us test it out at home, he also doled out a few other combinations such as meat soup and fritters.

Of course, learning all these in a single jungle session is one thing, putting them into regular practise is another. But that also means an excuse to go out and playing with all that new equipment you just bought from the local camping/outdoor shop.