A couple on a relaxing cruise in Russia sees the country in a different light.

It seemed like a good idea at the time. Last year, my wife and I booked a two-week, 1,448km river cruise through Russia for June 2014.

But three months before our departure, Russia grabbed Crimea from Ukraine, the United States slapped sanctions on Russia, and suddenly a warm Moscow welcome for American tourists didn’t seem to be in the cards.

When we finally arrived, though, Ivan wasn’t terrible. In fact, we and our tourist dollars, converted to rubles, were eagerly embraced. Although US travel to Russia dipped, what we got for staying the course was a fascinating journey through the streets, rivers and history of one of the world’s pivotal nations and America’s chief Cold War rival.

If I had trepidation prior to the trip, it wasn’t about the Russians but my fellow Americans. My wife and I are independent travellers. We like to make our own arrangements, set our own pace, split from the pack. But, at the invitation of a friend, we signed on for “Russia Revealed”, a trip offered by Boston-based Grand Circle Travel, which caters to older travellers, and our first cruise of any kind. The tsars’s winter palace is now the Hermitage Museum in St Petersburg.

As the trip approached, I began to fear too much face time with too many passengers, an endless string of bus rides and too many meals eaten on board rather than in quaint cafés. In my mind, it had the makings of a tourist gulag.

I need not have worried. We saw more of Russia and experienced more of it in safety, comfort and with expert guidance than I could have assembled on my own for the same number of days, particularly given the language barrier and the Cyrillic alphabet. Even better, the nine other Pittsburgh friends who made the trip with us were delightful and easygoing fellow travellers.

Our cruise ship, the M.S. Rossia, was no Caribbean ocean liner. It slept up to 220 passengers, and inside was stylish and comfortable yet space-efficient. It had no gym, no pool, no theatre, no casino – to me, all to the good. But Rossia did have a second-floor outdoor promenade that ringed the ship, where passengers either could burn off calories with a power walk or sit and watch the Russian forests go by.

The third-floor Tsar Bar, decorated with portraits of Russia’s old-time rulers, and the expansive fourth-floor President’s Lounge (as in Putin, Yeltsin and Gorbachev) were relaxing spots for evening refreshment and entertainment.

The two-week adventure included four days in Moscow, five days cruising and four days in St Petersburg. The city days were fast-paced due to various excursions, while the cruising days along the rivers, canals and lakes that link Moscow with St Petersburg were leisurely, with a daily port stop at a historic site and the option of on-board talks, entertainment or personal time in between. A Karelian folk music ensemble performing in Petrozavodsk, a town on Lake Onega.

We slept all nights on the ship and ate most meals – a surprisingly excellent mix of Russian specialities (borscht, fish pie, beef stroganoff, etc) and American favourites – on board.

Passengers were assigned to a programme director in groups of 35 or so. All of the directors were Russians who spoke impeccable English and displayed boundless enthusiasm. They also shared the duties of conducting the on-board diversions — a vodka tasting, a crash course on speaking Russian, a Q&A with Russian World War II veterans, blini- and pierogi-making demonstrations, talks on Russian history, etc.

In Moscow, our stroll through Red Square was a mix of the exotic and the familiar, this being the broad, 488m plaza where countless Russian military parades are showcased to the world. Along one side stands the towering Kremlin wall, along the other the dazzling GUM department store (actually, now a high-end mall). At the far end is iconic St Basil’s Cathedral, with its striped and starred onion domes a riot of colours and textures with a Disney World quality – except this church is the real deal, completed in 1561.

In the daytime, Red Square’s visitors represent a wide range of countries and languages, ages and attires; old Russians cross paths with punkish-looking twentysomethings sporting shock-red hair. At night, the lights cast an eerie glow for the hundreds who were still out and about. At both times, we felt safe.

The evening on our own gave us a chance to sample kvass and to drop into the Red Square McDonald’s. Kvass, sold in bottles alongside beer in grocery stores, is a fermented grain beverage made from brown bread. It’s mentioned in almost every Russian novel, and the alcohol content is so low even kids drink it, though I now wonder why. Ours tasted like flat, barely sweet root beer spiked with molasses.

McDonald’s, too, was a mild disappointment. Nothing particularly Russian on the menu – same Big Macs, fries and shakes. Our Happy Meal, though, came with a children’s book that was written, appropriately, in Cyrillics. Inside the Kremlin walls are not only the office of the Russian president and other government buildings but old churches, parks, an armoury-turned-museum and other relics of Moscow’s early days. A standout attraction is the gold-domed Cathedral of the Assumption, the 14th century structure where the tsars were crowned. Inside, the walls are covered, floor to ceiling, with icons and frescoes.

On another day in Moscow, a group of us enjoyed another breakaway moment – we took a short taxi ride to the winter home of Leo Tolstoy, Russia’s greatest writer. The rambling house-museum offers insights into the novelist’s life, including his many parlour visits from authors and composers, his hobby of shoe-making and his contemplative walks through an extensive garden. The M.S. Rossia approaching Lock No.3 on the Moscow Canal, where twin bronze sailing ships mark the towers.

We took Moscow’s well-patronised subway back to the dock. It is its own attraction, with underground stations resembling museum lobbies or hotel ballrooms. One stop featured bronze statues of Russian military figures. Another had crystal chandeliers hanging from a vaulted ceiling. The walls of the station near the Bolshoi Theatre contained terra cotta depictions of ballerinas.

St Petersburg doesn’t look nearly as Russian as Moscow. That’s because Peter the Great, who oversaw its construction 300 years ago and had visited other parts of Europe, wanted it to be his country’s “window to the West”. Situated along the Neva River and over a network of canals, St Petersburg resembles a classic city in Italy or France. It is also more English-friendly than Moscow, in both signs and the spoken word.

Because we were there in June, we experienced St Petersburg’s White Nights, a period when the sun, given the city’s northern latitude, barely dips below the horizon and it hardly gets dark. One night, after a performance of the ballet Swan Lake, we left the theatre at 10.45pm, but the June sky looked as if it were 8 o’clock.

Day or night, St Petersburg is one of Europe’s most beautiful cities. For history buffs, it also boasts one of the world’s greatest burial sites – the Cathedral of SS. Peter and Paul, where centuries of Russian emperors, empresses and tsars have their final resting place. The tomb of Peter the Great is only a few feet from Catherine the Great’s; the remains of Nicholas II and his family, whose deaths at the hands of the Bolsheviks ended the Romanov dynasty, occupy a chapel in the rear of the building. The Cupolas of the Terem Palace Church, and to the right, the dome of the Church of Laying Our Lady’s Holy Robe at the Kremlin.

Across the wide and choppy Neva is the Hermitage, which was once the tsars’ winter palace and therefore the target for centuries of rebellious peasant mobs. The building is now one of Europe’s top art museums, with works by Van Gogh, Michelangelo, da Vinci, Rembrandt and others.

Not far from the Hermitage is the home of Russia’s favourite poet, Alexander Pushkin. With some advance planning, I plotted the route and invited a small group to indulge my dead-writer’s fascination and check it out. When we reached Pushkin’s house, which stretches impressively along one of the canals, we learned it was closed that day. The gate to the courtyard was open, though, so we slipped in and took a few photos at the author’s statue.

What to do next? We went to the adjacent Pushka Inn, a stylish hotel-restaurant built in 1860, where we ordered drinks and shared crepes, caviar and potato pancakes while a silent video screen over the bar gave us, of all things, a tour of Pushkin’s house. It was better than being there.

First-time visitors to St Peters-burg marvel at the water that is present throughout the city. But water of a different sort distinguishes the Peterhof, Peter the Great’s stunning palace on the Gulf of Finland, a short drive away. Although the palace rivals Versailles in opulence and splendour, its Grand Cascade is a spectacular outdoor fountain system consisting of three waterfalls, 150 fountains with 2,000 jets of water and tiers of statues, all operated by gravity and without pumps.

With so much to cover in Russia’s two leading cities, it was almost a relief to have a five-day river cruise in between them. Although the Moscow Canal and the Volga River, in the early phase of the cruise, were working waterways with industrial barges, other parts of the navigation system – Onega Lake, Ladoga Lake and the Svir River, for instance – were in the middle of wilderness. Towering pines lined their banks, lone birds swooped the tree tops, and cellphone service was spotty. 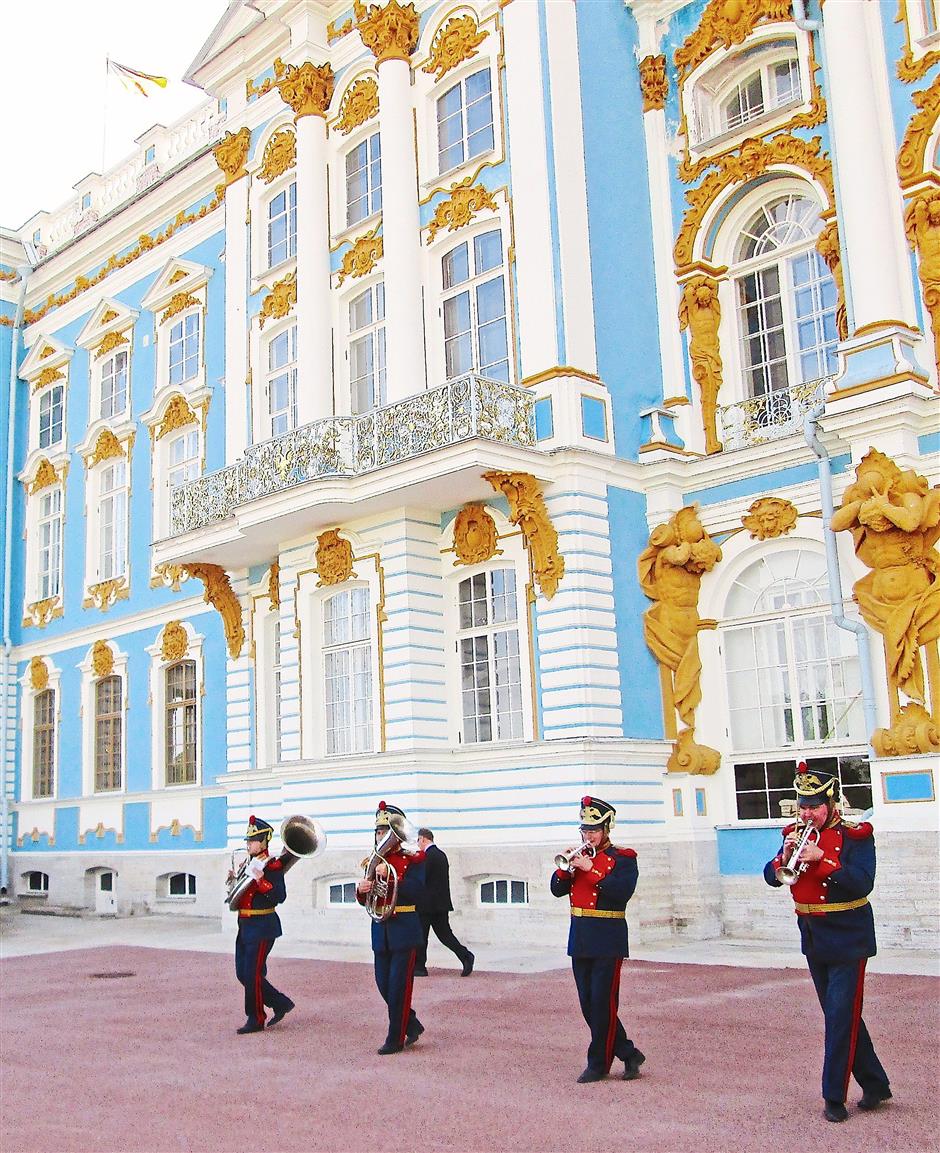 While the pace of the trip definitely slowed, our daily port visits were still eye-opening. Uglich, a town dating to the 10th century, was used by Tsar Ivan IV, aka the Terrible, as a base for attacks on the Tartars. The cheerful red walls and blue domes of the Church of St Dmitry on the Blood belie the dastardly deed committed there.

Prince Dmitry, Ivan’s eight-year-old son, was stabbed to death in 1591 under orders of a rival so he could not inherit the throne; the Russians erected the church in his honour.

In the sleepy village of Svir Stroi, travellers were split into groups of about 20 so they could visit the modest home of a babushka, the term of affection used by Russians for an older woman. Our babushka, Tatiana, seated us at a long table in her dining room while she served tea from a samovar and plates of homemade pirozhky, doughnuts stuffed with jelly or potato. She answered questions about life in her remote village, where the biggest employer is a hydroelectric plant, the pastimes are hunting and fishing, and deep snows are the winter norm.

Tatiana passed around worn photos in faded colour of her and her husband in younger days. She told us about her two adult sons and her hopes for them to keep working, marry well and stay close to home – not all that different from the hopes of American mothers. – Pittsburgh Post-Gazette/Tribune News Service