Lords of the ring

Both the young and young-at-heart will find plenty of fun in a quaint town in Wisconsin, thanks to the circus.

LET’S begin with the obvious, and most pressing, question: how in the name of Jumbo the Elephant (he’s real – look it up) did a south-central Wisconsin town of 12,000 become the circus capital of the world?

It all goes back to five brothers – Al, Alf, Charles, John and Otto – who were raised in Baraboo during the mid- to late-1800s. They had a knack for juggling, telling jokes, performing skits and engaging in general hilarity. By 1884, they had sketched out a routine and pitched a tent to create a show that they named for themselves: The Ringling Brothers’ Classic And Comic Concert Company.

It wasn’t long before the brothers bought covered wagons to take their show on the road, touring southern Wisconsin and much of Illinois with a shorter, punchier name – The Ringling Brothers Circus. Each winter, they returned home to Baraboo with their horde of tigers, elephants, wagons and the rest. Little did the brothers know that their lark would turn their hometown into a place that continues to live and breathe circus 130 years later – and proudly.

“It’s not uncommon to see an elephant walking down the street in Baraboo,” said Mary Hultman, a Baraboo resident for 15 years, who owns Raven House antiques store. “Which is kind of cool.” Inside the International Clown Hall of Fame.

Baraboo makes clear, upon your arrival, that you’re entering a special place. At the edge of town, beside broad Wisconsin cornfields framed by rolling Wisconsin hills, an official state marker declares Baraboo the home of the Ringlings; it is likely the nation’s only state marker that includes a nod to an animal called the “Hideous Hyena Striata Gigantium, the Mammoth, Midnight Marauding, Man-Eating Monstrosity.”

Just down the road is another important marker. In the front yard of the otherwise innocuous small-town bank Badgerland Financial, a plaque proclaims it is the site of the first Ringling Brothers performance, on May 19, 1884. Admission cost 25 cents.

Modern-day Baraboo is much like any charming Midwest town and was ranked fourth on last year’s “20 Best Small Towns to Visit” by Smithsonian magazine. An old courthouse, crowned by a clock tower, sits at the heart of the downtown. It is ringed by the usual small- town businesses: a drugstore, an antique shop, restaurants and a theatre. And, in this case, an International Clown Hall of Fame and Research Center.

Housed under the same roof as a gun dealer and a store that sells prom dresses, the International Clown Hall of Fame was founded in 1986 in Delavan, Wisconsin. After a brief stop in Milwaukee and three years in storage, it reopened in Baraboo in 2010.

“The whole community has been so overwhelmingly supportive,” said Greg DeSanto, a performing clown for 29 years who is executive director of the International Clown Hall of Fame (which is 72 inductees strong). “They’re supportive of anything circus-oriented.”

The museum boasts a fascinating swath of memorabilia, from Chester “Bobo” Barnett’s clown car (“He was a big guy in a little car with seven dogs, a skunk, a trumpet and two suitcases,” said DeSanto) to a 100-year-old costume and makeup kit from Edwin “Poodles” Hanneford, who performed on Broadway and palled around with Charlie Chaplin. 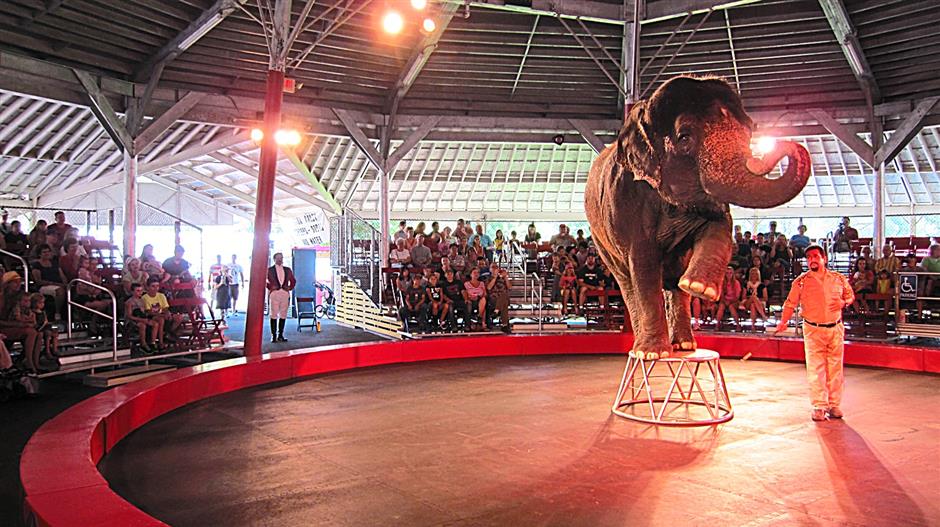 “I think we have the largest collection of clown artifacts in the world,” said DeSanto. “In Baraboo, it’s very welcomed and appreciated – probably more so than if we were anywhere else.”

Reminders of the town’s circus roots lie in all directions. There’s a “wall of fame” on the courthouse square honouring circus performers who have lived in town. The theatre on the square was built by, and is named after, Al Ringling. His stately stone mansion, built in 1905, sits around the corner from downtown. Even the street boxes for the local newspaper – The Baraboo News Republic – bear an image of a clown.

But the biggest draw sits just south of downtown, on 25.5ha split by the twisting Baraboo River: Circus World.

Housed on the Ringlings’ original winter quarters, Circus World is both a museum and a living, breathing circus. It is home to a mind-boggling amount of history – thousands of posters, wonderfully ornate wagons from across the decades and the globe and a room full of honking, clanging, clattering Big-Top musical instruments.

Visits begin in a museum just as dazzling to adults as to children, which includes one of the horse-drawn wagons that the Ringling brothers used for travel during the first six years of their show. A full day of activities awaits in the park, including a magic show, a performance of those circus instruments and a Big-Top performance.

My day began with the fast-paced circus instruments concert. Lasting about 40 minutes, it takes place in the Ringlings’ former elephant quarters, where rusted steel hooks once used to chain the elephants still hang from the walls.

In true circus style, the master of ceremonies seemed barely to take a breath as he hopped from massive instrument to massive instrument, chiming out magical blasts of noise from a Hammond organ, bells, a calliope, shaker chimes and rub chimes. 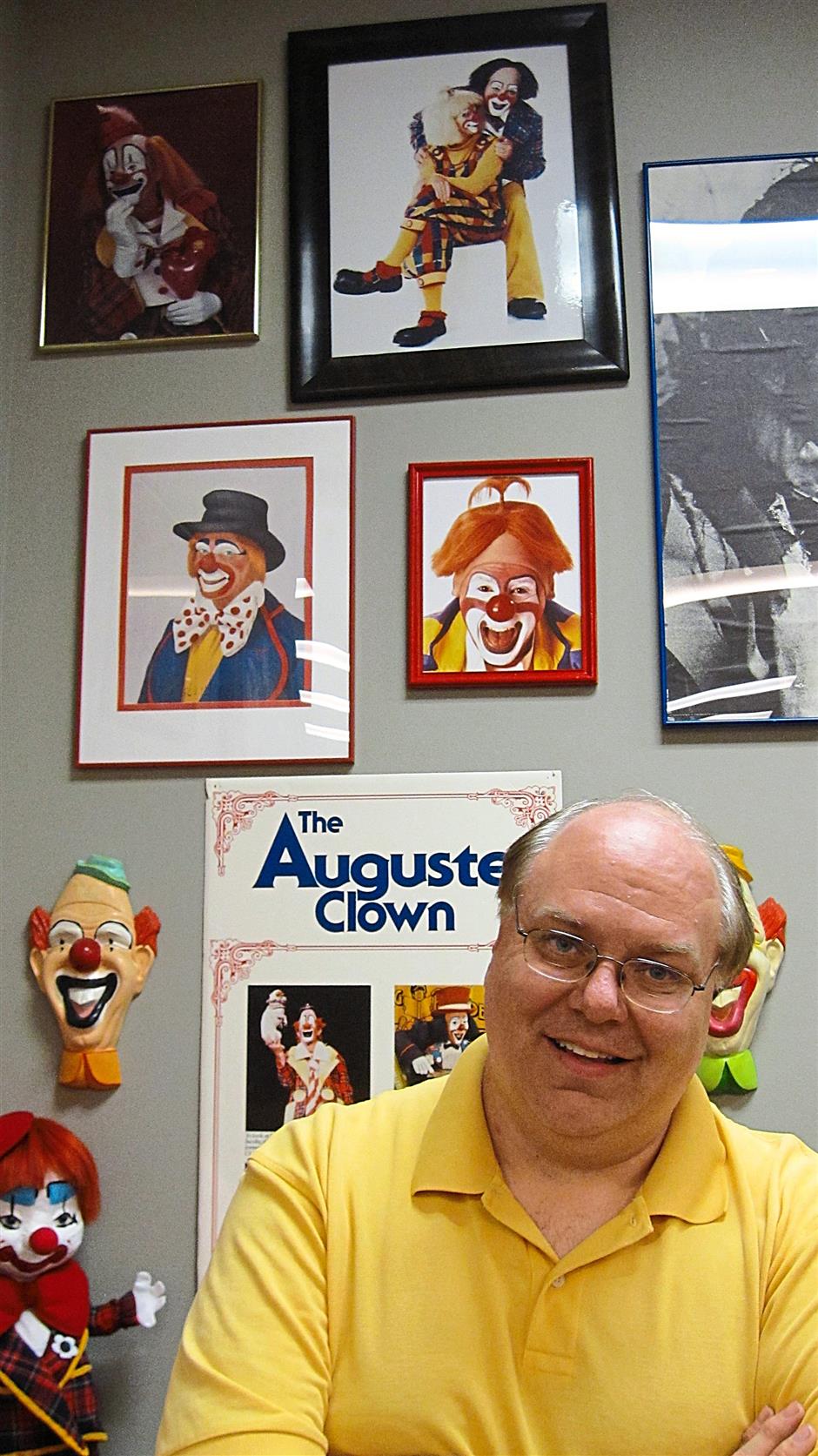 Executive director of the International Clown Hall of Fame Greg DeSanto is a former Ringling Brothers clown; his wife, also a clown, is pictured in the highest photo above his head.

On the way out, we passed a cannon that said “HUMAN CANNONBALL” on the side.

Then it was on to the magic show, where the illusionist executed a bagful of familiar and entertaining tricks, including a relatively convincing version of the put-the-lady-in-the-box-and-send-swords-through-the-box-but-when-the-box-is-opened-the-lady-is-just-fine trick.

The main show was the Big-Top performance, which made for a brisk, amusing hour of what you’d expect from a Big Top: a family of Czech unicyclists, a leaping dog, a leaping dog with a cat on its back, a contortionist who fit himself into a disturbingly small clear box, a green-haired woman and an elephant that sat on a tiny stool.

At the end of the show, Circus World offered the opportunity to have a photo taken with a long, thick snake. The gap-toothed children seemed far more open-minded about the possibility than I. — Chicago Tribune/McClatchy-Tribune Information Service