A report claims that a journalist at the Mail on Sunday found the British prime minister’s alleged number within seconds, and after adding it to WhatsApp, a profile came up with a picture of Truss taken last Christmas. — AP

LONDON: The personal mobile number of British Prime Minister Liz Truss and other senior politicians was found to be available for sale on the Internet on a website of hacked numbers, local media reported on Oct 2.

According to a report by Anadolu Agency, a US-based website, which was not named, charges £6.49 (RM34) for a week’s access to a database of phone numbers taken from previous data breaches and cyberattacks.

It reported that a reporter at the Mail on Sunday found the prime minister’s alleged number within seconds, and after adding it to WhatsApp, a profile came up with a picture of the prime minister taken last Christmas.

Alongside the prime minister, 25 other Cabinet ministers also had their phone numbers on the website, including Kwasi Kwarteng, the finance minister; Ben Wallace, the defense secretary; and James Cleverly, the foreign secretary.

Opposition Labour leader Sir Keir Starmer’s number was also available, alongside a half dozen of the shadow cabinet.

It reported a government spokesman said: “We take cyber security extremely seriously and we have agencies like the National Cyber Security Centre to help businesses and individuals protect their personal information from cyber threats.

“While we don’t comment on specific incidents, the government is aware that websites exist that aggregate details from historical data breaches, therefore much of the data on these websites is old and incorrect.

UK’s ‘other Liz Truss’ wisecracks her way to Twitter fame 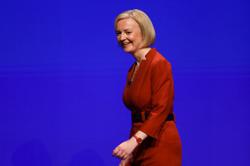