TOKYO (Reuters) - Japan's Mitsubishi UFJ Financial Group Inc will launch a new company that will temporarily buy up companies' inventories, including semiconductors, to ease the financial strain on them, the Nikkei newspaper said on Tuesday.

The move comes as more companies are being forced to keep larger inventories on hand to deal with ongoing disruptions in the global supply chain. But having to hold excessive inventory carries risk, including potential issues with cash flow.

The main banking arm of Japan's largest lender will launch the company, MUFG Trading, which will temporarily hold company inventories and sell back to them as needed, the Nikkei said.

No one was immediately available for comment at MUFG.

The new company will make a profit from the difference in what it pays for the inventories and what it sells them back to its clients for, it said.

The bank expects inventories to be a range of commodities from semiconductors to corn, the paper said.

Toyota Motor Corp was initially one of the few automakers that was able to cope with a shortage of semiconductors due to a large stockpile of them, before being forced to cut back production this year. 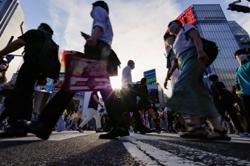