At a bar in Brasilia, two longtime members of Brazil's Workers Party retweet messages supporting Luis Inacio Lula da Silva on their cellphones, as part of his campaign's drive to fight the overwhelming presence of President Jair Bolsonaro on social media.

"We will not stop. Our battle, too, is online," said Ze Augusto, a retired professor, looking at his screen.

With a little more than four months to go until Brazil's presidential election, Lula, 76, has a comfortable but declining cushion in the polls.

But on social media he is far behind in popularity to the far-right president, who will probably be his opponent in a run-off on October 30.

When Bolsonaro came to power in 2018, a key tool in his victory was an adept social media campaign run by his son Carlos. It was based on propaganda, disinformation and the political destruction of opponents.

Lula, who served as president from 2003 to 2010, does not use a cell phone and has taken part in five election campaigns in which social media did not yet exist. His aides decided months ago to go on the counterattack online.

It raised the number of messages the campaign sent and the interactions on its accounts. It also created profiles on new social media like TikTok and won support from famous people in Brazil like the singer Daniela Mercury and a social media influencer named Felipe Neto.

It also launched something called Lulaverso, a campaign website designed for young people, where users can join pro-Lula groups on major social media and share stickers and GIFs of the leftist icon dancing or wearing sunglasses.

After Lula officially declared his candidacy this month, the party overhauled the campaign and named as its communications chiefs former lawmaker Rui Falcao and Edinho Silva, who was a government minister under president Dilma Rousseff (2011-2016).

"We are going to create a giant chain of activists and sympathisers and increase our communications means more and more so we can defeat Bolsonaro on every front," Falcao told AFP.

Lula's campaign is doing well in tradtional media outlets. But Bolsonaro's outreach from his ecosystem of pages and groups on digital platforms goes further because it targets everyday people rather than party members, said Pablo Ortellado, a professor of public policy and management at the University of São Paulo.

The Lula campaign's communication "is endogenous. It strengthen's people's conviction. But it does not manage to punch through the walls of its groups, which have a very defined ideology and political identity," Ortellado said.

Bolsonaro and Lula have very different ideas about freedom of expression.

Bolsonaro advocates easing rules governing social media platforms, several of which have erased some of his content on grounds that it spread fake news.

Lula backs regulating social media but has never really gone into detail on how he would do this. And his party works against generating or forwarding false news, via a campaign of "stickers" that warn against and label falsehoods from Bolsonaro supporters.

Brazilian electoral authorities have taken measures to prevent the campaign, which officially begins in August, from becoming another disinformation war, as happened in 2018, in particular on WhatsApp.

"We want to win the election with the truth," said Ze Augusto. – AFP 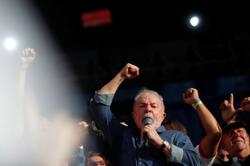