China’s swimmers have shot off the blocks like rockets at the Tokyo Olympics and, along with hard work and talent, the success is in part thanks to missile-related technology, according to the country’s biggest state-owned space company.

China Aerospace Science and Technology Corporation (CASC) said on Friday space scientists came up with a compact version of a guidance system used in rockets to help swimmers refine their technique and cut down on drag.

The technology worked with a traditional camera-based system to “provide a scientific basis for the coaching staff to draw up training plans, optimise techniques and reduce drag”.

They generally involve camera-based tracking systems similar to those used in the movie industry, and capture the actions of various body parts.

But at the elite level, minute changes that are not visible to the eye can make all the difference and more powerful technology is needed to capture the information.

And that is where the space scientists came in, according to CASC. To hit targets more than 10,000km away, intercontinental ballistic missiles use an “inertial guidance system”.

The systems rely on sophisticated gyroscopes to track motion and determine location and missile position when satellite signals are not available.

The gyroscopes are extremely precise but also bulky and heavy on a rocket.

CASC said space scientists spent more than a year modifying the technology and reduced the weight of a high-precision gyroscope to just a few grams, so it could be worn comfortably by a swimmer on shoulders and other joint areas without hindering movement.

The athletes were then positioned in a wind tunnel and tracked as they “swam” against the wind.

The simulation allowed the scientists to calculate the precise drag produced by different movements, CASC said.

The assessments were then developed into recommendations on ways the swimmers could refine their technique and manage their body shape. 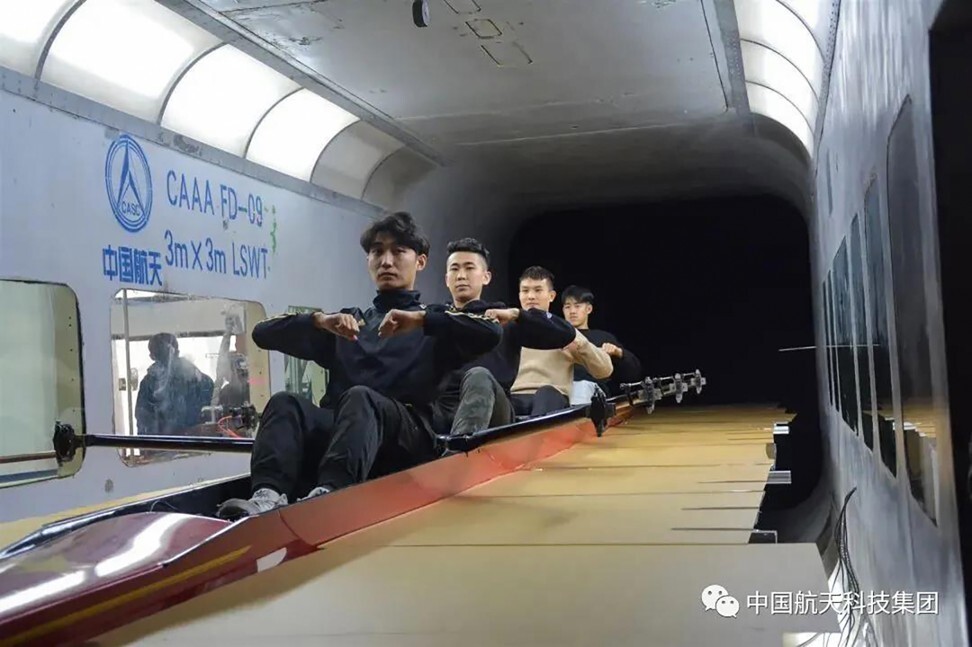 China’s rowing team, which won a highly anticipated gold medal at the Games, also used a wind tunnel in their training.

The drill brought many challenges to space scientists, however, because they had to simulate the interaction of two types of fluids, the water and wind, to find the best way to coordinate the movements of four athletes in a 12-metre boat, CASC said.

Most of these training sessions were conducted in research facilities for the development of aircraft or missiles. But the delicate sensors at the facilities were not designed to cope with living, breathing, sweating human beings.

A new wind tunnel dedicated entirely to sport was completed in Beijing last year to help improve performance in international competitions, including the next Winter Olympic Games to be held in China, according to the General Administration of Sport of China.

Space technology has also been deployed in other countries to enhance performance in the pool.

Before the Beijing Olympics in 2008, Nasa used its wind tunnel to help the US national swimming team find the swimsuit material with the smallest drag, according to the agency’s website.

Records fell but full-body versions of the suits were later banned because not all athletes had access to the technology.

In recent years China has embarked on a “civilian-military fusion” strategy to integrate research and development in military and civilian sectors for a broader range of applications with disruptive technologies.

Most of China’s new wind tunnels are for military research, especially the development of hypersonic aircraft that can travel at five times the speed of sound or beyond.

In the mountains of northeast Beijing, the world’s most powerful hypersonic wind tunnel is near completion.

The JF-22 tunnel will be able to simulate flight conditions up to Mach 30 to help build an aircraft that can transport 10 passengers to anywhere on Earth within an hour by 2035, according to some scientists involved in the project. – South China Morning Post