By Tracy Qu and Minghe Hu

Jack Ma donated nearly US$500mil in 2020, a year that ended with his companies Alibaba and Ant Group facing mounting regulatory pressure from Beijing. Tencent founder Pony Ma and ByteDance founder Zhang Yiming also made the top five, with China’s tech industry becoming the most charitable for the year. — SCMP

Ma, who retired as Alibaba’s chairman in 2019, has largely faded from public view since a controversial speech in Shanghai last October that was later linked to the Chinese government scuttling the initial public offering of Ant Group, the fintech offshoot of Alibaba also founded by Ma. Since then, he has largely focused on hobbies and philanthropy, his close business partner Joseph Tsai said in an interview last month.

For 2020, Ma and Hangzhou-based Alibaba had combined cash donations of 3.2bil yuan (RM2.09bil). Pony Ma Huateng and his Shenzhen-based company Tencent Holdings, China’s most valuable technology giant, ranked third with 2.6bil yuan (RM1.70bil) in charitable giving. Zhang Yiming, together with his Beijing-based company ByteDance, operator of TikTok, came in fifth, donating 1.2bil yuan (RM785.01mil) for the year, according to the Forbes list.

Donations from Chinese tech billionaires have become more frequent in the midst of increased pressure from Beijing on Big Tech firms to put social development ahead of profit and serve the national agenda.

Most recently, the Jack Ma Foundation, founded in 2014, pledged on Wednesday to donate 50mil yuan (RM32.70mil) to aid flood-hit Henan province, where capital city Zhengzhou is facing catastrophic damage and several deaths from torrential rainfall. Several Big Tech firms, including Alibaba and Ant Group, have separately announced their own donations to relief efforts.

Wang Xing, CEO and chairman of Beijing-based on-demand delivery giant Meituan, ranked 22nd on the Forbes list. Last month, Wang donated a US$2.3bil (RM1.50bil) stake in his company to his own philanthropic foundation, to be used for funding education and scientific research. The donation came months after the government opened an antitrust investigation into Meituan.

ByteDance’s Zhang, who announced in May that he plans to step down as CEO of the world’s most valuable start-up by the end of the year, also donated 500mil yuan (RM327.01mil) last month to set up an education fund in his home city of Longyan, in China’s eastern Fujian province.

To be included on this year’s list, individuals needed to have given away at least 22mil yuan (RM14.38mil) more than double the 10mil yuan (RM6.54mil) needed last year. Amid a surge in charitable giving to aid in fighting the Covid-19 outbreak, 32.7% of last year’s donations went to the medical industry. Education and poverty relief each made up about 22.5% of donations.

Tech titans’ increased presence at the top of the list reflects how much things have changed in the last year, amid increased reliance on Internet platforms because of the pandemic and Beijing’s Big Tech crackdown. Alibaba’s Ma ranked fifth last year, giving 1.12bil yuan (RM732.67mil) in 2019. 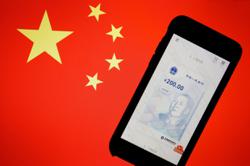