By Subrat Patnaik and Ben Klayman (Reuters) -Lordstown Motors Corp on Monday announced the sudden departure of its chief executive and finance head, just days after the electric truck maker warned that it may not have enough money to stay in business over the next year, sending shares down more than 20%.

The resignations of founder and Chief Executive Steve Burns and Chief Financial Officer Julio Rodriguez come as the company's board reported conclusions from an internal investigation into claims made by short-seller Hindenburg. Burns is Lordstown's largest shareholder with a stake of more than 26%, according to Refinitiv data.

Lordstown acknowledged it had overstated the quality of pre-orders for the company's electric trucks, but rejected as false Hindenburg's accusations it had overstated the viability of its technology and misled investors about production plans. Goldman Sachs, which advised the blank-check company that merged with Lordstown last fall and helped put together the deal's financing, declined to comment.

When it announced its deal to go public through a reverse merger last August, Lordstown said it had pre-orders for its Endurance pickup truck worth about $1.4 billion. After Hindenburg accused the company of misleading investors on the pre-orders, Lordstown said they were non-binding and has since said it has no binding orders.

The company named lead independent director, Angela Strand, as executive chairwoman to oversee the firm's transition until the appointment of a permanent CEO. She will take part in a media appearance Lordstown had scheduled for Burns and other executives on Tuesday.

"We remain committed to delivering on our production and commercialization objectives," Strand said in a statement. Lordstown did not make Strand available for an interview.

Strand, 52, is managing director of an advisory firm specializing in technology and business strategy, and has worked with fleets and fleet management companies, the types of customers Lordstown is aiming to win after Endurance production is scheduled to start in September.

RBC Capital Markets analyst Joseph Spak said Burns was not the right fit for Lordstown as it attempts to build production and a change in strategy could occur with new leaders, putting at risk the company's advantage of being the first with an electric pickup on the market.

Lordstown disclosed customer deliveries won't begin until the first quarter of 2022, putting it just ahead of the spring launch of Ford Motor Co's electric F-150 Lightning.

Lordstown also disclosed in a regulatory filing it has hired a unit of AlixPartners, an advisory firm known for helping companies restructure operations.

Since the going-concern warning last week and a free fall in its share price, the company has tried to allay some worries by saying it was in talks with multiple parties to raise funds.

"It was untenable for the company to secure necessary new capital with a management team widely seen as potentially not leading the company into the next era of its development," Morgan Stanley analyst Adam Jonas said in a research note.

Lordstown and fellow EV maker Nikola, both of which went public via acquisitions by SPACS, have become a target of short-seller Hindenburg. Both companies saw their CEOs subsequently resign.

In March, Hindenburg disclosed it had taken a short position in Lordstown shares, saying the company had misled consumers and investors.

Subsequently, the U.S. Securities and Exchange Commission (SEC) had asked the company for information related to its SPAC merger and pre-orders of its vehicles.

Hindenburg Research founder Nathan Anderson said the news was not a surprise.

"Today's disclosure largely verifies the concerns we raised," he said in an interview. "The top two executives don't resign when allegations are meritless."

(Reporting by Chavi Mehta, Subrat Patnaik and Anirban Sen in Bengaluru, and Ben Klayman in Detroit; Editing by Anil D'Silva and Jonathan Oatis) 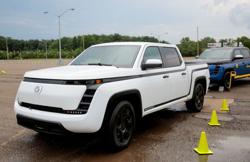