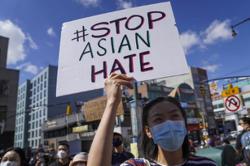 Police won’t say how much it’s spending to lease Digidog – it has a base purchase price of about US$74,000 (RM305,065) – and when asked about the robot last week, Shea (middle) refused to answer any questions. — AFP

Digidog is having a ruff time.

The NYPD’s 70-pound robotic dog, already criticised as a creepy-looking surveillance tool, was acquired without properly notifying the city, according to Comptroller Scott Stringer.

The police department, which Stringer said previously wouldn’t provide details about Digidog, denied that the robot is used for surveillance. But the agency also claims the leasing didn’t break any rules, because it was not required to report the purchase of top secret investigative tools at the time. Leasing Digidog was classified as confidential because it can be used at scenes involving terrorist bombers, the NYPD said.

Stringer was not satisfied with the explanation.

“The NYPD needs to get its story straight,” said Stringer spokeswoman Hazel Crampton-Hays. “We’ve been trying to get to the bottom of this purchase for weeks and the NYPD failed to disclose the details.”

Last August, Stringer terminated a memorandum of understanding that allowed police to keep its spending on surveillance technology secret.

The move followed the passage of the Public Oversight of Surveillance Technology Act, requiring the nation’s largest police department to make each of its surveillance tools public and explain how it protects any information collected.

Digidog has cameras and lights affixed to it and a two-way communications system that allows the cop remotely using it to assess situations and keep other officers out of harm’s way.

But when video of Digidog in action went viral recently, critics derided it as a four-legged drone that raises concerns about privacy and bias.

And when Stringer’s office asked about the mechanical dog police said it was obtained as a “lease or small purchase”.

Police won’t say how much it’s spending to lease Digidog – it has a base purchase price of about US$74,000 (RM305,065) – and when asked about the robot last week, Police Commissioner Dermot Shea refused to answer any questions.

“I think we have better things to worry about,” he said.

But in a Thursday letter from Deputy Comptroller Lisa Flores to Kristine Ryan, the NYPD’s deputy commissioner for Management and Budget, police were accused of doing an end around the city’s procurement procedures.

The lease is not listed in the city’s computerised financial management system – and the contract with the vendor was not registered with the Comptroller’s office, as required. That, Flores wrote, “leads me to believe the procurement was made in violation of applicable city laws and statutes”.

“This raises serious concerns for my office about the oversight and transparency associated with this purchase,” the letter said, “and potentially other NYPD purchases as well.”

Police have now been asked to provide detailed information about how they leased Digidog and if they have spent any other money since the POST Act took effect.

“The NYPD needs to follow the rules, just like any other city agency,” Stringer said. “I’m demanding answers about this robot dog and any other unauthorised NYPD purchases because New Yorkers deserve transparency, accountability, and oversight in public safety.”

But police said it leased Digidog before the memorandum of understanding expired, and “because the robot is being tested for use in hostage, terrorism bomb and hazmat situations it was properly classified as a confidential expenditure.” – New York Daily News/Tribune News Service