BERLIN (Reuters) - European industry chief Thierry Breton said on Thursday there are now 22 EU member states joining forces in a new alliance to support the local production and development of semiconductors to reduce the bloc's reliance from foreign suppliers.

Speaking to reporters in Berlin following talks with German Economy Minister Peter Altmaier, Breton underlined the European Commission's ambition to double Europe's market share in global chips and semiconductor production from 10% to 20% by 2030. 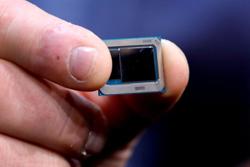