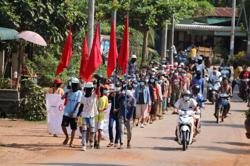 Having previously been accused of inaction in the face of political turmoil fomenting on its platforms, Facebook is taking on a more active role in a conflict it sees as clear-cut. — AFP

Facebook Inc has widened a ban on pages linked to Myanmar’s military and barred advertising from affiliated commercial entities, stepping up its opposition to the coup in the South-East Asian nation.

The Menlo Park, California-based social media giant’s ban extends to Instagram as well as Facebook and includes military-controlled state and media entities, building on earlier suspensions of pages linked to the armed forces.

Treating the situation as an emergency, Facebook has been mobilizing Myanmar nationals with native-language skills to help moderate content, putting additional protections in place for journalists and curbing the reach of military spokespeople and misinformation. Myanmar’s ruling regime had earlier this month called on internet service providers to block access to Facebook.

"Today, we are banning the remaining Myanmar military (‘Tatmadaw’) and military-controlled state and media entities from Facebook and Instagram, as well as ads from military-linked commercial entities,” Facebook said in an emailed statement. "Events since the February 1 coup, including deadly violence, have precipitated a need for this ban. We believe the risks of allowing the Tatmadaw on Facebook and Instagram are too great.”

Having previously been accused of inaction in the face of political turmoil fomenting on its platforms, Facebook is taking on a more active role in a conflict it sees as clear-cut. The U.S. government has condemned the Feb. 1 coup and President Joe Biden has put sanctions in place against its leaders. Facebook said it based its decision on information from the United Nations Fact-Finding Mission on Myanmar as well as "efforts to reconstitute networks of Coordinated Inauthentic Behavior that we previously removed, and content that violates our violence and incitement and coordinating harm policies, which we removed.”

The new ban implemented today will remain in effect indefinitely, though it doesn’t include "ministries and agencies engaged in the provision of essential public services,” the company said, citing the Ministry of Health and Sport and the Ministry of Education as remaining accessible on its platforms. – Bloomberg 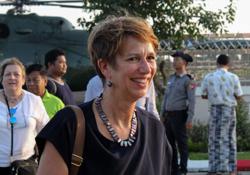