Deliveroo confirms deactivation of customer’s account over ‘wholly unacceptable’ delivery notes, while Foodpanda investigates similar incident. Equal Opportunities Commission says such requests for South Asian drivers not to deliver their food are within the law, but challenges the conduct. — SCMP

Hong Kong’s anti-racism watchdog has spoken out against customers requesting that their takeaway food not be delivered by South Asian drivers during the coronavirus pandemic, but will take no action since such conduct is not illegal.

Deliveroo on Jan 22 confirmed that a customer’s account had been deactivated over “inappropriate and wholly unacceptable delivery notes”, while rival company Foodpanda was investigating allegations of similar racist messages on its app.

“We believe in mutual respect between customers and riders; abusive behaviour is unacceptable,” Deliveroo said in a statement. “There is no place in our society for this deeply offensive behaviour.”

The Hong Kong Equal Opportunities Commission issued a statement saying while it was not illegal for customers to reject service providers of a specific ethnicity under the Race Discrimination Ordinance, such conduct was “undesirable if the customers did it in the absence of reasonable grounds”.

The watchdog reminded the public that it would be unfair to demonise an entire community based on some members being caught up in a Covid-19 outbreak, and the ordinance had clauses protecting service providers from racial harassment.

“We should be reminded that those infected are only a minority and it would be wrong and even dangerously misleading to generalise,” a spokesman added.

A screenshot of one delivery note he posted online read: “Can leave at door after ringing the bell, no Indian/Pakistan rider please.” 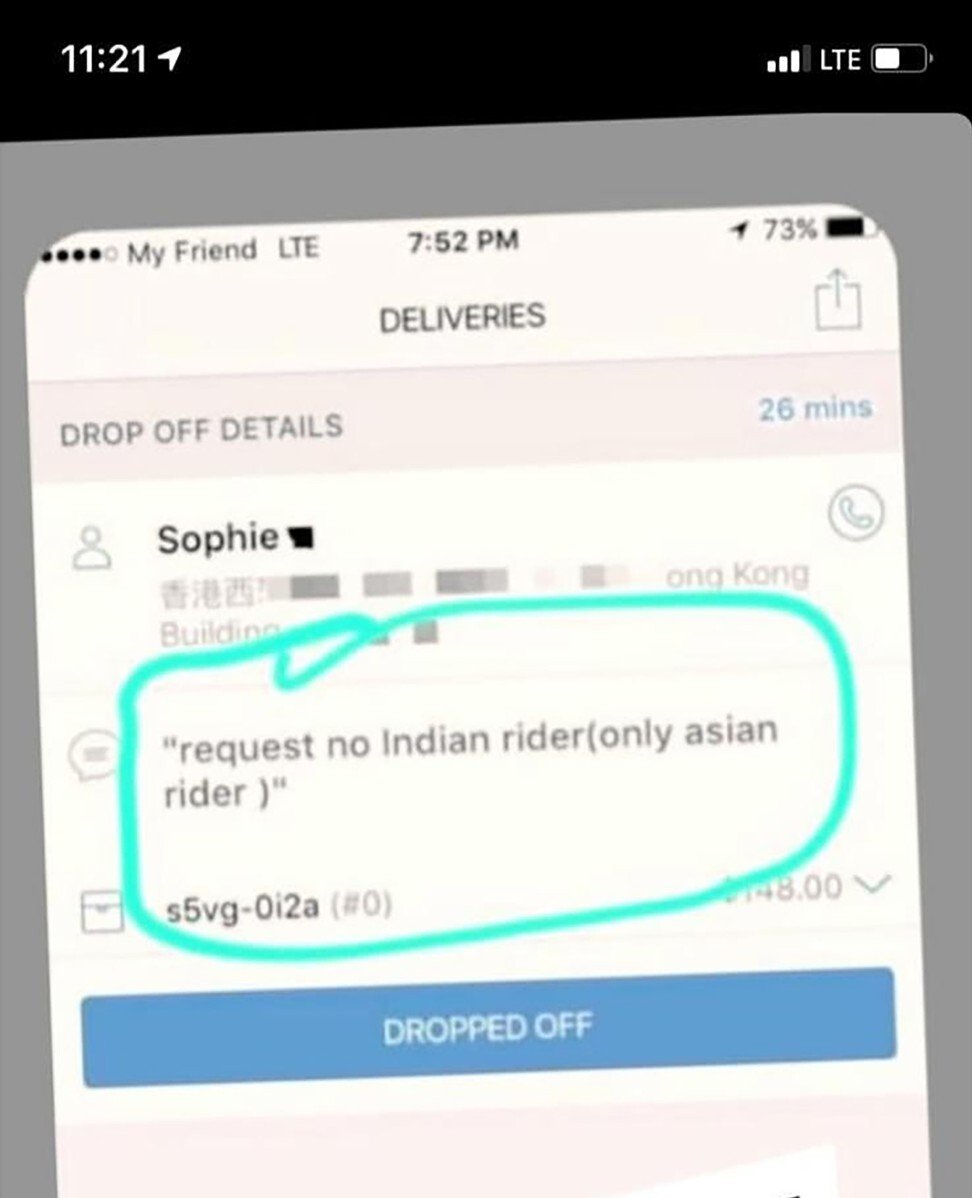 Chan said it was a blow to the delivery riders’ morale and also hurt their job opportunities.

Foodpanda said it would immediately investigate and take necessary action.

The company also urged its couriers to tell the management whenever they experienced any form of unfair or discriminatory behaviour while fulfilling orders, and pledged to support them.

“Race has absolutely nothing to do with one’s risk of being infected or one’s ability in delivering orders in a professional manner,” he said.

He acknowledged Deliveroo’s swift response and called on other companies to apply similar levels of sensitivity in protecting staff from ethnic minority communities.

A Centre for Health Protection official sparked similar outrage this week when he suggested the “behaviour” of South Asian residents in Yau Tsim Mong district was contributing to the spread of the disease.

Chief Executive Carrie Lam Cheng Yuet-ngor sought to reassure members of ethnic minority groups caught up in the outbreak that they had not been targeted based on race and ethnic background. – South China Morning Post