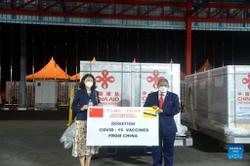 The hospital said the project has passed ethical reviews and that it will recruit adults with depression as patients for further studies. BCI technology has come under the spotlight in recent years thanks to advancements in neurotechnology. — SCMP

In a sign that China is making progress in brain-computer interface technology, a public hospital in Shanghai has begun neuromodulation treatment for depressed patients by using electrode chips implanted in their brains, according to Chinese media reports.

Neuromodulation is the use of medical devices to enhance or suppress nervous system activity by delivering electrical or pharmaceutical stimulation directly to the target area.

The hospital said the project has passed ethical reviews and it will recruit adults with depression as patients in further studies, although it was unclear how many patients will be involved.

BCI technology has come under the spotlight in recent years thanks to advancements in neurotechnology. It promises a future where the human brain and external devices can communicate with one another.

“We will implant chips into patients’ brains via a minimally invasive surgery. An electric stimulation will then be activated on the brain after we conduct an AI-based analysis,” Sun Bomin, the hospital’s director of functional neurosurgery, was quoted as saying by state media Shanghai Morning Post. Sun said this form of treatment is aimed at helping patients with depression who have shown resistance to traditional treatments.

However, electrode implantation therapy has been tried by Ruijing Hospital before this announcement. The hospital told state media thepaper.cn that it carried out the treatment on a 45-year-old man surnamed Pan in 2017 after other forms of treatment failed. Pan’s depression symptoms have been alleviated after three years of regular treatment, according to the hospital.

Ruijin Hospital did not immediately respond to questions sent by the South China Morning Post.

According to Chinese media Yicai, Ruijin Hospital’s current BCI treatment primarily relies on implanting a deep brain stimulation (DBS) device. The use of DBS devices is not new, however. The US Food and Drug Administration approved their use in 1997 for the neurological disorder tremor and in 2002 for Parkinson’s disease.

Neurotechnology is gradually moving into the mass market. The hype was accelerated after US tech mogul Elon Musk revealed that he has been working on BCI technology with his new company Neuralink. Musk said the future for mankind will be one in which human brains are connected with AI-powered machines.

Sun at Ruijin Hospital said China has a lot of catching up to do. “Compared with the US and other European countries, research on BCI technology in China is just starting,” he said.

Meanwhile, Shanghai is positioning itself as a hub for the technology. In October, Chinese video game tycoon and tech investor Chen Tianqiao set up the Brain Frontier Lab within the non-profit TianQiao and Chrissy Chen Institute (TCCI), established by Chen and his wife in 2016 to support study of the human brain.

The lab, located at Huashan Hospital, is currently studying brain signals of rats to devise future neural treatments for humans.

TCCI’s technology is more similar to that of Neuralink than the work being done at Ruijin Hospital, according to Yicai. The TCCI project, aimed at helping patients with cerebral palsy, is expected to apply for approval to conduct human trials next year.

Sun told Chinese media that the current use case for Ruijin Hospital’s BCI technology lies in the treatment of mental illnesses, including depression. He said BCI shows promise because the efficacy of traditional drugs on the brain was limited because they are distributed throughout the body.

Traditional treatments, including the use of antidepressants and cognitive therapies, have proven to be ineffective for some 20% of depressed patients who are resistant to drugs, Ruijin Hospital said. Citing World Health Organisation data showing there are 350 million people worldwide suffering from depression, the hospital said BCI technology may be able to help a significant number of patients. – South China Morning Post