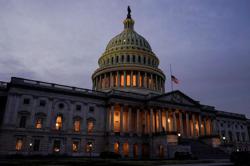 US Speaker of the House of Representatives Nancy Pelosi stands next to a sign showing a tally of 2020 US election votes as she speaks during her weekly news conference at the US Capitol in Washington DC, United States, Nov 20. — Reuters

US lawmakers used a mobile phone app over the last two weeks to remotely cast votes for the first time, according to technologists and some involved in the process, embracing technology to facilitate an internal party leadership contest.

The development marks a shift in how Congress is adapting to the Internet, especially in the midst of a pandemic. Use of the app, named Markup ERVS, had not been publicly disclosed before Dec 4.

A total of 230 House of Representatives Democrats logged into Markup on their government-provided iPhones to cast votes stating their preference for House speaker, who will be elected by the full chamber early next month, said Markup spokesperson Colby Redmond.

The House Democrats also chose their caucus chair and committee heads through the app, which transfers data to staff in Washington DC.

Earlier this year, the House changed its procedures for voting on legislation by the full chamber. It did so by allowing members to, for the first time, communicate their votes to colleagues in Washington DC who then cast those votes for them in person.

So far, only Democrats have adopted the technology. Republicans have voiced concerns about virtual voting, saying it sets a bad precedent.

The use of Markup for party leadership races illustrates an early but limited scenario, where a small number of devices and ballots decided the result within a closed system, said Redmond.

Markups' development was accelerated in March by the coronavirus. The virus continues to impact lawmakers’ ability to travel to Washington DC to cast votes and meet with colleagues, making the app’s launch timely.

While the concept of Internet-based mobile phone voting has been discussed in the civic technology industry for several years, cybersecurity experts have generally warned against its widespread deployment due to the possibility of cyberattacks.

As a sign of the app’s security, Redmond said, Markup ERVS, a product of Washington, DC-based government tech startup Markup LLC, was built in partnership with Microsoft.

Markup borrows code from Microsoft’s Election Guard technology, said Redmond, which offers “a way of checking election results are accurate, and that votes have not been altered" Microsoft’s website states.

The votes themselves are also encrypted in transit, Redmond said. – Reuters 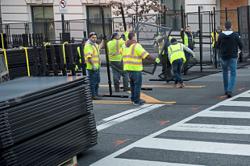