Both former CISA directors sought to provide clarity this week on the events that led to the recent and abrupt departures, which included Trump’s firing of Krebs. — AP

The recent departure of a spate of high-profile US cybersecurity officials resulted from their insistence that the presidential election was legitimate while President Donald Trump’s campaign peddled false claims of widespread fraud, according to one of the officials who was forced out.

Matt Travis, who was formerly deputy director of the Cybersecurity and Infrastructure Security Agency, said his agency, known as CISA, had intended to try to educate US voters about the electoral process and to “swat” down the types of disinformation spread by Russia ahead of the 2016 presidential election, including the use of fake online personas and false narratives.

That effort included a new “Rumour Control” website that was inspired by a similar effort by the Federal Emergency Management Agency to counter rumours related to hurricane season, according to Travis.

However, when Trump’s re-election campaign began to spread unproven allegations about the integrity of the vote, CISA officials, including then Director Christopher Krebs, sought to assure voters that the process was legitimate. “We were on a regular basis seeing disinformation and claims of improprieties or other things associated with the voting process on the security side,” Krebs said at an event Wednesday hosted by the Washington Post.

Both former directors sought to provide clarity this week on the events that led to the recent and abrupt departures, which included Trump’s firing of Krebs. Some members of Congress accused Trump of retaliating against Krebs for doing his job. On Monday, Attorney General William Barr told the Associated Press that the Justice Department hadn’t uncovered significant voter fraud that would change the outcome of the election, dealing Trump’s claims of a rigged election a further blow.

“We took the stance that it wasn’t our role to fact check the candidates, that we were going to stay out of that political process,” Travis said at an Aspen Institute event Tuesday. “But once the election had been conducted, and the electoral process of canvassing – and of counting and of certifying – was in place, then we felt it was our role to be articulating the ground truth about what these processes entailed and what security protections had been built into these systems.”

On Nov 10, days after the election was called for Democratic challenger Joe Biden, Politico ran a story pointing out that the disinformation that CISA was correcting included rumours promoted by members of Trump’s campaign. That night, Travis said he texted Krebs, “If this doesn’t get you fired, nothing will.”

But Krebs’s job appeared safe at first. The following day, on Nov 11, White House officials notified CISA that they would be asking for the resignation of Bryan Ware, who worked on election security as the assistant director of cybersecurity at CISA and whose resignation ultimately took effect two days later, according to Travis.

At the same time, news broke that Valerie Boyd, the assistant secretary for international affairs at the Department of Homeland Security, which oversees CISA, had also left.

Ware’s departure generated additional news coverage, adding to concerns within the agency about further repercussions. “We knew that each article calling attention to CISA and specifically our Rumor Control website may be continued difficulty in navigating a narrow path,” Travis said.

The following week, on the night of Tuesday, Nov 17, Trump used his Twitter feed to fire Krebs. Travis said his former boss learned that he had been fired scrolling through Twitter. In a phone call that evening, Travis said he offered to resign as well, but Krebs urged him to continue since he was next in line to run CISA.

The animus between Trump’s team and the former CISA officials didn’t end there. Trump attorney Joe diGenova on Monday called for violence against Krebs in remarks on “The Howie Carr Show” that he later said were a joke. “Anybody who thinks the election went well, like that idiot Krebs who used to be the head of cybersecurity. That guy is a class A moron. He should be drawn and quartered. Taken out at dawn and shot,” he said.

Krebs, speaking in an appearance on NBC Tuesday, said that diGenova’s language was “dangerous” and that he was exploring options with his lawyers. “I’m not going to give them the benefit of knowing how I’m reacting to this. They can know that there are things coming, though.”

Later, speaking at the Wednesday event, Krebs said he along with a number of state and local election officials had received death threats. “There really aren’t good words to describe how un-American and undemocratic it is that the actual individuals that are responsible for the process of this most sacred democratic institution of elections are the ones who are getting the blowback,” he said. “It has to stop. We have to let the professionals do their jobs.”

Krebs said on NBC that despite the turmoil that followed, he was confident in CISA’s work protecting the election. “When you enter federal service you pledge and oath to uphold and defend the constitution from foreign and domestic, country over party,” he said. “That’s what we did. We approached it in a non-partisan way, and we did it right.” – Bloomberg L.P. 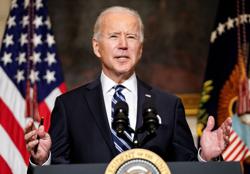