An autonomous hybrid Chrysler Pacifica minivan. What is preventing more widespread adoption of self-driving vehicles? The common answer is that the technology still faces large challenges and that people are reluctant to ride in cars without drivers. Indeed, the technology has not improved as fast as some had hoped, and many tests that require two people to be in a vehicle are being further delayed in the pandemic. — Detroit Free Press/TNS

Imagine how different the discussion about returning to the office or school would be if we could deploy autonomous vehicles – and therefore had more alternatives to public transportation or school buses without worrying about parking – or how much more secure our supply chains would be with broader use of autonomous trucks – which don’t expose drivers to health risks. Autonomous vehicles aren’t available to help people stay safe during the Covid-19 crisis, but they may be a key tool in future pandemics.

The biggest impediment to the use of these vehicles will not be technology, Clifford Winston and Quentin Karpilow argue in their new book, Autonomous Vehicles. Instead the problem is that the US federal government’s failure to address the myriad policy questions involved means we continue to have disparate state rules – and an enormous missed opportunity.

As if to prove this book’s point, the House of Representatives passed a massive infrastructure bill in July that included almost nothing on autonomous vehicles. That legislation is likely dead on arrival in the Senate; it’s hard to signal a priority lower than not being included in a Christmas tree bill with poor prospects.

Winston, a senior fellow in economic studies at Brookings, and Karpilow, a former Brookings research assistant, carefully estimate the potential economic impact of moving toward autonomous vehicles. The biggest economic benefits include less congestion in commuting and fewer collision deaths; other substantial benefits include lower pollution. The National Highway Traffic Safety Administration has estimated that, in 2010 alone, the economic costs from accidents amounted to almost US$250bil (RM1.05tril), and that the social costs from accidents (including the pain and suffering and loss of life among the four million people involved) amounted to more than US$800bil (RM3.37tril).

Self-driving vehicles would cut highway congestion in half, and would virtually eliminate the estimated 94% of crashes that are caused by human error. And the avoided costs of delays would boost the economy. If California had universal self-driving vehicles in 2010, Winston and Karpilow estimate, the state economy would have been US$35bil (RM147.75bil) larger – and would have netted 350,000 more jobs. Extrapolating those results to the US as a whole, economic growth would be at least a percentage point a year higher with autonomous vehicles.

These are big effects. So what is preventing more widespread adoption of self-driving vehicles?

The common answer is that the technology still faces large challenges and that people are reluctant to ride in cars without drivers. Indeed, the technology has not improved as fast as some had hoped, and many tests that require two people to be in a vehicle are being further delayed in the pandemic.

Winston and Karpilow acknowledge certain ongoing technology issues – including the way in which AVs’ LIDAR (light detection and ranging) systems handle white-out conditions, predict when a pedestrian is distracted, and detect black cars. There are also real concerns about the potential for the vehicles’ operating systems to be hacked. But with about 1,500 self-driving cars, trucks and other vehicles being tested, the authors are confident that the technology is evolving fast enough that it will not be the binding constraint to widespread adoption. And as the technology evolves, fears about potential harms from the vehicles will likely subside. (For disclosure, Lazard advises companies working in this space.)

“The major obstacles to realising most of the potential benefits are primarily policy related, rather than technological,” Winston and Karpilow write. “The federal government has already delayed vehicle testing and adoption, and it seems unable to understand that current inefficiencies in highway policy pose a serious threat to the success of autonomous vehicles.”

What needs to happen? Federal policy makers have so far neglected to create uniform rules for testing and adopting autonomous vehicles. They also need to help create the necessary connectedness infrastructure nationwide (so that cars can communicate with one another and with other objects). Some of this will require new legislation, but not all of it. The government remains relatively passive even about writing regulations. (Some policy problems are intractable, such as the philosophical dilemma of how one would program an autonomous vehicle to handle the famous trolley problem, but their practical impact is limited.)

This is a controversial hypothesis: most observers believe technology challenges remain the key problem in getting self-driving cars on the road. One way to find out whether Winston and Karpilow are right is for the federal government to continue on its current path of deferring to a patchwork of state rules and see what happens. The technology will spread throughout the world in varying national policy environments. The Chinese government is rapidly embracing it, including by building a highway from Beijing to Heibei Province with special lanes for self-driving vehicles. Time will tell whether the core constraint on autonomous vehicles in the US is technology or coordinated policy. But that is not a smart way to find out. – Bloomberg

(Peter R. Orszag is a Bloomberg Opinion columnist. He is the chief executive officer of financial advisory at Lazard. He was director of the Office of Management and Budget from 2009 to 2010, and director of the Congressional Budget Office from 2007 to 2008.) 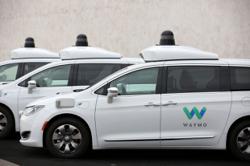