Shopify, BlackBerry team on app with Canada at Covid milestone

Canada's Prime Minister Justin Trudeau during a news conference in Ottawa, Ontario, Canada, on June 9. Recently he said that users will be able to upload their test results voluntarily onto a contact tracing app currently being developed with Shopify Inc and Blackberry Ltd. All data will be kept anonymous, with no no location or personal information collected. — Bloomberg

Canada is partnering with Shopify Inc volunteers and BlackBerry Ltd on a contact tracing application for Covid-19 as cases in the country breached 100,000.

Prime Minister Justin Trudeau said users will be able to upload their test results voluntarily onto the app. All data will be kept anonymous, with no no location or personal information collected.

"It is an extra tool that helps people move forward with confidence that we’re going to be able to track and trace more of the exposure, or the potential sharing of Covid-19 virus, around the country,” said Trudeau who announced the partnership with the Canadian technology firms at a briefing outside his Ottawa residence on June 18.

He added said any usage would be helpful but results would be "extraordinarily useful” if 50% of Canadians signed up.

The push for contact tracing comes as the pandemic reached a milestone in Canada: more than 100,000 cases. While the rate of new infections has been receding – new cases in Ontario have been under 200 for five straight days – the country now has about 8,255 deaths.

Shopify, which sells e-commerce software to businesses, said the app is "not a Shopify initiative” but is being developed by a group of volunteers from the company. "The national app will be owned and operated by the government of Canada in cooperation with the provinces and territories,” said Sheryl So, a company spokeswoman.

BlackBerry will be providing our security and privacy expertise to review the app.

Countries around the world have struggled to implement virus-tracking apps due to restrictions on data collection built into built into smartphones by Apple Inc and Google. Norway halted development of its app this week due to privacy concerns, while the UK’s rollout has been mired in bureaucracy.

The COVID Alert app will be available in Ontario in the next two weeks, said Premier Doug Ford, urging the public to sign up.

"If we don’t have the cooperation of people of Ontario, we put ourselves more at risk,” Ford said in Toronto. He added privacy was the number one priority and Shopify and BlackBerry "nailed it”.

Users will notified if they have been exposed to someone who has tested positive for Covid-19 in the last 14 days, Ford said. The app will also provide users with quick access to public-health advice and resources, and recommend any necessary actions, such as monitoring for symptoms, self-isolation or appropriate next steps on getting tested.

Canada’s app will use Bluetooth technology to send out encrypted, anonymised codes to other nearby phones that have the app, Ford said.

About 97% of new Covid-19 cases are currently being reached by local public health officials within one day, Ford added. Statistics Canada will also provide as many as 1,700 staff to help in contact tracing across the country. – Bloomberg 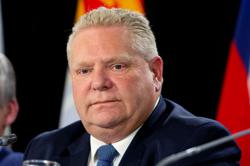