A cellphone tower, used for a 5G network, on a street in Beijing, China. Bolivia's communications ministry issued a statement reminding its citizens that 5G technology is not available in the country and that it is not linked to the respiratory illness. — AFP

The South American country does not yet have 5G wireless infrastructure, which has been linked to the pandemic in viral posts on social media.

According to the conspiracy theory, electromagnetic radiation causes the symptoms of Covid-19, not a virus – an idea debunked by scientists.

Four communications towers were destroyed in Yapacani, near the city of Santa Cruz, local police chief Franklin Villazon was cited as saying by the newspaper El Deber.

"We were overwhelmed," said Villazon, likening the incident to a "terrorist attack". No serious violence was reported by police.

The villagers had previously held protests demanding the mayor take down the masts over fears that they could spread Covid-19, according to the newspaper.

Bolivia's communications ministry issued a statement reminding people that 5G technology is not available in the country and that it is not linked to the respiratory illness.

Similar attacks on communications towers have been seen elsewhere, including in Britain.

A man was jailed last week in northwest England for setting fire to a 5G mast following fears the technology was dangerous and spreading the coronavirus. 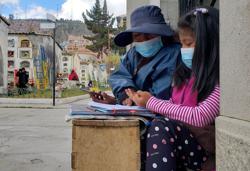 China alarmed as binge drink livestreaming where people drink until they vomit or pass out becomes the latest online trend
Tencent merges video platforms to sharpen competition with TikTok owner ByteDance
Chip shortage weighs on car sector recovery - Volkswagen CEO
Google Assistant can now answer your questions on the Oscars, and more
Coinbase jumps 11% day after Nasdaq debut
Canal+ Polska revives Warsaw listing ambitions amid IPO boom
JD.com, Meituan and ByteDance among the first to pledge antitrust compliance after being told by Beijing to learn a lesson from Alibaba
Kindergarten teacher sacked for posting pictures of young boy forced to smell his feet
Deliveroo CEO: 'We have a lot of work ahead to prove ourselves to the markets'
Cathie Wood's Ark funds bought $246 million Coinbase shares