Gamers may have a cure for distressed American shopping malls

People playing a video game during a Full Sail University event to show off their new esports arena, the Fortress, on March 5, 2019. The Covid-19 crisis has shut down eSports facilities across the country. But in recent years, before the onset of the pandemic, arenas were starting to pop up in unlikely locations — on college campuses and as standalone venues their owners are calling stadiums in places like Arlington, Texas. Nowhere has the trend elicited more excitement than at American shopping malls. — Orlando Sentinel/TNS

It was last summer, during Charming Charlie’s second bankruptcy, that the women’s-accessories chain closed its store in the Mall of Georgia, a sprawling brick-and-glass behemoth on the far outskirts of Atlanta. Like so many merchants in the era of free delivery, Charming Charlie was eaten away by mall rot — customers abandoning shopping centers to spend their money online.

Several months later, in January, the mall’s owner announced that the vacant space would be redeveloped into something largely unheard of in consumer retail.

The Mall of Georgia was getting its first eSports arena.

Allied Esports announced plans to move into the former Charming Charlie space to host video game competitions, amateur and professional. The 13,000 square feet (1,200 square meters) will someday feature dozens of personal computers and video game consoles where competitors, individually or in teams, can square off for prizes and bragging rights in games like Fortnite, Mario Kart and League of Legends. For the semi-dazed parents and grandparents who get to watch from the sidelines, there will be plenty of comfortable seating and — this is key — booze.

“You’ll be able to come in and play socially, compete or hang back and watch the other players,” said Jud Hannigan, Allied Esports’ chief executive officer. “There will be a lot of options, surrounded by a pretty extraordinary food and beverage offering.”

The Covid-19 crisis has shut down eSports facilities across the country. But in recent years, before the onset of the pandemic, arenas were starting to pop up in unlikely locations — on college campuses and as standalone venues their owners are calling stadiums in places like Arlington, Texas. Nowhere has the trend elicited more excitement than at American shopping malls.

With store vacancies at an eight-year high — and malls from coast to coast shuttered due to fear of customers spreading deadly Covid-19 — retail landlords see the potential of gamers someday pouring out of their basements and into their shopping meccas as a kind of lifeline. Not only have mall owners welcomed arenas in Florida, Mississippi and Montana, but they’re putting their money in, too. In January, Allied Esports announced a US$5mil (RM21.85mil) investment from Brookfield Property Partners, a global real-estate company that owns numerous malls. Simon Property Group, which owns the Mall of Georgia, is also an investor.

“You want some place where the parents will go, know that their kids are safe and feel comfortable staying and having a glass of wine.”

It’s a marriage built on mutual need. For the struggling retail industry, the rising popularity of esports in America looks like an opportunity to create a new vortex of teenage activity, reminiscent of the video-game arcades of old, that can lure packs of young people back into the mall and then spin them out to the surrounding food courts and clothing stores.

For the fledgling American eSports industry, a prime spot at the mall can offer an accessible, well-trafficked space for competitors to gather in person. It can also provide a measure of mainstream validation — a hard-earned place in the fabric of American life alongside the multiplex and the Cheesecake Factory.

“There’s a tremendous demand for this,” Hannigan said in an interview in mid-March.

To determine which malls might someday get the next round of new facilities, Allied Esports said it’s poring over data ranging from Facebook trends to Google analytics to video-game downloads on gaming site Steam.

Unlike recreational gaming, professional esports competitions require that all players use identical equipment so that no one has an unfair advantage. It’s a level playing field that has to be built and maintained. The challenge of constructing a national esports infrastructure is being tackled by a handful of companies working in tandem with major stakeholders in the retail industry.

“Gaming is the stickiest entertainment we know,” said John Fazio, the founder and CEO of Nerd Street Gamers, an esports company backed, in part, by Comcast Corp. “A movie theater keeps you for two hours. A gaming tournament keeps you there for 16 hours over three days.”

Nerd Street Gamers operates a handful of regional esports venues under the brand name Localhost in Philadelphia, Denver, and Huntington Beach, California. Last year, the company announced that Five Below, a national chain of 900 discount stores catering to tweens and teenagers, had become a strategic investor. Nerd Street Gamers is eventually planning to build a series of Localhost gaming salons next door to Five Below outlets. Inside the 3,000- to 6,000-square-foot centers, the companies will host a variety of events, including video-game tournaments, training sessions and boot camps. During breaks, players can stroll over to Five Below and do some shopping. “We call it social retail,” Fazio said.

For parents who may be wary of encouraging their offspring to spend even more time in front of a screen, Fazio has a well-honed sales pitch. “There’s an analogy I use all the time,” he said. “Imagine your kid is great at basketball but all he does is play pickup ball outside and mess around with his friends. He’s not building himself a resume. He’s not learning the teamwork of playing 5-on-5 on a full court. He’s not going into a system that can give him an opportunity to go to college.”

By contrast, dropping your child off at Localhost, he said, can provide them with some much-needed structure. There will be adults to monitor their behaviour, coaches to improve their skills and peers to play with on teams. All the rampant toxicity of online gaming, Fazio said, goes away when you put a bunch of adolescent competitors together in a supervised setting.

Other retailers have been experimenting with similar setups. In the fall of 2018, Walmart Inc announced it was teaming up with Esports Arena to build several facilities inside the retailer’s megastores. “We couldn’t think of a better way to provide a quality gaming experience to Walmart shoppers,” Mario Pacini, a Walmart vice president, said at the time.

Jed Kaplan, the founder and CEO of Simplicity Esports & Gaming Co (and co-owner of the National Basketball Association’s Memphis Grizzlies) said that his company now has 45 gaming lounges in locations like the Edgewater Mall in Biloxi, Mississippi, and West Park Promenade in Billings, Montana. Five more are under construction. Most of the centers, he said, are run by local franchisees, many of whom come from the food industry. “I’ve spoken to a lot of Dunkin’ Donuts and Subway franchisees,” he said. “Recently, it’s shifted to mall owners. We’ve talked to people from private equity who have invested in distressed malls and are looking for an attraction.”

Simplicity also owns a number of professional eSports teams. Periodically, Simplicity has held promotional events where amateurs can play head-to-head against the pros. “That’s a huge draw for the mall,” Kaplan said.

According to Kaplan, before the pandemic, local elected officials were starting to offer support and incentives to lure esports centers into their community malls. “The local governments are looking at this as a way to revitalise something that at one time was the highlight of that town,” he said. “They look at it almost like building a new sports stadium.”

Nerd Street Gamers’ list of recent sponsors has included Kellogg Co, DreamSeats LLC, and Mike and Ike. At one Nerd Street event, gamers dumped a bucket of Mike and Ike candies over the head of a victorious eSports player, a nod to the Gatorade Shower. At the Allied Esports venue inside the Luxor resort in Las Vegas, the weekly Mario Kart competitions have been sponsored by a local Volkswagen dealership. Anyone who signed up for a test drive was comped free game time.

It’s not just shopping malls owners who have been fueling the construction boom. Many institutions of higher education have added varsity eSports teams. As a result, various colleges have been looking to break ground on esports venues. “The school gets the naming rights,” Fazio said. “They get to use the facilities for their curriculum and for classroom usage. And they get a reserved space for their varsity team.”

Later this year, Rowan University is scheduled to open a Localhost on its campus in Glassboro, New Jersey. Joe Cardona, a vice president at the public school, said the new space will eventually be “the go-to collegiate eSports facility” in the region and a unique perk for students. The skills acquired in eSports, he said, are transferable to everything from graphic design to computer science to business development to streaming-media careers. “This is also going to help from a recruitment point of view,” Cardona said. “Kind of like a new football stadium.”

Periodically, American sports fans freak out that the country is falling behind the rest of the world in one form of competition or another (see, for example, the longstanding angst over America’s slump in men’s tennis). At the moment, many of the top esports competitors hail from Asia or Europe. eSports boosters say that one way to improve the pipeline of local talent over the long term is for the US to improve its community esports facilities.

In recent years, Fazio said, competitive gaming in the US has favored kids from upper middle-class backgrounds — the small subset of families whose parents can afford to shell out thousands of dollars every year for top-of-the line gaming equipment. Not so, he said, at venues run by Nerd Street Gamers. “Here, everybody competes on the same computer,” Fazio said. “We want esports to be accessible. That only comes with building more facilities.”

“You want some place where the parents will go, know that their kids are safe and feel comfortable staying and having a glass of wine,” said Kaplan of Simplicity Esports. “We’re creating a social environment.” — Bloomberg 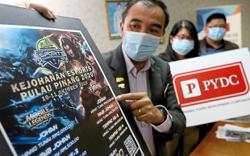 Fierce eSports battle on the cards