The Half-Life franchise has returned to push virtual reality gaming further into the mainstream.

Half-Life and Half-Life 2 showed that action games could tell stories and simulate real-world physics in an engaging, award-winning way.

It's been over a decade since 2007's Half-Life 2: Episode 2, whose conclusive third episode is considered lost to time, but Half-Life: Alyx has emerged to push VR to a legion of computer gamers and franchise fans.

In the meantime, developer and digital store owner Valve Corp has not only grown the Steam network into PC gaming's most enduring presences, but has become a VR headset designer and manufacturer.

Bundled with Valve Index systems, or even just headsets or controllers, regardless of purchase date, the March 23 release launched to a strong reviews consensus.

OpenCritic's averaging system delivers a 91, with Metacritic's aggregate producing a 92.

It's "a new bar for VR in interactivity, detail, and level design" (IGN), for example,"science-fiction with both feet on the ground [in which] the interaction, enlivened by VR, elevates everything" (Eurogamer), and it "takes many of the concepts we've seen evolve since VR's inception and distills them to their fundamentals... creating a VR experience that's a full, cohesive whole" (GameSpot).

Still, a more cautionary overview saw it as achieving "some astoundingly high heights while also managing to be both too ambitious and too conservative for its own good" (Kotaku).

Yet, considering the franchise's allure and the strong reception,"the only thing left is whether hardcore fans will be willing to buy, and use, a virtual reality headset in order to learn what happens next in the world of Half-Life" (Polygon).

So what does it take to play Half-Life: Alyx at release?

It's compatible with a broad range of headsets that support Valve's Steam VR protocols, but appears particularly well suited to the Valve Index system, which launched midway through 2019.

Nonetheless, the game is designed to work with not only the Valve Index, or the HTC Vive (Valve's first consumer-grade headset collaboration), but also Facebook's Oculus Rift and the Oculus Quest (via Link Cable), as well as Windows Mixed Reality systems, all of which meet SteamVR standards.

As a result, players need not spend the US$999 (RM4,426) necessary to obtain the full, high-end Valve Index, when stock supply is resolved.

A computer capable of running Half-Life: Alyx would cost around US$800 (RM3,545) from scratch, if self-assembled; a graphics card or CPU replacement from around US$150 (RM665), per minimum requirements. – AFP Relaxnews 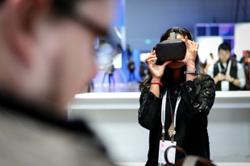