A woman watches what new products are for sale at the 4 Caminos market in Havana, Cuba. One year after the Cuban government authorised mobile data services, thousands of Cubans are now using social media messaging apps to find foodstuffs and supplies that have become scarce since the Trump administration hardened its economic sanctions against the island nation. — Photos: AP

HAVANA: "Where to find it?” and "Whatever you want” and "What do you need?”

These are the names of some of the social media groups catering to thousands of Cubans who are using newly available mobile Internet to grapple with shortages of basic goods that are worsening under tougher US sanctions.

Armed with Internet access on cellphones that came into general use last year, Cubans are forming online chat groups to share tips about where to find dish detergent, chicken, diesel fuel and other scarce essentials. They do so on WhatsApp, Instagram and Facebook.

Without the chat groups, people would have to "spend all day going around the city” looking for things that they need, said Claudia Santander, a graphic designer who administers a dozen WhatsApp groups at no charge.

Now, for example, someone can ask about a certain product – toilet paper or milk powder or soap – and another person on the chat might reply within minutes to say which store in Havana, the Cuban capital, is stocking it.

"I've been able to sort out” diaper and other purchases since joining several social media groups aimed at locating essential items, said Havana resident Laura Vela, who has a young child.

Some of the groups have waiting lists of people anxious to get the benefits of being a member. WhatsApp limits group chat sizes to 256 people, while other platforms accept thousands. 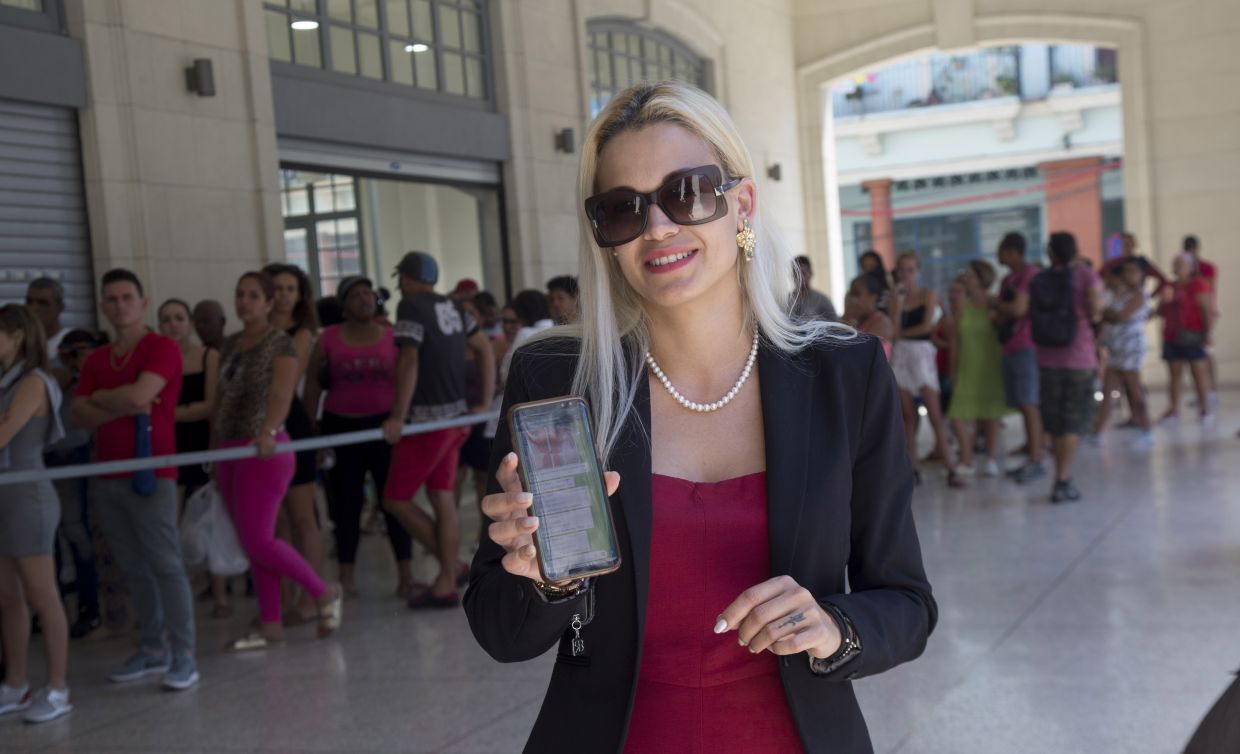 Claudia Santander, a 21-year-old graphic designer, posing with her mobile phone as others line up to buy goods at the 4 Caminos market in Havana, Cuba. Santander administers ten WhatsApp groups that help others search for goods and supplies in Cuba's markets and stores.

Shopping through social media is easing life for many on the island, but it may be exacerbating inequality and making things harder for those without Internet connections. Moreover, people get discounts on data if they pay with badly needed dollars through companies outside Cuba, meaning those without US currency are at a disadvantage.

"A lot of people can't afford” to buy phone data or a good phone, said Lucía March, a writer. For those who can, she said, "the usefulness is obvious and it's something that represents, above all, development and also helps open people's minds a little”.

Cuba doesn't have classified ads in official newspapers. Some businesses offer sales on the Internet, but the social media groups help people grapple almost in real time with constant challenges.

Cooking oil might vanish from shelves, but then it returns and there is no flour. One day there is no butter and the next there is no cheese. Many people, particularly those not getting information from a social media network, can spend hours fruitlessly searching for household items.

Cubans have been used to struggling for the basics since the collapse of their benefactors in the Soviet Union decades ago, but the situation deteriorated in 2019 after US President Donald Trump escalated sanctions. The economic woes of Venezuela, a key provider of oil to Cuba, has also hurt the Caribbean country.

As a result, there have often been long lines at shops as well as rationing of products. Many people then turned to social media to try to find what they need. 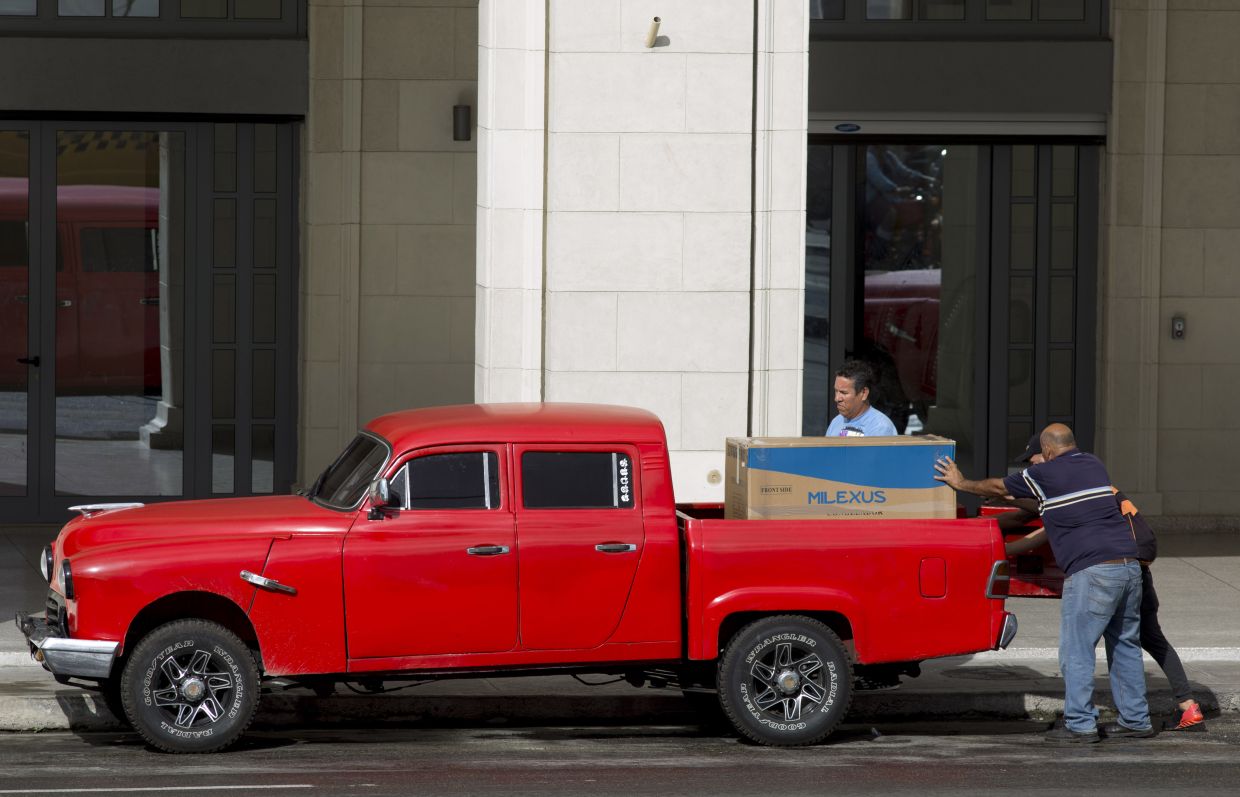 Men loading up a newly bought refrigerator onto a truck in Havana, Cuba. In recent months, Cuban authorities have started to promote websites that allow people to pay in US dollars through a credit card for items including flowers, meat, mattresses and air conditioners. Items like refrigerators are only available to be bought in dollars.

Cuba began to provide data for cellphones in December 2018, and now has more than three million lines in service.

It costs the equivalent of US$5 (RM21) for 400MB and US$20 (RM85) for 2.5GB, although more discounts have become available recently. Average monthly salaries are between US$20 (RM85) and US$50 (RM212), although many people receive remittances from relatives abroad.

In recent months, Cuban authorities have started to promote websites – www.compraspacuba.com is an example – that allow people to pay in dollars through Visa and Mastercard for items including flowers, meat, mattresses and air conditioners.

Although the use of such websites is not widespread, they could increase inequality between those with access to dollars and foreign credit cards, and those who don't, or don't have relatives living abroad who can help them out.

Some people have used the internet to campaign on issues such as the abuse of women, or to engage in unofficial journalism, drawing criticism from authorities in the one-party state who have warned against any anti-government activism.

Ted Henken, a Latin America expert at Baruch College, City University of New York, said many Cubans use social media for personal or non-political reasons. But he said the use of social media has broader implications for society because it is "much more free, social and spontaneous”. – AP