A sign welcomes motorists to Tierra del Mar, Oregon. The tiny coastal village is opposing a plan by Facebook to build a landing spot for a submarine cable connecting America with Asia. — Photos: AP

TIERRA DEL MAR, Oregon: A battle playing out in Oregon is pitting residents of a tiny coastal town with no stoplights or cellphone service against one of the world's biggest tech companies.

Locals in Tierra del Mar are trying to stop Facebook from using property in their quiet community to build a landing spot for an undersea cable connecting America with Asia.

Representatives of the social media giant say Tierra del Mar is one of the few places on the US West Coast suitable for the ultra-high-speed cable. It will link multiple US locations, including Facebook's huge data center in the central Oregon town of Prineville, with Japan and the Philippines, and will help meet an increasing demand for internet services worldwide, the company says.

But locals say vibrations from drilling to bring the submarine cable ashore in this village of some 200 houses might damage home foundations and septic systems. They also point out that Tierra del Mar, arrayed along a pristine beach, is zoned residential. If the project is allowed, they say, more commercial ventures will come calling.

"This is a huge precedent. Once you open the shores to these companies coming anywhere they want to, Oregon's coast is pretty much wide open season,” resident Patricia Rogers told county officials in written remarks. 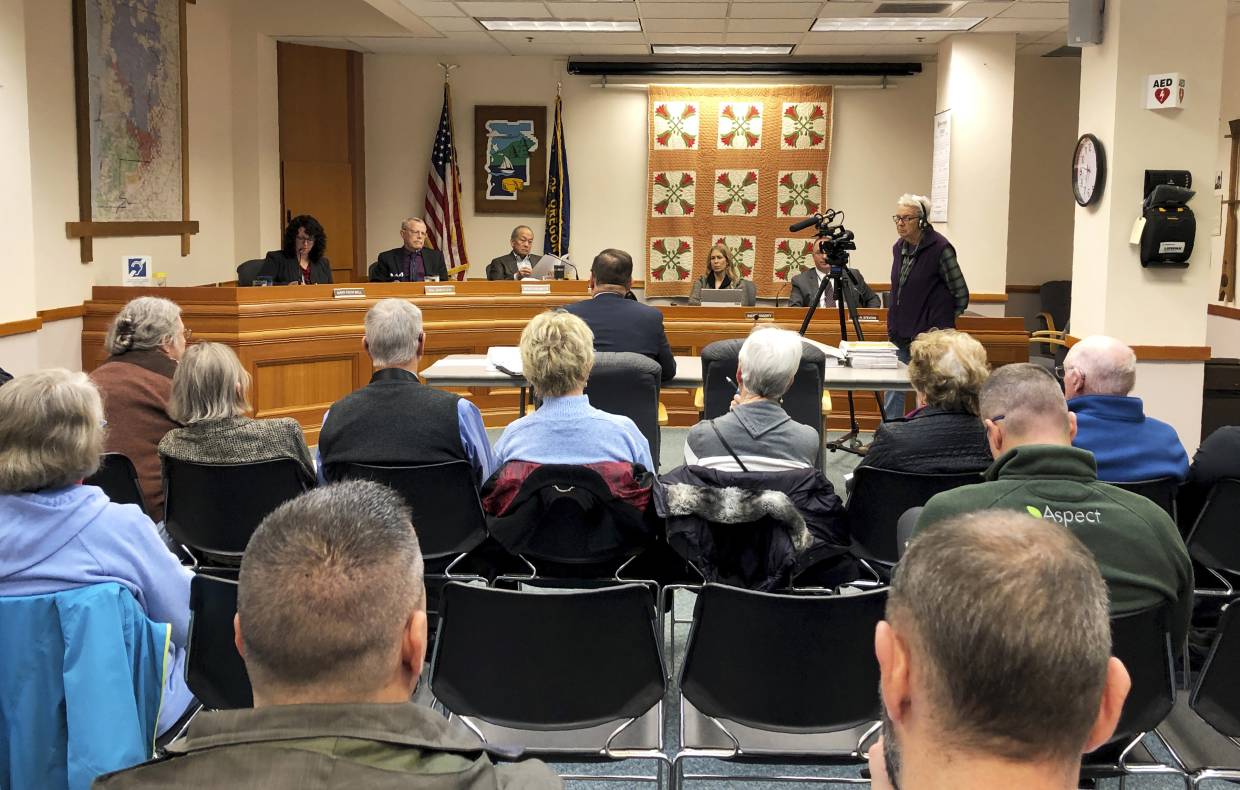 The three-member Tillamook County Board of Commissioners hearing final testimony on the application by tech giant Facebook over their seeking use of an oceanfront lot for the site of its proposed landing spot for a submarine fiber-optic cable in Tierra del Mar, Oregon. The Tillamook County Board of Commissioners voted 2-1 in favour of the project after hearing testimony Jan 9.

The Tillamook County Board of Commissioners voted 2-1 in favour of the project after hearing testimony Jan 9.

"Once it is done, it is my hope that the community is not going to even know it is there,” Commissioner David Yamamoto said. He noted the project is similar to other uses, like electrical facilities, that have been permitted.

Residents plan to appeal to a state board.

Tierra del Mar, 65 miles (105 kilometers) southwest of Portland, is home to a mix of professionals and retirees who share a love of the unspoiled beach that is fringed with coastal pines and the deer, bald eagles and rare seabirds that inhabit the area. It has two businesses, a rock shop and antiques store, and no cell service, apparently because providers don't consider it profitable enough. 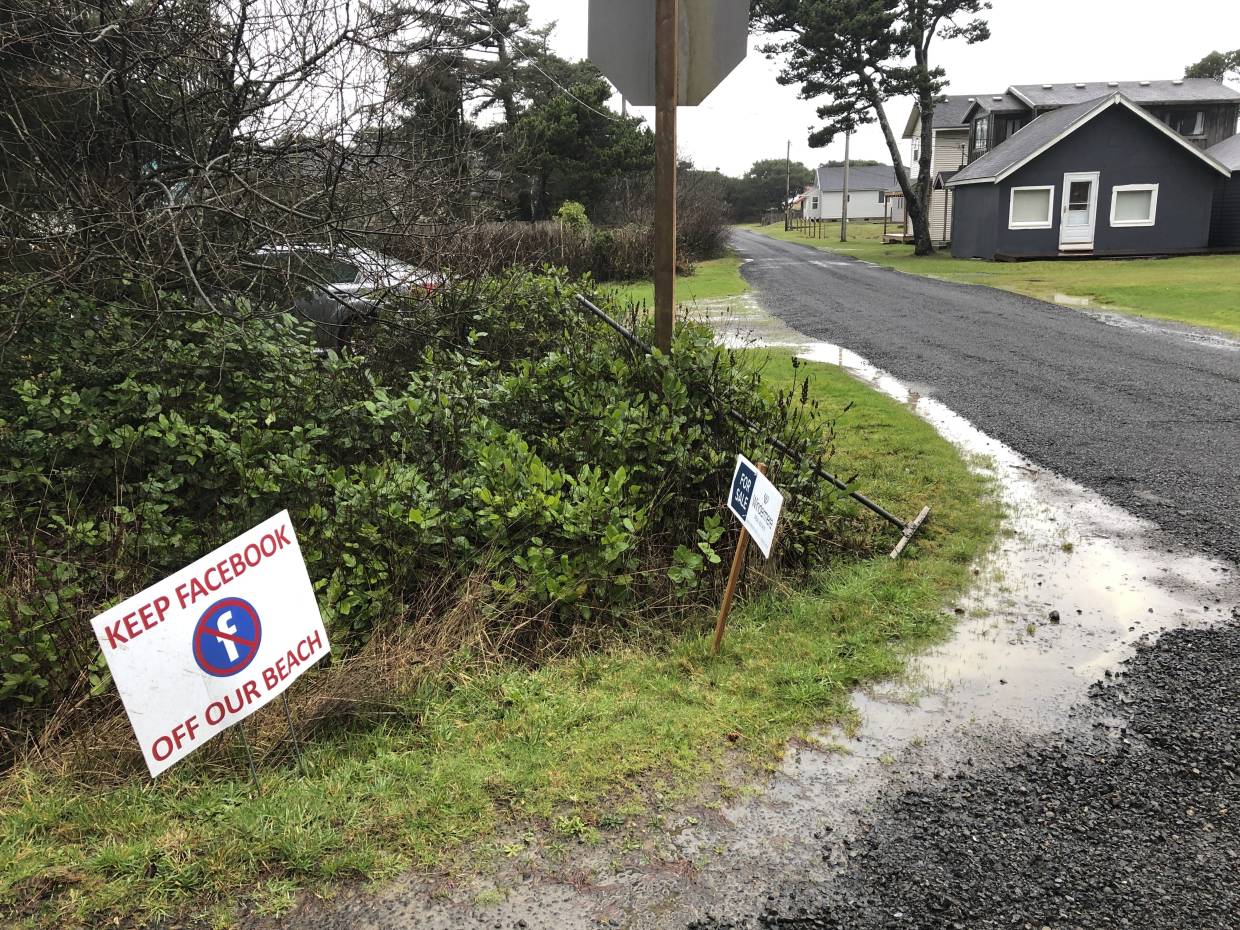 A sign expressing opposition to a plan by Facebook to build a landing spot for a submarine cable connecting America with Asia stands on property in the tiny community of Tierra del Mar, Oregon.

In recent years, locals fiercely opposed a plan by investors to turn a former farm just to the north into a high-end golf course. The site ultimately opened instead as a state nature area.

Residents' attention turned to Facebook in 2018 when a subsidiary bought the empty lot for the cable landing from former NFL and University of Oregon quarterback Joey Harrington. County records show Edge Cable Holdings, USA, paid him US$495,000 (RM2.01mil) for the beachfront property, about the size of 10 tennis courts.

Rogers, who owns a house adjacent to the Facebook lot, stood on the beach in stormy weather Wednesday as waves charged the shore. A sign apparently toppled by the high tide said "Keep Facebook off our beach”.

She pointed to two other empty lots nearby.

"If Facebook gets (approval), well, two companies will get those, and we'll have three of these drilling projects within a half a mile of each other,” Rogers said.

Others feel the tech titan is trying to steamroller residents' wishes.

"I am extremely angry about and opposed to the cavalier attitude that an amoral multi-national, multi-billion dollar corporation has taken to this tiny residentially zoned portion of Tillamook County,” resident Carol J. Griffith said in written comments. 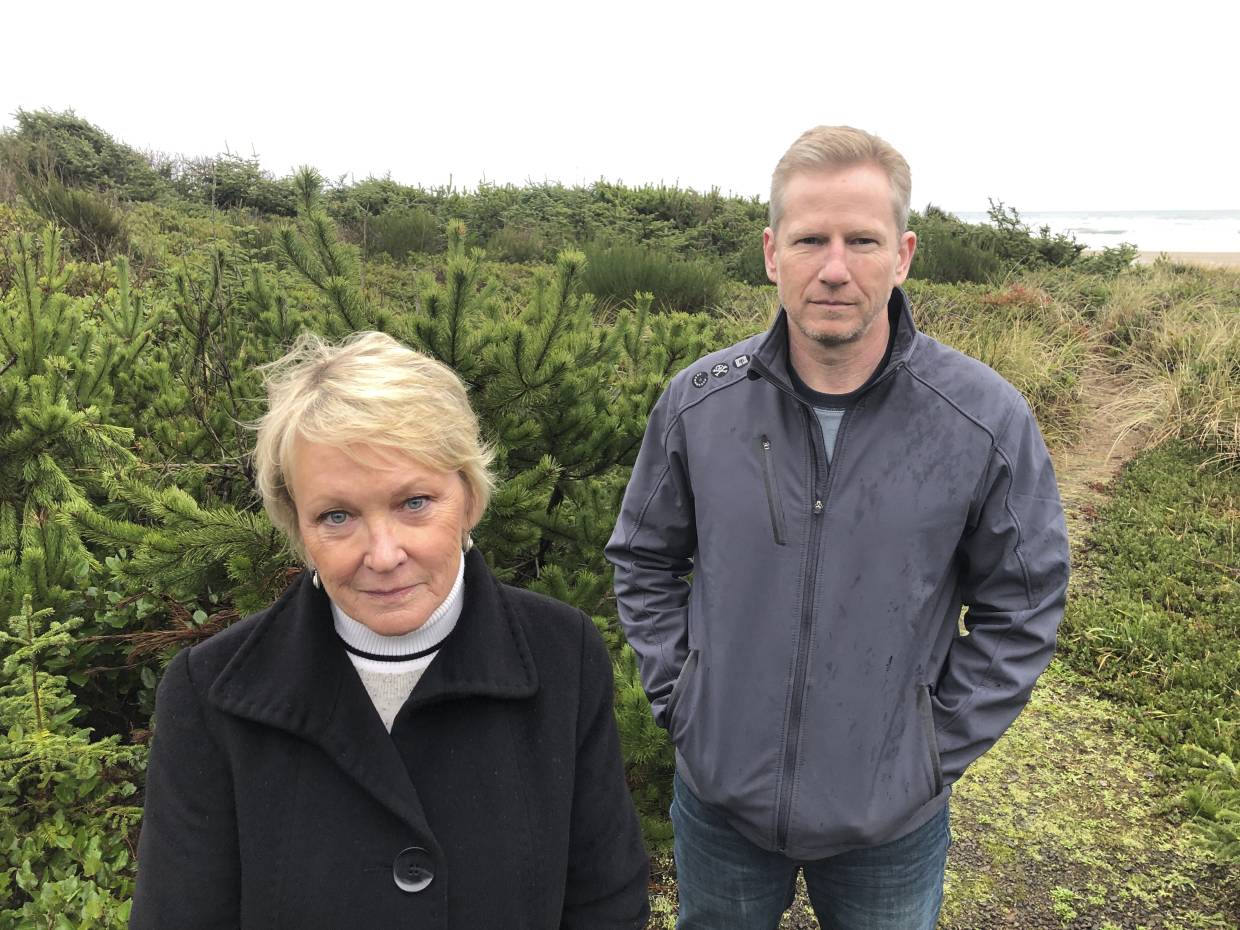 Rogers (left) and Jeff Bryner, who each have houses next to a lot (which is behind them) that a Facebook subsidiary bought for a landing site for a trans-Pacific fibre optic cable.

Facebook representatives told county officials the horizontal directional drilling will last about a month, and all that will remain is a manhole cover. They said they carefully chose the Tierra del Mar site, avoiding areas where fishermen trawl and keeping to places that allow burial of the cable so nets won't snag on it. They also had to skirt undersea canyons and federally protected fish habitat.

The company declined to provide other details about the project but told The Associated Press in a statement: "With more people using the Internet, existing Internet infrastructure is struggling to handle all the traffic. These new cable projects help people connect more efficiently.”

Internet use by the world's population has reached 4.1 billion people, or 54% of the global population, up from 1.6 billion people in 2008, according to the International Telecommunication Union, a United Nations agency.

Almost all of that messaging and Internet browsing goes through fiber optic cables, not satellites in the heavens, said Kristian Nielsen, vice-president of Submarine Telecoms Forum, a Virginia-based trade magazine.

When data, including phone calls, goes intercontinental, say between North America, Europe and Asia, undersea fiber optic cables are used 99% of the time, Nielsen said in a telephone interview. 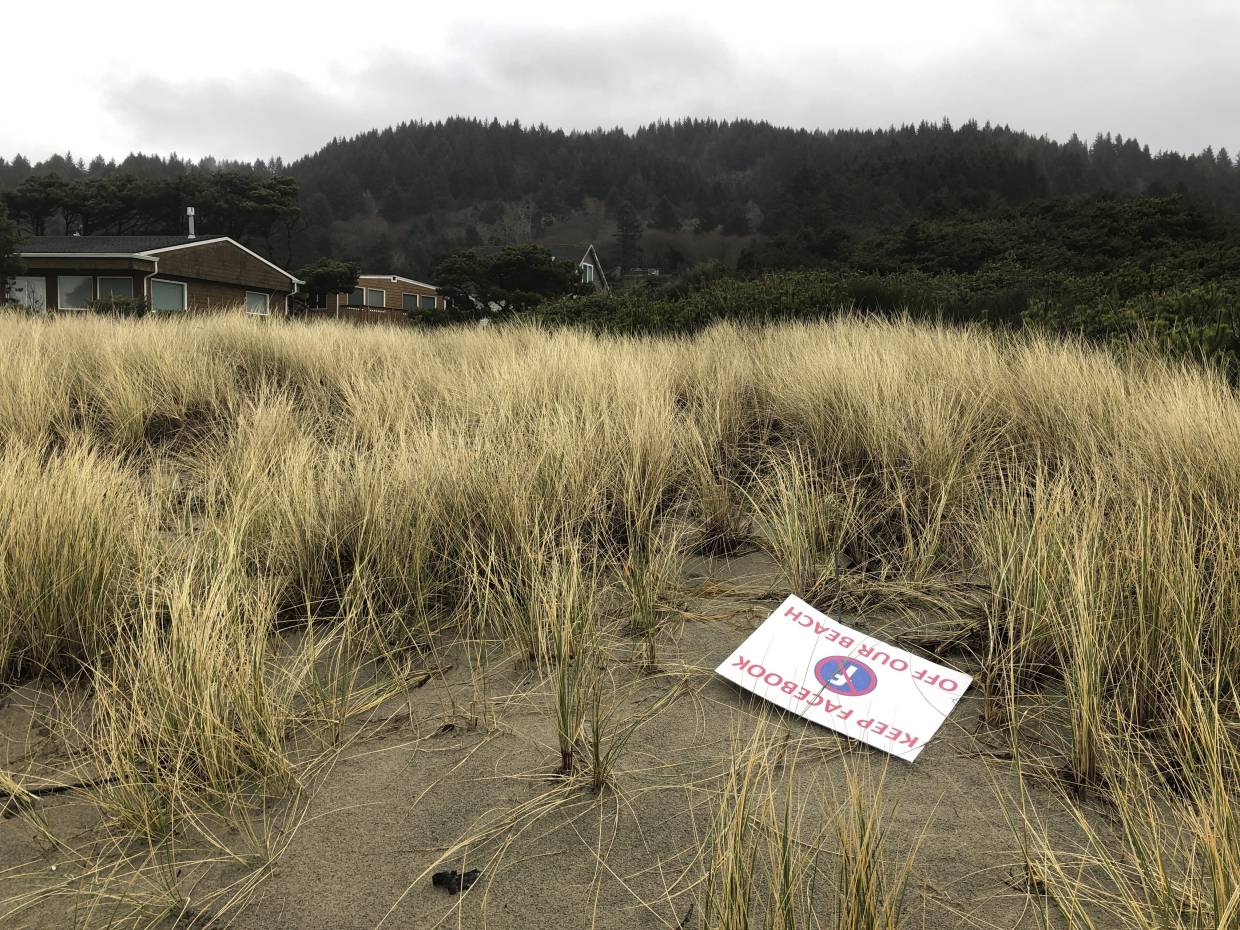 A sign denouncing Facebook's plans to put a landing site for a trans-Pacific fiber optic cable lies on the beachside property that a Facebook subsidiary bought in Tierra del Mar, Oregon.

"The reality is that the cloud is actually under the ocean,” said Nicole Starosielski, associate professor of media, culture and communication at New York University. "Files in the cloud are typically housed in a datacentre. But it doesn't become a cloud unless there are cables.”

Undersea cables have around 800 landing points around the world, according to Submarine Telecoms Forum. Nielsen said opposition to them is rare.

The one Facebook wants to put in Tierra del Mar splits off in the Pacific Ocean from the Jupiter cable that Facebook, Amazon and telecommunications companies from Japan, the Philippines and Hong Kong are invested in. The main trunk would land in Hermosa Beach, California, with the Oregon branch solely owned by Facebook.

Under the ground, the fiber optic cable would connect with another one running down the coast four miles (six kilometers) to a cable landing site in a bigger coastal town, Pacific City, where four cables are already in place. Facebook says that site cannot fit a fifth cable and cited a risk of crossing cables.

But residents are dubious.

"I don't know why they chose this place when the could have taken the cable down to Pacific City,” said Lee King, owner of the Pier Avenue Rock Shop. – AP