Gebis, co-founder and CEO of Autobon AI, sits in the driver's seat with no hands on the steering wheel as the semi-trailer truck autonomously drives around the Chicagoland Speedway in Joliet. — Photos: Chicago Tribune/TNS

Krystian Gebis did not have to keep his hands on the wheel when he operated a specially modified Peterbilt semi truck along a test track last month.

In a ghostly fashion, the steering wheel turned by itself.

Gebis, co-founder and chief executive of the Lisle, Illinois, technology company Autobon AI, spent months testing the truck's abilities to steer and brake on its own on the Chicagoland Speedway track in Joliet. And now the company is ready to try it in regular traffic on the Jane Addams Tollway.

With the Illinois Tollway's permission and cooperation, Autobon's truck will be on the road starting Monday. A driver will be behind the wheel at all times, according to Gebis. 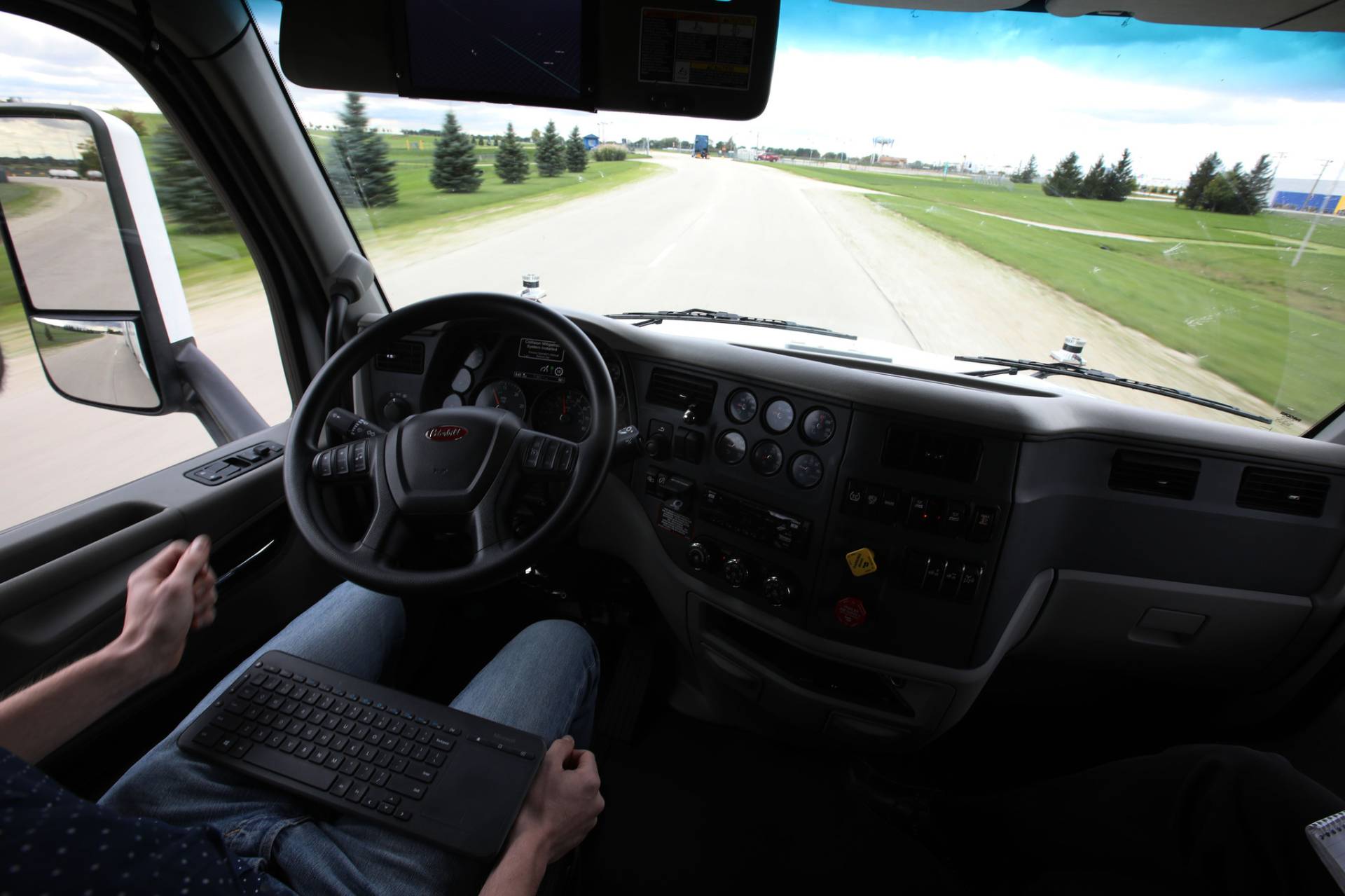 Gebis sits in the driver's seat with no hands on the steering wheel. The truck is outfitted with the autopilot retrofit system designed by his company, Autobon AI, which has developed a special technology that utilises a wind visor armed with cameras, sensors and accelerator meter to operate the vehicle.

The test by Autobon this week is a harbinger of something road users are going to be seeing more of in the coming decades – vehicles that are at least partially self-driving. The freight industry is expected to be among the early adopters of autonomous technology, in part because companies can't fill enough truck-driving jobs, said P.S. Sriraj, director of the University of Illinois at Chicago's Urban Transportation Centre.

Gebis does not see the autonomous technology provided by Autobon as a way to replace truck drivers, but as a way to make truck driving less difficult and more safe. He said he has been motivated by the large number of people killed in truck-related crashes, about 10 a day.

"You want to not have fatigue or stress be a factor in driving," Gebis said. "We are thinking of every possible way we can to make the job more enjoyable for drivers."

Gebis, 24, was a student at the University of Illinois at Chicago when he joined a university robotics group, building robots for a US Department of Defense-funded competition.

"From that point on, that was almost the last time my parents saw me... " said Gebis, whose team won an award in a Nasa robotic mining contest. "It was like a full-time unpaid job."

Gebis said he has many family members employed in the trucking industry, and learned about the liability and other problems associated with crashes. He applied his interest in robotics and computer vision to the trucking business. Instead of graduating from college, Gebis was able to convince his father, Robert Gebis, a Polish immigrant and engineer, to quit his job and help start the company. Krystian Gebis has a commercial driver's license, so he can drive big rigs.

Autobon has developed technology that can replace a truck's wind visor, which is the part that goes just above the windshield. The Autobon wind visor is equipped with multidirectional cameras, GPS and other sensors to allow the truck to monitor road conditions and respond.

Inside the truck, the steering wheel, accelerator and brakes react to information provided by the autonomous equipment. Autobon also is developing an in-cab sun visor that will contain a camera, which can be used to monitor drivers to make sure they aren't nodding off or texting. A remote control operator would be able to monitor drivers and, if necessary, pull a truck over into an emergency lane and stop it, Gebis said. The visor can be turned off when drivers are not driving and need privacy.

The Autobon technology does not allow the truck to change lanes on its own. That will be the job of the driver. The testing will allow Autobon and the Tollway to gain information about how the technology works in real traffic. 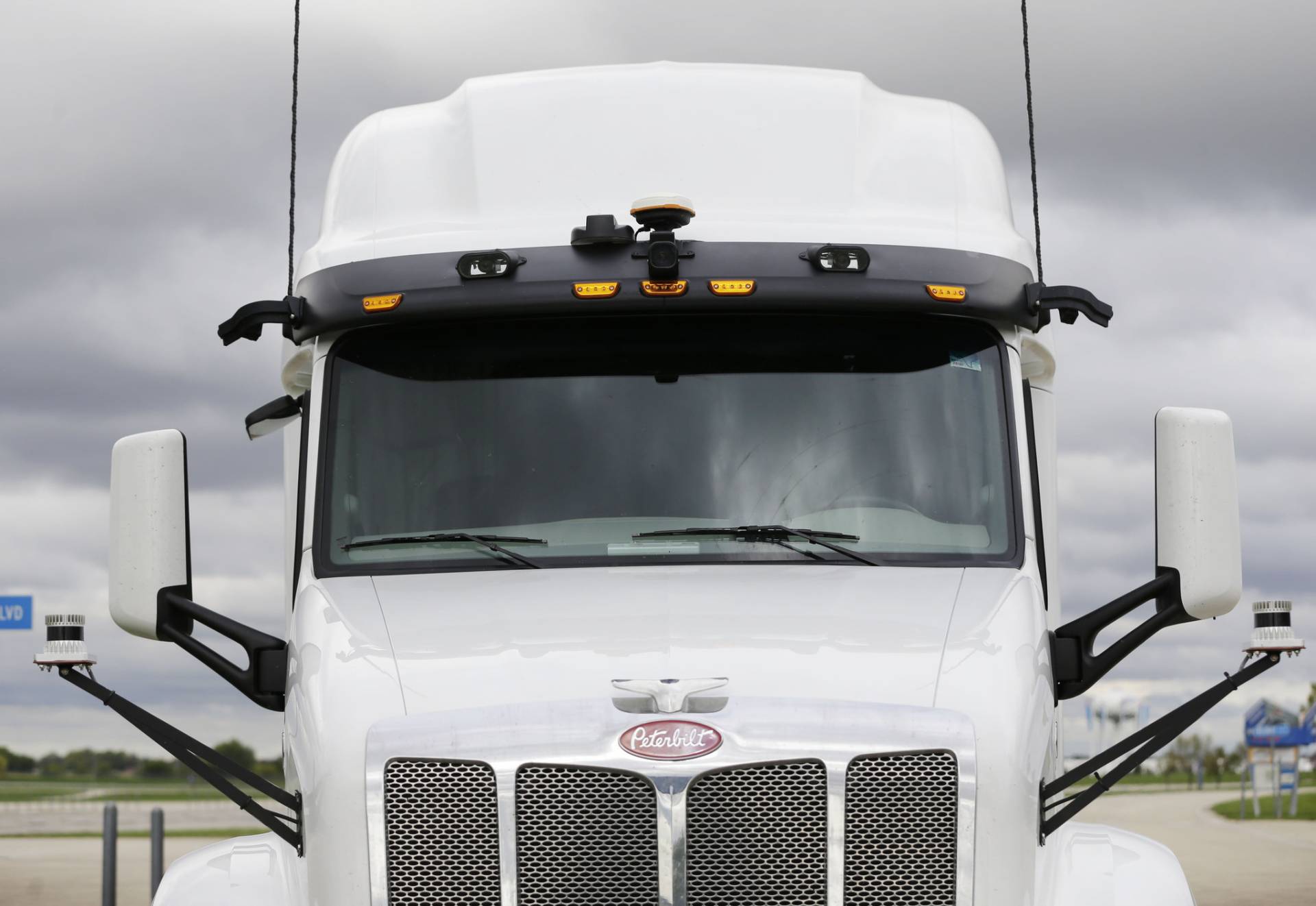 The Autobon wind visor is equipped with cameras, sensors and an acceleration meter. Autobon's system uses these instruments to autonomously drive an 18-wheel semitrailer truck, though some tasks it leaves to a human in the cab.

"We're engaging with Autobon to develop a better understanding of emerging vehicle technologies and the way these advances could be used to increase safety on our roads," Illinois Tollway executive director Josu00e9 Alvarez said in a statement.

Gebis said Autobon's goal is not to sell trucks, but to sell equipment to be installed in trucks, and to sell services to go along with that – from the monitoring of drivers to tools for how to improve deliveries. A price has not yet been set.

"They want to create all the tools for a fleet to retrofit their vehicles and gain the benefit of increased autonomy in their vehicles," said Jerry Quandt, executive director of the Illinois Autonomous Vehicles Association.

Extensive use of autonomous technology for vehicles has already started in the construction, mining and agriculture industries, Quandt said. An example is an autonomous combine, cutting barley in a field. It's also being used in airplanes, with technology controlling most of a typical flight, while pilots monitor the system.

Quandt sees more autonomy coming into the freight business. He noted that certain self-driving features are already in trucks and personal vehicles, such as automatic braking, but newer technology means more autonomy.

Since human error is behind more than 90% of fatal wrecks, boosters of autonomous vehicles say their increased use could save lives. But there are also questions about the still-developing technology, including the problem that drivers assigned to be behind the wheel could get bored, and therefore may not react as quickly in an emergency.

Uber Technologies stopped its self-driving car operation in Arizona in 2018 after a pedestrian was killed. The operator had been distracted by her cellphone, according to the National Transportation Safety Board. In a report last week, the board blamed an "inadequate safety culture" at Uber, and called on federal regulators to create a review process before allowing automated test vehicles to operate on public roads.

"I think the federal government is relying too much on the companies to certify this is safe," said Larry Willis, president of the Transportation Trades Department of the AFL-CIO, a labour organisation.

There is also concern about how autonomous vehicles could hurt jobs in transportation fields. A research paper last year predicted that autonomous technology could replace some 294,000 long-distance truck drivers in the next 25 years.

But full, driverless autonomy for trucks is years away, Gebis said. Autobon's technology is meant to fit onto trucks already in use, and will focus on small carriers. Gebis thinks that by making driving less stressful, the technology could attract more people into trucking, particularly long-haul trucking. He noted there are other jobs truck drivers do besides driving, such as unloading equipment.

"It's going to take longer than people think for widespread, fully driverless vehicles," Gebis said. "The driver is going to be needed for a long time." – Chicago Tribune/Tribune News Service