A cheese pizza is completed during a demonstration of an automated assembly platform designed for hospitality industries at Picnic in Seattle, Washington. The 16in pizza took a little more than a minute to come out of the automated machine pictured, and was then run through an industrial conveyor oven. — Photos: Seattle Times/TNS

Upon entry into an industrial building on the outer edge of Interbay, a neighbourhood in Seattle, the scent of pizza wafts throughout a large room where technology and food converge.

In the center of Seattle-based food-tech company Picnic's 8,000-square-foot lab, an automated assembly line consists of a conveyor belt propped upon a metal base. To demonstrate the production, a Picnic worker places a pre-made 16in circle of pizza dough into the first module.

A form of artificial intelligence (AI) called deep learning uses numerous layers of mathematical formulas to process and assess the size, dimensions and placement of the pizza on the belt, and to adjust the module lighting so a computer-vision camera can properly see it.

The pizza chugs along to a series of modules where a small hose evenly squirts tomato sauce over the dough, then a tray dispenses cheese, followed by a spray of pepperoni and ham. The pizza completes its journey through the automated assembly line in a little over a minute.

The finished product glistens golden brown when it emerges from the oven. It tastes like pizza.

Picnic – formerly called Vivid Robotics – recently unveiled the prototype it calls the first intelligent, all-purpose automated assembly platform designed for the food service and hospitality industries. Because the system is automated, a customer-facing app is connected directly into the machine so the pizza eaters can customise their toppings. The assembly line can create up to 300 12in or 180 18in pizzas per hour, the company says.

While the current system serves as a prototype to be used for field testing, said Picnic CEO Clayton Wood, the company expects to have a production version next year. 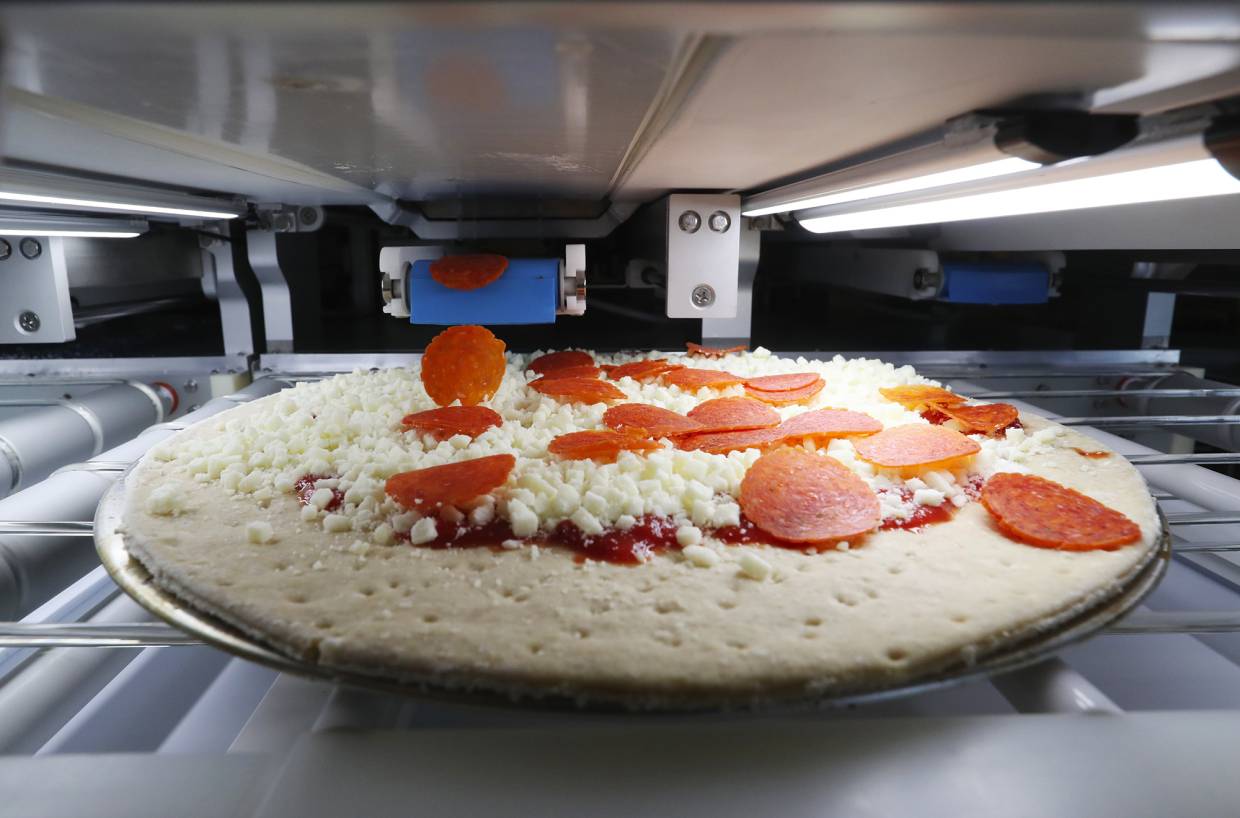 A pepperoni pizza is made during a demonstration of an automated assembly platform designed for hospitality industries, at Seattle-based Picnic.

T-Mobile Park's suite section served as the ideal testing ground due to its controlled environment, said Centerplate General Manager Steve Dominguez. Picnic delivered a prototype to the kitchen at no cost, and stationed computer engineers who ensured the system created consistently high-quality pizzas. Dominguez called the trial run a success and said Centerplate would consider using the system in the future.

"For the customers, they couldn't tell a difference, which for me was a win," said Dominguez.

"That food assembly process is labour intensive and tedious," said Wood. "It's hard to keep trained workers who make a consistent product."

Picnic's automated system requires just one worker to place the dough into the assembly line and replenish the toppings. Wood sees Picnic as a solution to the shift from dine-in restaurants to delivery and takeout, where a high volume of food is needed in a short amount of time. His company's customers are facing a staffing shortage that is creating "a great deal of stress" in the kitchen, he said.

Charles Chuman, vice-president of sales at research company CHD Expert, said immigration constraints imposed by the Trump administration have created a massive labour shortage in the food industry, particularly in states such as California and Texas. Additionally, the food industry is being disrupted by online delivery, catering, AI and robotics.

But is AI well-developed enough to replace a sous chef? Not yet, said Chuman, although the automation of pizza assembly has become more commonplace in recent years. One company called &Pizza plans to place pizza-making robots in the back of vehicles.

Surprisingly, the desire for pizza has declined partially due to the rise in carbohydrate-free diet fads and the increased diversity in cuisines, said Chuman. "You may be able to create all sorts of robot pizzas, but pizza is no longer the growth space that it was, say 10 years ago." A cheese pizza is ready to eat during a demonstration of an automated assembly platform, in the background, designed for hospitality industries at Seattle-based Picnic.

Picnic wants to perfect its pizza production and later plans to expand into the production of salads, bowls, and Mexican food using its automated platform, said Wood.

Picnic will train the operator, install and maintain, and upgrade the system for no upfront cost, and will charge customers a monthly fee dependent upon the scale of operation.

"We think that when they're delivering consistent, high quality product, they'll see increased demand for the product, as well as the savings from food waste," said Wood.

However, with the increasing ease of delivery, Chuman predicts restaurants will need to create greater experiences and services to lure customers outside of their houses. "If the restaurant itself becomes a jungle of technology where you're really just interacting with screens, we'll have to see if customers enjoy that type of experience," he said.

For now, Picnic workers serve as the guinea pigs for excess pizza. So far, no employees have complained about eating pizza for breakfast, lunch and dinner during test days, said Wood. The startup is exploring ways to donate surplus pizza and have done some "bartering with neighbours under the radar". – The Seattle Times/Tribune News Service