Dancer-actor Marsicek, 28, left, and actor Chantal Plamondon, 27, during the filming of their Mukbang Monday channel. The two focus on vegan food, reviewing the latest fast-food offerings, and often film in their cars as they chat about auditions and day jobs while munching from fast-food containers. — Brittany Marsicek/AP

"I watch one whenever I feel like eating sweets or bad foods,” said Beach, a Dallas-based product designer for a Fortune 500 company. She has lost 10 pounds and views up to three mukbang videos a day. "It’s just satisfying to watch.”

Ashley Cobb, a math teacher in Washington, D.C., is also a fan after one of her eighth-graders turned her on to the videos.

Cobb said it’s "fun and soothing” to watch people dip food in sauce and "eat with so much enjoyment”. The footage transports her to "a different place” and "has a way of making you leave reality for a second, sort of like a good book”.

Such glowing feedback is pure gold to top creators like Bethany Gaskin in suburban Cincinnati. The 44-year-old, who has 2.2 million subscribers to her Bloveslife channel on YouTube, is a top earner, clearing more than US$1mil (RM4.19mil) in ad money as she eats her way through seafood boils, ginormous servings of barbecue ribs and other drool-worthy spreads. Bethany Gaskin, 44, has 2.2 million subscribers to her Bloveslife channel on YouTube. Gaskin makes more than US$1mil in ad money as she eats her way through seafood boils, ginormous servings of barbecue ribs and a range of other drool-worthy spreads. — Nate Gaskin/AP

She recently put out a Cajun butter dipping sauce, Bloves Smackalicious, and counts Cardi B and Amber Rose among her 1.1 million followers on Instagram.

"I started off trying to cook in videos,” Gaskin said. "I cook really well, then people wanted to see me eat. I unapologetically eat whatever I want, however I want, food dripping down my chin.”

Gaskin has some advice for critics who say the excess of mukbang promotes an unhealthy lifestyle: "If you don’t like it, don’t watch.”

The word mukbang is a mashup of the Korean words for "eating” and "broadcast”, translating in English to "eatcast”. Livestreams in South Korea started sprouting up around 2009. It didn’t take long for fans to catch on and YouTubers to cash in.

"The core principle behind mukbang is that eating is a social activity,” said Victor Chang, marketing manager for the South Korea-based fried chicken restaurant chain Bonchon. It’s "a way of connecting people through meals even when they are miles apart”.

The mukbang phenomena is not focused on fancy food. It’s "more about the ‘treat yourself’ moment and the simple joy of casual conversation over a no-frills, delicious meal”, Chang said.

Some mukbangers avoid speaking in their videos, using specialised microphones to heighten the crunches and slurps. Others like Gaskin are in it for the chatter. Visiting with Gaskin on YouTube as she talks, dips and eats feels like catching up with a neighbour over the backyard fence.

At 4-foot-11 and about 130 pounds, Gaskin said she’s able to put away the amounts of food that she devours on camera due in part to her high metabolism. During a 30-minute video, she said she may actually eat for only 11 to 15 minutes.

Gaskin, who grew up poor in Chicago, was making circuit boards for the military in January 2017, when she put up her first mukbang video. She retired from her day job that May. Her husband, Nate Gaskin, retired after 20 years at General Electric to help manage her mukbang career, which is packed with speaking engagements, Make-a-Wish visits with sick kids and brand deals.

To round out the family affair, their two sons – the youngest is 18 – are also earning incomes from mukbang. 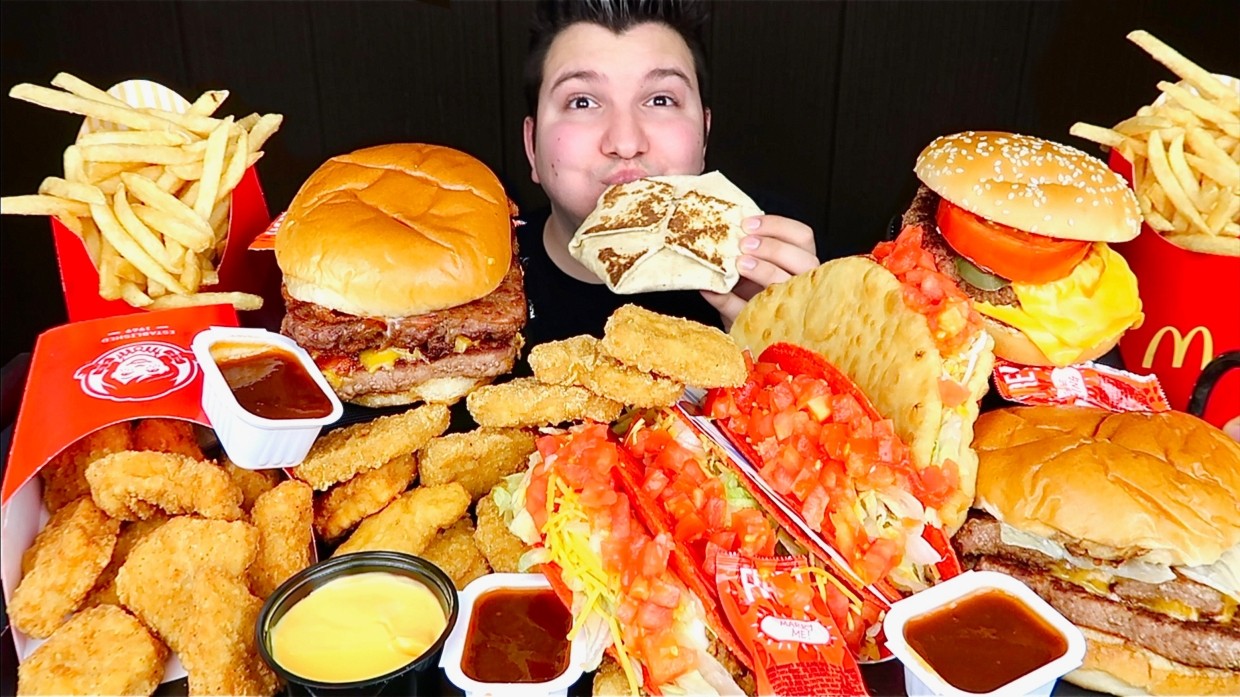 Nikocado Avocado surrounded by items from fast-food chains Wendy's and Taco Bell. Nikocado Avocado, whose real name is Nicholas Perry, 27, has three mukbang channels with 1.71 million subscribers on the largest. He’s a classically trained violinist who gave up that career struggle for mukbang in 2016. — Nikocado Avocado/AP

So does Nicholas Perry, 27. He’s a classically trained violinist who gave up that career struggle for mukbang in 2016. He started with videos focused on the vegan lifestyle he followed for about five years. Then he gave up veganism for junk food-fueled mukbangs that go deep into his personal life. He messily answers viewer questions, burps and chows down with regular "mmm, mmm, mmmmms”.

Perry has three mukbang channels under the handle Nikocado Avocado, with 1.72 million subscribers on the largest. He would not reveal how much money he earns.

"One of my friends told me to try it out,” he said from his home outside Philadelphia. "I thought she was crazy. I said to myself, ‘Who on Earth is going to watch me eat food?' Sure enough, my very first mukbang got like 50,000 views in a couple of weeks, which was a lot for me at the time, and everybody was asking, when’s the next mukbang?”

After gaining weight, Perry tries to counter all the fast food with exercise and nutrition off screen.

"I just want to do this for a couple more years,” he said. "It IS very unhealthy.”

Brittany Marsicek, 28, a dancer, actor and YouTuber, has a two-year-old Mukbang Monday channel with Chantal Plamondon, 27. The two focus on vegan food, but Marsicek eats and chats her way through non-vegan videos on some Wednesdays when she goes solo or teams up with her boyfriend.

Marsicek and Plamondon often film in their cars while munching from food containers, rather than making videos featuring a spread of food and people who mostly "just gorge”, Marsicek said.

Consumer psychologist Michal Strahilevitz, an associate professor of marketing at Saint Mary’s College of California, said mukbang "may seem crazy” at first, but "watching people binge eat is a whole lot healthier than binge eating yourself”.

She added: "Of course, there's also the risk that this is modeling bad behaviour and making it socially acceptable, particularly with younger viewers.”

Beach’s assessment? At least as it applies to her weight-loss goals: "It’s weird, but it works!” – AP