Google workers, shareholders and activists used the annual meeting of parent Alphabet Inc to protest a range of issues, including contractor rights, the tech giant’s business in China and the absenteeism of Alphabet chief executive officer Larry Page.

Shareholders filed proposals asking Alphabet management to scrap non-compete agreements, claw back compensation from executives who were found to have harassed employees and put an employee representative on its board.

Several activist groups, sometimes in conjunction with Google employees, protested outside the meeting and at company offices around the world. Topics include diversity, ethics around product launches, housing affordability and working conditions for temporary and contract staff.

About 30 protesters, including Google workers and outside activists, gathered outside the event holding signs that read “Not OK Google” and “Google creates homelessness”. Tibetan, Uighur and Chinese rights activists called on Google management to clearly confirm the company will not re-establish business relations with China, citing what they said is the government’s mass surveillance and human-rights abuses.

Google CEO Sundar Pichai said the company’s huge scale comes with a “deep sense of responsibility to create things that improve people’s lives” and benefit society as a whole. Executive chairman John Hennessy said Alphabet’s board of directors is making sure the company focuses on diversity, sustainability and societal impact. “We are deeply committed to do the right thing on these issues,” he said. 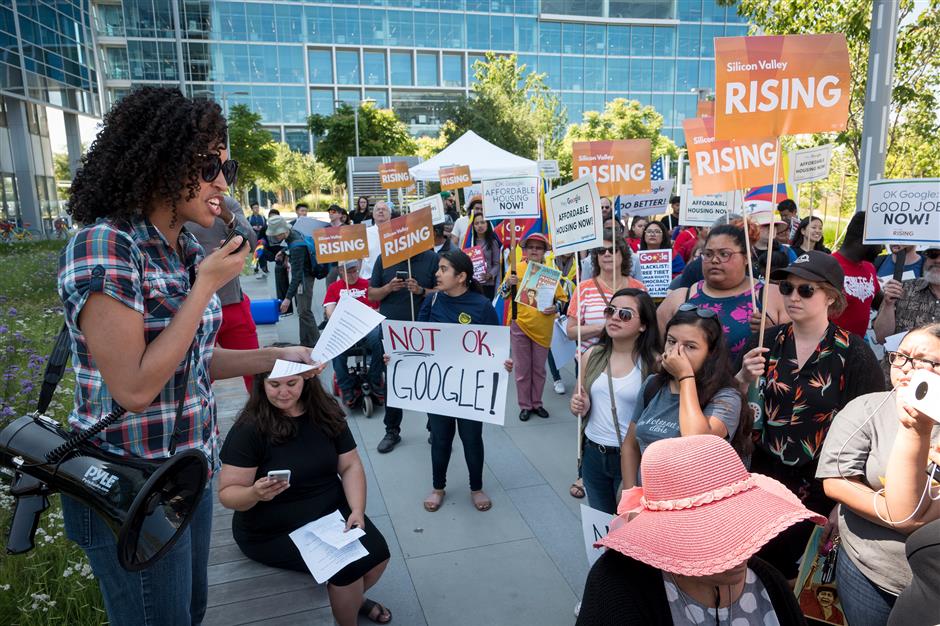 Protesters carrying signs and making their voices heard via loudspeaker while demonstrating outside the Alphabet Inc annual shareholders meeting in Sunnyvale, California.

The meeting is the latest flare-up in a roughly two-year effort by some Google employees and outside activists to push the company to be more accountable to workers, stockholders and the communities where it operates.

Google has a famously open work culture, where employees of all levels are encouraged to speak their mind and suggest changes to company policy. That’s created some headaches for the tech giant. Google shelved a plan to build a censored search engine for China after news of the project leaked and employees rebelled against it. The company also stepped back from one military contract and stopped forcing employees to sign away their right to bring claims against it in court.

Google’s critics only have so much power though. Shareholder proposals like the ones advanced at the annual meeting are almost always rejected because the company’s founders control the majority of the votes through special shares.

“I was wondering where the CEO of Alphabet is. Year after year there’s no CEO here. It’s a glaring omission,” especially for someone with such a large stake in the company, one shareholder said during the meeting. Page and Google co-founder Sergey Brin control Alphabet through special voting shares, but they have stopped showing up at annual meetings in recent years.

The shareholder replied that the annual meeting is the only time investors have a chance to ask the CEO questions directly.

Marie Collins, a Google employee who has worked there for about six years, said the company lacks accountability, citing Page and Brin’s absence as part of the problem. The executives rarely attend company-wide employee meetings anymore, she added. Google used to have a good relationship with employees, but that changed about a year ago, Collins said.

Google engineer Irene Knapp spoke in favour of a proposal to tie executive compensation to the company’s progress on diversity and inclusion. Knapp cited research by the group AI Now showing that bias in artificial intelligence technology is related to the lack of diversity in the industry.

Other Google employees spoke in favour of proposals on adding a worker representative to the board and a call for a report on the impact of Google’s Dragonfly Chinese search project.

“Alphabet sits at an inflection point,” facing antitrust investigations and other issues, one employee said, in support of the proposal to add a worker representative to the board. “It cannot afford to ignore the storm brewing.” – Bloomberg