The jerky ride into the future: What it’s like in a driverless car

HANDOUT - From the outside, the Mercedes van looks unspectacular, but in this test vehicle from the car parts supplier ZF there are no pedals, steering wheel or driver - the van completely drives itself. Photo: ZF/dpa-tmn - only for use in accordance with contractual agreement

The first autonomous buses are already rolling on the roads, and from the experts' point of view, this is just the beginning. But how does it feel when the machine takes command?

The car glides off quietly. Only the pump of the steering mechanism can be heard. This Mercedes van has neither pedals nor a steering wheel. It does have a joystick and an emergency stop button in the centre console – just in case. Otherwise, this ZF test vehicle drives itself, as if by magic.

This is an autonomy level 5 car. Level 4 vehicles are controlled by a computer system, but a driver can intervene if something goes wrong because they are fitted with a steering wheel, pedals and gear stick. Stage 5 cars have none of these controls – the machine is in charge. The autonomous minivan "Mover" by ZF and e.Go Mobile will run electrically for up to ten hours. — e.GO Moove GmbH/dpa

ZF’s CEO Wolf-Henning Scheider believes that driverless cars will be on our roads. But there’s a lot of work to be done to overcome prejudices and fear. “For this to happen autonomous driving must be 100 times better than human driving,” he says. “It has to be absolutely safe. Only then will it be accepted.” And so, for now, it's only possible to drive on a closed-off course.

It feels a bit strange when you get into the “driving seat” in one of these autonomous cars. The first thing you notice is the lack of a steering wheel. And there’s nothing smooth about the way the vehicle starts off – even a learner driver would be better – the robot van changes speed more abruptly, and the ride feels more jerky. Despite that, the autonomous car precisely follows its path, and manages to brake properly in front of obstacles.

After a few laps the passengers start reading messages on their smartphones, safe in the knowledge that this test vehicle is trundling along at only 20 km/h, and we’re on a cordoned-off track. In selected North American freeways, the Cadillac CT6 with the integrated "Super Cruise" system already drives at up to 85 miles per hour (around 137 km/h). — Cadillac/dpa

But it doesn’t have to be that slow. In selected North American freeways, the Cadillac CT6 with the integrated "Super Cruise" system already drives at up to 85 miles per hour (around 137 km/h).

The steering aid can be activated at the touch of a button, and the Cadillac then detects the route, line and accommodates for other traffic. The driver can take their hands off the steering wheel and concentrate on other things.

But at such a high speed, your palms can get a little sweaty. You always have the feeling that you have to intervene, your hands always float above the steering wheel – even though the car keeps to its lane cleanly and doesn’t make any mistakes during the two-hour drive. 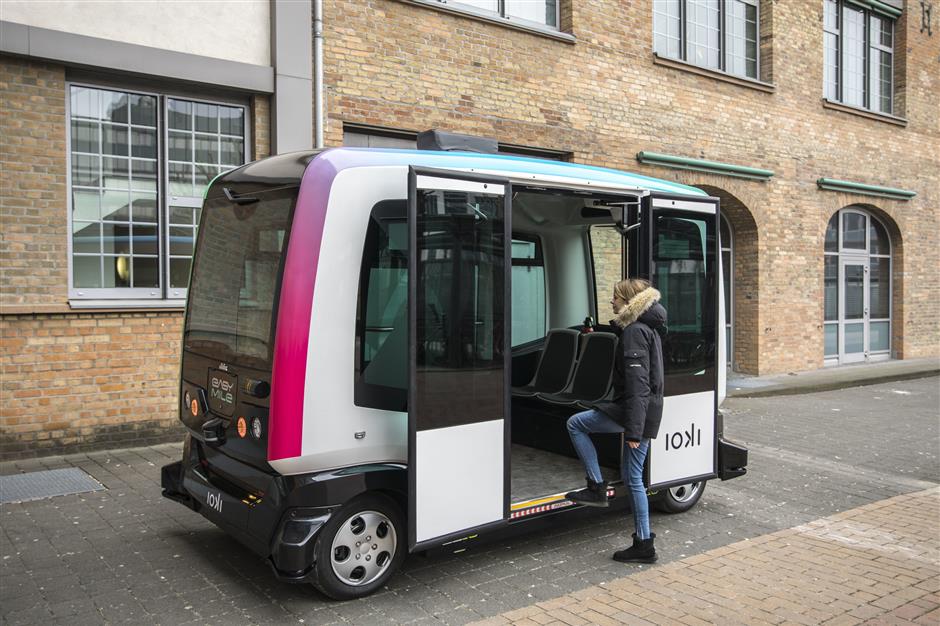 Since 2017 Deutsche Bahn has been testing autonomous minibuses with the Ioki brand on public roads in Bad Birnbach in Bavaria. — ioki/dpa

When driving highly automatically in Stage 3, the car takes care of itself. But the driver must be able to intervene at all times. At the moment Cadillac only offers the Stage 3 system in the US and Canada, where it is currently active on around 215,000 kilometres of roads.

The current Audi A8 could already drive to Stage 3 if it were allowed to, and the next Mercedes S-Class should be able to do the same. But such driver assistance systems aren’t legal in Germany at the moment. The existing autonomous cars are test vehicles and may only be used on special routes in some federal states. Behind the steering wheel there is usually a safety driver who can intervene if necessary.

Jan Burghard, managing director of the consulting firm Berylls Strategy Advisors, expects particularly protected areas for robotic cars within a few years. These will initially be in industrial areas, but will also start appearing in normal traffic, especially in China, the Middle East and parts of the US. In the German town of Monheim am Rhein you can experience the driverless feeling by hopping on a minibus from the bus station into the old town centre. — Stadt Monheim am Rhein/dpa

There’s still a long way to go before autonomous driving in cities with level 4 or level 5 is possible in Europe though, and the automotive economist Stefan Bratzel predicts that by 2030 only a small single-digit percentage of newly registered vehicles in stage 4 or 5 will be able to drive on the road.

So this is all just a distant dream of the future? Not quite. In the German town of Monheim am Rhein, for example, you can experience the feeling later in 2019 by hopping on a minibus from the bus station into the old town centre. It’ll only be travelling at 20 km/h, and there’ll be a person on board to intervene in case of emergency, but it seems we’re already well on the road to self-driving vehicles. – dpa