How big security data is scanning the holiday crowds in China

For most people heading to Shanghai’s Bund area over the Lunar New Year, there will be few outward signs of change from four years ago when 36 people were crushed to death.

The victims died under the weight of a crowd that had gathered to celebrate the start of 2015, catching revellers in a fatal bottleneck as they tried to move up and down a staircase.

Shanghai authorities admitted the tragedy was due to miscalculations about the crowd’s size and a lack of police officers at the site.

The failure forced a rethink in public security in the megacity and hastened the roll-out of technology to manage mass gatherings.

Today, on the ground, the most visible police presence are “human walls”, armed officers who move in formation to direct people around congested areas.

But the authorities are also relying on artificial intelligence, surveillance equipment and big data to direct those officers and avoid disaster, according to a police source.

Nevertheless, that technology has its limits and raises privacy concerns.

The Bund attracts about 300,000 people a day during big holidays and is one of the city’s most popular destinations among the city’s 300 million annual visitors.

The historic waterfront is also one of the major attractions, including Shanghai Disney, under the macro gaze of a “real-time crowd monitoring system”, according to the source.

The system amalgamates location-based services – the kind used to track the movement of people and vehicles – and other digital information to translate the size of a crowd into a thermal image in real-time, using colours from red to green to indicate density. Based on that information, traffic controllers could then direct officers working on foot, the source said.

“We are a lot more confident now, because technology gives us access to real-time crowd information, and we can react immediately according to the circumstances, and also predict what is coming,” the officer said. Cai Lixin was among the senior Shanghai police officers on duty that night four years ago.

He said the critical concern in crowd control was maintaining a balance between the inflow and outflow of people.

“The (monitoring) system gives me critical information to make decisions. When the human density on the Bund reaches two people per square metre,we will kick in some control measures, like cutting off entry to underpasses. If the density is expected to continue to rise, I will apply more measures to curb the inflow.”

On the night when the fatal crush happened, some estimated the density of the crowd to be six or seven people per square metre.

But Cai said that he and his team still used their binoculars to keep an eye on the ground to make sure the teams down at the Bund executed orders correctly.

Another new technology in use to improve crowd flow is terahertz imaging, highly sensitive scanners that speed up security checks dramatically in places like major train stations. 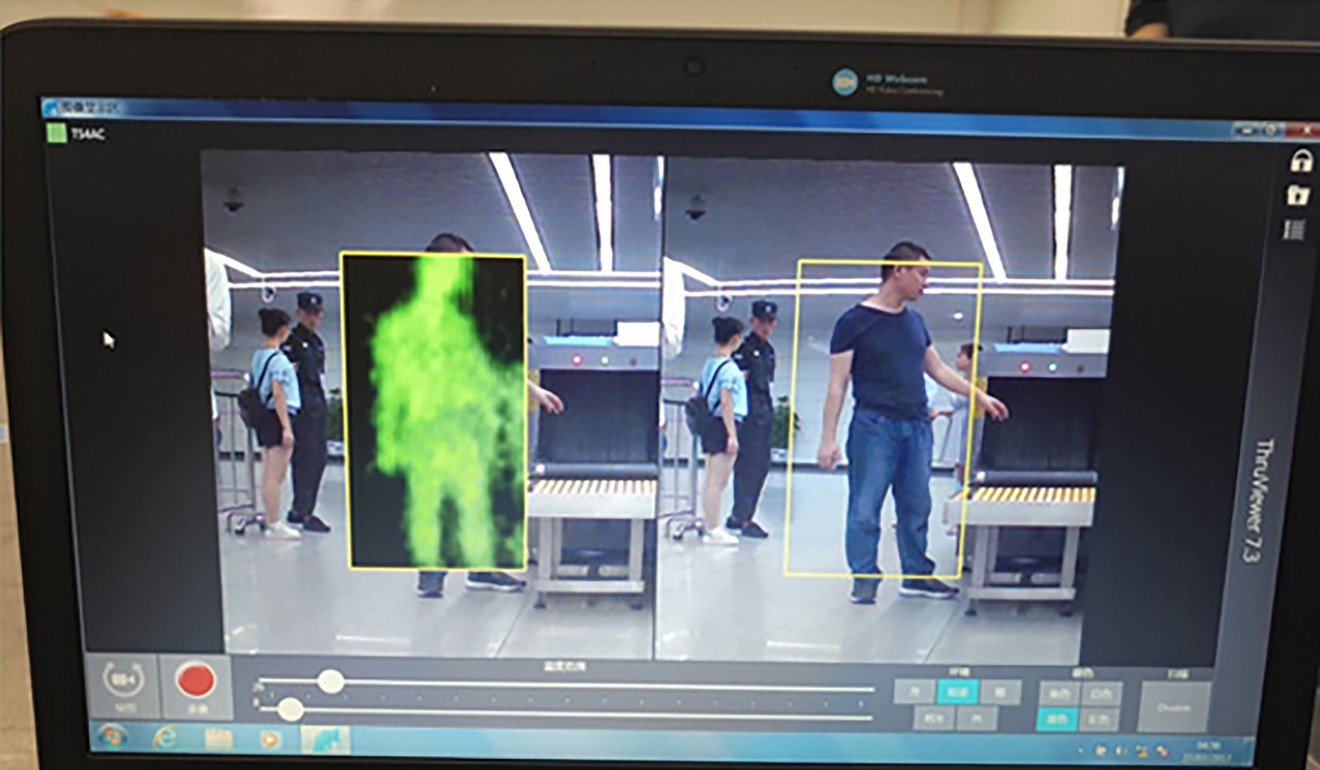 This is particularly important during the Lunar New Year when the transport system must cope with hundreds of millions of people heading home for the holidays.

The scanners were first used in some subway stations in Beijing last year and are also being tested in the capital’s train stations as well as rail hubs in Shanghai and the Shenzhen metro system. Chinese-developed terahertz scanners were also deployed for the G20 meeting in Hangzhou in 2016 and Shanghai’s major import expo last year.

According to Liu Wenbin, director of the Shanghai Criminal Science Research Institute, the technology can scan more than 1,500 people each hour, a fourfold increase on the previous rate.

Bowei Thaherz Information Technology, making the scanners, said previous generations of scanners could only detect metal objects but the terahertz units could analyse liquids, gels, ceramics and powder in a matter of seconds. The push for wider use of technology in policing comes from the top.

At a meeting of senior law enforcers in mid-January, Chinese President Xi Jinping called on the cadres to “promote the technological innovations such as big data and artificial intelligence” in their work. Just five days later, Xi again spoke about the importance of “improving the multidimensional, social security prevention and control system based on information technology”.

Chinese Minister of Public Security Zhao Kezhi has also spoken repeatedly about the need to “build a smart police force”, creating a “big data” task force within the ministry to “replace human labour with computing power”.

In addition, the Ministry of Finance officially earmarked 1.13tril yuan (RM680mil) for public security in 2018, almost the same as its defence budget.

Some of the spending is apparent at the micro level, with police using facial recognition cameras to identify wanted individuals.

At road entries to big cities such as Beijing and Shanghai, police have installed “gantry surveillance systems” to scan motorists and passengers for suspects on the national police database, a process that reportedly takes 10 seconds per person.

Face-recognition technology has been deployed widely at the street level in China. A fugitive wanted for the murder of her boyfriend 17 years ago was detected at a motorway checkpoint last month. About a dozen suspects were spotted in the concert crowds of Hong Kong Canto-pop star Jacky Cheung, known as “God of Songs”, last year.

A police source said more than 1,000 motorists had been caught driving without a valid licence by this system in Shanghai alone, since the system’s soft launch two years ago.

Besides the cars, the Shanghai traffic police have also piloted the technology to catch cyclists in the wrong bicycle lane, among other offences.

Some suppliers of the technology claim that it is possible to identify people even if their faces are partially obscured.

In the southern city of Zhongshan, a police officer said the system identified a suspect in a robbery within half an hour even though the cameras captured only the back of the suspect fleeing on a motorbike, the official Zhongshan Daily reported.

In the past, it could take police days to sift through surveillant footage in surrounding area to build up a profile of the suspects.

But there are clearly flaws in the technology. Dong Mingzhu, chairwoman of China’s biggest maker of air conditioners Gree Electric Appliances, found her face splashed on a huge screen erected along a street in the port city of Ningbo that displays images of people caught jaywalking by surveillance cameras last November.

That not-so-intelligent surveillance system picked up Dong’s image from an advertisement on the side of a moving bus.

Wang Ran, a Beijing-based specialist in big data law, says legislation on personal privacy and information use needs to catch up with advances in police surveillance technology.

She said mainland China should learn from Hong Kong regulations to strike a balance between data use and protection of personal information.

Wang also stressed that the principle of procedural justice should also be adopted in the investigation involving big data to better protect the rights of the person investigated. – South China Morning Post