RALEIGH, North Carolina: Every apartment at the Cardinal at North Hills, a two-year-old retirement and assisted-living community in Raleigh, comes equipped with a pull cord.

It's a feature that is meant to alert staff in case of accidents, like a medical emergency or a dangerous fall.

But resident Libby Powell has always worried that if she were to fall in her own apartment she wouldn't be able to reach the cord.

"If you fall in the middle of your apartment you are not going to want to drag yourself to the cord," Powell, 76, said.

Now, thanks to a partnership between the operators of the community and a Raleigh-based startup, that fear is no longer in the back of her mind. If she were to fall now, she says, she wouldn't have to move at all. Instead, she would simply have to shout, "Hey, Alexa ... "

Since 2017, startup K4Connect has worked with Cardinal owner Kisco Senior Living to make the community more digitally connected by using the startup's software to seamlessly connect multiple devices regardless of the manufacturer. That lets residents remotely manage tasks such as managing their room temperature, monitoring their health and medication as well as keeping up to date on community events. Families of residents can also use an app to keep track of their family member.

As part of that partnership, the company, just in time for Christmas, provided an Amazon Alexa voice device for every apartment – something the Cardinal says makes it one of the first senior-living communities to incorporate voice technology to such a degree.

In some ways, the Cardinal, with 270 residences, has become a testing ground for new services from K4Connect, which works with 13 senior-living providers and more than 60 communities across the United States. The startup – founded in 2013 by Scott Moody, who previously ran the company that created the fingerprint sensor technology used in Apple iPhones – has raised more than US$22mil (RM91mil) in capital and now employs 55 people.

"The Cardinal has become a really great area for us to test ideas and to work with residents on feedback," said Derrick Minor, manager of people operations for K4Connect. 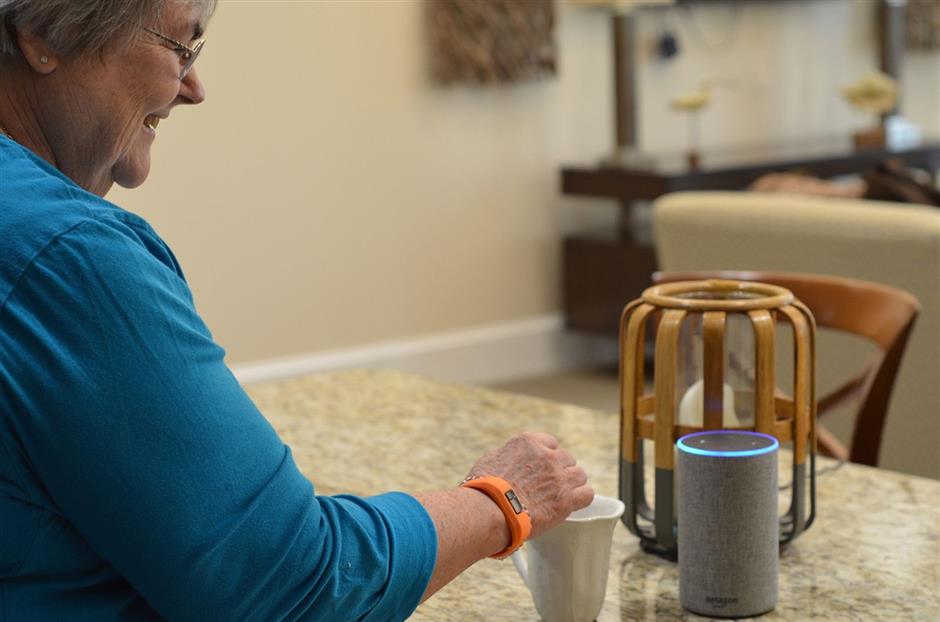 Minor, who recently left Raleigh's Office of Economic Development and Innovation to join K4Connect, said that new technologies are targeted toward the next generation of consumers, but in many ways, they can improve the lives of older users. "These types of technologies for older adults can help them live more independent, vibrant lives," he said.

"We knew from the very beginning that our residents that moved here are very discerning," Ford said. "They've experienced a lot of things in their lives – probably 95% have college degrees and they really have embraced technology. A lot of them – even though they might be in their 80s or 90s – are individuals that used technology all their lives, so we really wanted to continue using technology to help their quality of life and help them age in the best possible way."

To do that, Ford said, meant partnering with a startup like K4Connect and continuing to change what is offered to residents.

Case in point: the tablets that residents get when they move in.

Residents use those tablets to control things like their thermostats and to access community information. But, the tablets were not accessible to 100 percent of residents, so the community wanted to see if voice service could bridge the gap.

"I would say about 70% to 75% of residents here use the tablets, which is good, but there's still that other group of about 25% that are not using it," Ford said. "And hopefully this might reach more of them."

Powell, who was one of about a dozen residents who piloted the use of Alexa at the Cardinal, said the voice system should get more people involved.

"That was one thingsI was very happy about because we have several people with very low vision and we have several that are blind," Powell said. "So they can't use the tablets, but they can use Alexa."

Powell added that learning how to use Alexa was also much easier than the tablets.

"The (tablets) have been much more frustrating than Alexa. Alexa is simple," she said. "It's nice just to have to say, 'Alexa, set the temperature to 71 degrees'."

Powell added that while she did have concerns about privacy with a device that is always listening to her, it has been more helpful than she would have thought.

For Judy Mock, a 76-year-old resident, the tablets have always been a little frustrating to use, so she is glad K4Connect has added voice as an option.

"I have a doctorate degree," she said, "and an umbrella can be a mechanical problem for me. So I am excited to have a technology that I don't have to figure out."

To aid residents' technology education, the Cardinal has a weekly meet-up to help residents who are struggling with their devices or them a new aspect of it. For example, the K4Connect Alexa devices are expected to add features every week.

"Anything they can do to continue to learn and try different things," Ford said, "whether that's just doing mental aerobic exercises or something that keeps them stimulated, and certainly using technology can help with that. Ultimately, that improves your quality of life – that they can cognitively stay focused and sharp can improve their medical health as well."

Deanna Hill, another resident at the Cardinal, said she is positive the Alexas will be a benefit for a lot of residents, especially the ones who have struggled to master the tablets.

"I am glad that they are doing this for the community," Hill, 78, said. "If we can't learn to use the computer, we can learn to use our voice." – The News & Observer/Tribune News Service