Amazon will consider opening up to 3,000 cashierless stores by 2021

Employees prepare fresh food items at the Amazon Go store in Seattle, Washington, U.S., on Wednesday, Jan. 17, 2018. After more than a year of testing with an employee-only focus group, Amazon Go opens to the public Monday in downtown Seattle, putting to the test the online retailer's technology that lets shoppers grab what they want and leave without paying a cashier. Photographer: Mike Kane/Bloomberg

Amazon.com Inc is considering a plan to open as many as 3,000 new Amazon Go cashierless stores in the next few years, according to people familiar with matter, an aggressive and costly expansion that would threaten convenience chains like 7-Eleven Inc, quick-service sandwich shops like Subway and Panera Bread, and mom-and-pop pizzerias and taco trucks.

Chief executive officer Jeff Bezos sees eliminating meal-time logjams in busy cities as the best way for Amazon to reinvent the brick-and-mortar shopping experience, where most spending still occurs. But he’s still experimenting with the best format: a convenience store that sells fresh prepared foods as well as a limited grocery selection similar to 7-Eleven franchises, or a place to simply pick up a quick bite to eat for people in a rush, similar to the UK-based chain Pret a Manger, one of the people said.

An Amazon spokeswoman declined to comment. The company unveiled its first cashierless store near its headquarters in Seattle in 2016 and has since announced two additional sites in Seattle and one in Chicago. Two of the new stores offer only a limited selection of salads, sandwiches and snacks, showing that Amazon is experimenting with the concept simply as a meal-on-the-run option. Two other stores, including the original Amazon Go, also have a small selection of groceries, making it more akin to a convenience store. Amazon Go customers can pick up ready-made sandwiches, including a US$5.99 tofu banh mi. — Seattle Times/TNS

Shoppers use a smartphone app to enter the store. Once they scan their phones at a turnstile, they can grab what they want from a range of salads, sandwiches, drinks and snacks – and then walk out without stopping at a cash register. Sensors and computer-vision technology detect what shoppers take and bills them automatically, eliminating checkout lines.

The challenge to Amazon’s plan is the high cost of opening each location. The original Amazon Go in downtown Seattle required more than US$1mil (RM4.14mil) in hardware alone, according to a person familiar with the matter. Narrowing the focus to prepared food-to-go would reduce the upfront cost of opening each store, because it would require fewer cameras and sensors. Prepared foods also have wider profit margins than groceries, which would help decrease the time it takes for the stores to become profitable.

News of the company’s potential ambitions for Amazon Go sent shares of grocery and retail rivals lower. Walmart Inc declined as much as 0.6%, reversing an earlier gain, while Target Corp dropped about 1.5% and Kroger Co slid as much as 3.1%. 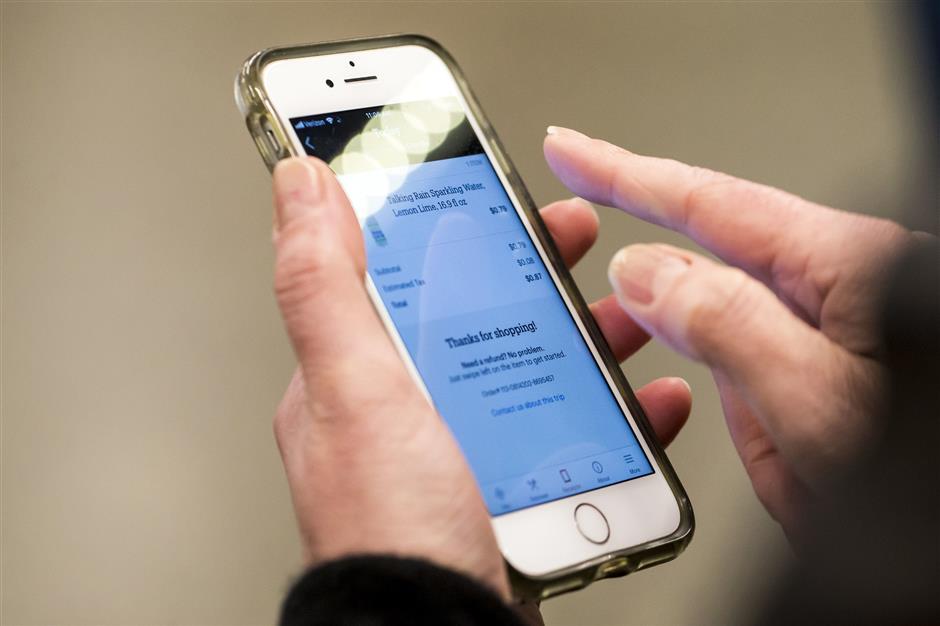 Shoppers can keep track of the purchases they are charged for through the Amazon Go app, and delete products if they are billed incorrectly. — The Seattle Times/TNS

Amazon has become the world’s largest online retailer by offering a vast selection and quick, convenient delivery. In physical stores, Amazon is emphasising convenience over selection to win business. Amazon’s other brick-and-mortar initiatives include about 20 bookstores around the US and the natural grocery chain Whole Foods Market, acquired last year. Amazon Go is the most distinctive of all of its physical stores.

At a Washington D.C. event last week, Bezos said Amazon was “very interested” in physical stores, but only if it has something new to offer. “If we offer a me-too product, it’s not going to work,” he said.

Such an expansion could put Amazon back into an investment cycle. Bezos is willing to lose money on long-term initiatives when he smells opportunity. Amazon Web Services, the company’s fast-growing and profitable cloud-computing business, was unprofitable for years and Bezos stuck with it, according to a person familiar with the matter. Amazon also routinely loses money expanding internationally. 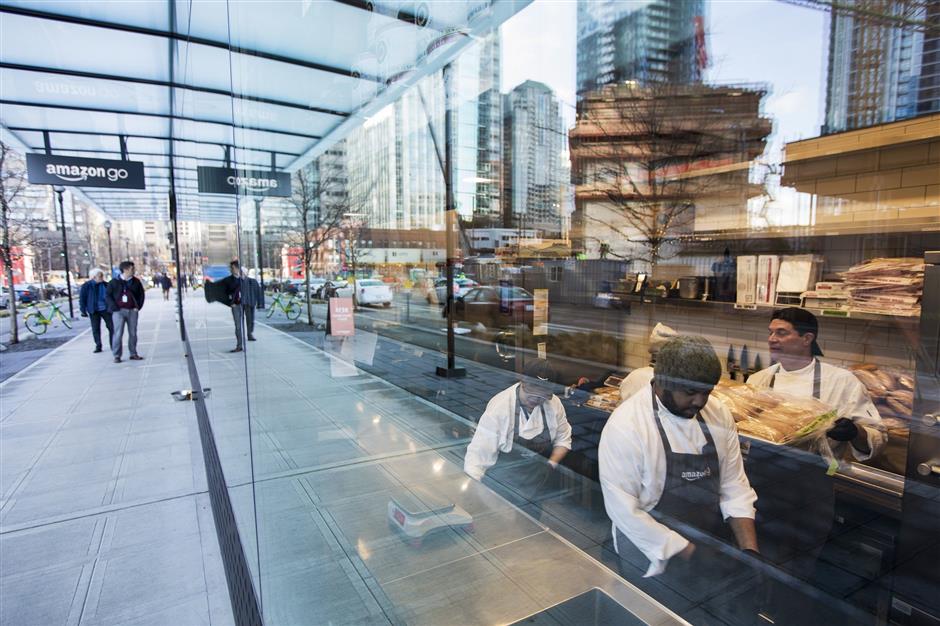 Employees preparing food in the kitchen with a streetside view at the Amazon Go store in Seattle. — The Seattle Times/TNS

Adding 3,000 convenience stores would make Amazon Go among the biggest chains in US. The Internet giant is considering plans to have about 10 locations open by the end of this year, about 50 locations in major metro areas in 2019, and then as many as 3,000 by 2021, said the people, who requested anonymity discussing internal plans. Opening multiple locations in proximity, like it’s doing in Seattle, could also help Amazon reduce costs by centralising food production in one kitchen serving many stores.

The US currently has 155,000 convenience stores, with 122,500 of them combined with gas stations, according to industry group NACS. Non-fuel purchases at convenience stores totalled US$233bil (RM964.03bil) in 2016, with cigarettes and other tobacco products the best-selling items.

Amazon is targeting dense urban areas with lots of young, busy, affluent residents willing to spend a little more than a typical fast-food experience for better quality food, the people said. The target locations make it less of a threat to suburban gas station-convenience store combinations and more of a threat to big cities’ quick-service eateries, such as Subway Restaurants, Panera Bread Co and Pret a Manger. UK-based Pret has 450 locations worldwide, including New York, Boston and Chicago, focusing on fresh, healthy grab-and-go foods.

Amazon Go will be more of a threat to fast-casual restaurants if it is targeting cities, said Jeff Lenard, vice president of NACS. Shoppers rate location and a lack of lines as the most important factors when shopping for convenience, he said.

“Amazon Go already has no lines,” Lenard said. “The key to success will be convenient locations. If it’s a quarter mile from where people are walking and biking, the novelty of the technology won’t matter. It’s too far away.” – Bloomberg