What will we be driving in 2025? Designers consult the crystal ball

HANDOUT - Autonomous cars like the EZ-GO concept from Renault want to make getting around in groups a more social affair by taking the strain off the driver. Photo: Renault/dpa

What will the cars of the future look like? Will they drive together as platoons with robots in charge, use new-fangled hydrogen-driven motors and even be able to fly?

Designers are busy developing future cars in a world where mobility is taken for granted despite the negative fall-out for the environment and the hundreds of thousand of people killed annually in road accidents.

Connected autonomous cars may mean that traffic jams could vanish and occupants will be able to use smartphones and tablets as they are whisked to work. Driving is also set to get safer.

Wilko Stark, who works as product planner at Mercedes-Benz, believes that thousands of autonomous cars will be on the road at the beginning of the next decade.

“They are likely to be used initially by mobility services like MyTaxi or for car-pooling solutions,” says the expert.

This is because the bulky Lidar sensor mounted on the roof of many self-driving cars is expensive to make. It is also unlikely to get cheaper within the next five to ten years.

The light detection and ranging device observes the world around the car by firing off laser beams at up to 20 times a second. It measures how long it takes for the light to return to the Lidar and creates a 360-degree field of vision. This allows the vehicle to navigate on its own.

Robot cars are likely to be used in cities first, where high-resolution maps provide reliable details of streets and roads. Stark believes autonomous cars will blend into the future street scene alongside public transport. Mercedes wants its F 015 Luxury to be able to communicate with the outside world using flashy LED lights. — Daimler AG/dpa

The robot cars being fettled by Mercedes-Benz have no steering wheel or driver. They offer space for 10 occupants and are powered by an electric motor.

Autonomous cars will share the roads with conventional cars, Stark believes. “Drivers will not have to adjust to a completely different world of motoring,” says the Mercedes man. In rural areas self-driven cars will probably remain the norm.

Future cars may also look very similar to those on the roads today, says Cologne-based design professor Paolo Tumminelli. “Manufacturers are committed to a platform strategy which they cannot just abandon,” says Tumminelli. 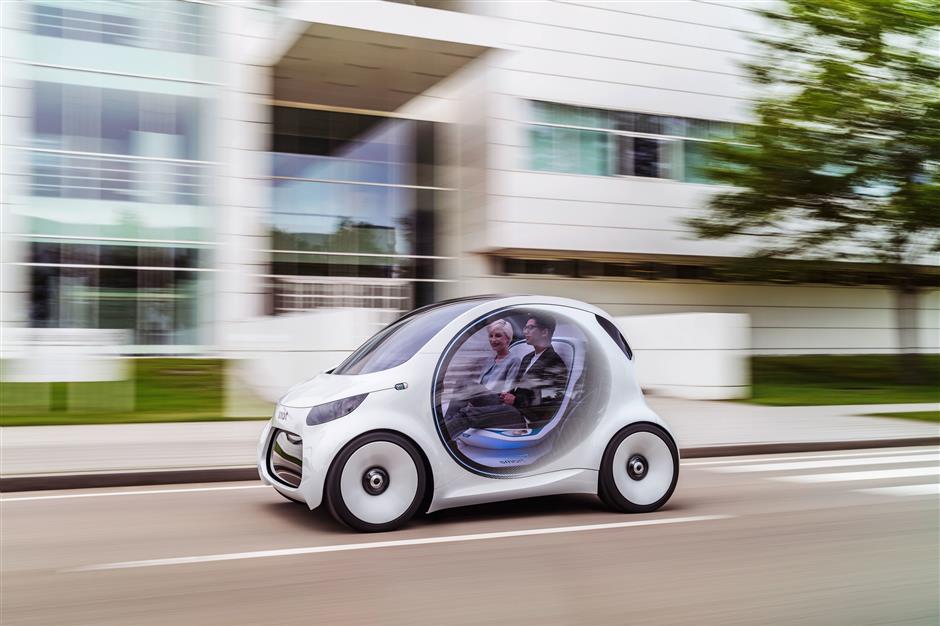 Concept cars like the Smart vision EQ want to make it possible for drivers to sit back with their hands on their lap while their car does the driving. — Daimler AG/dpa

“A car shaped like a rounded-off box which can negotiate city streets at a steady speed would be much more agile than today's vehicle types,” says the designer. He expects SUVs and sports cars to become automotive rarities – at least in cities.

The changes are likely to become evident from around 2020, say the experts. Also likely are closed transport systems, with synchronised journeys operated by connected cars.

As technology gets cheaper, cars powered by hydrogen fuel-cells are likely to replace current petrol and diesel-driven variants.

Volkswagen has meanwhile been showing the possible way ahead with its ID family of futuristic concept vehicles. All are electrically powered, offer loads of comfy seating space inside and have cockpits packed with new technology. 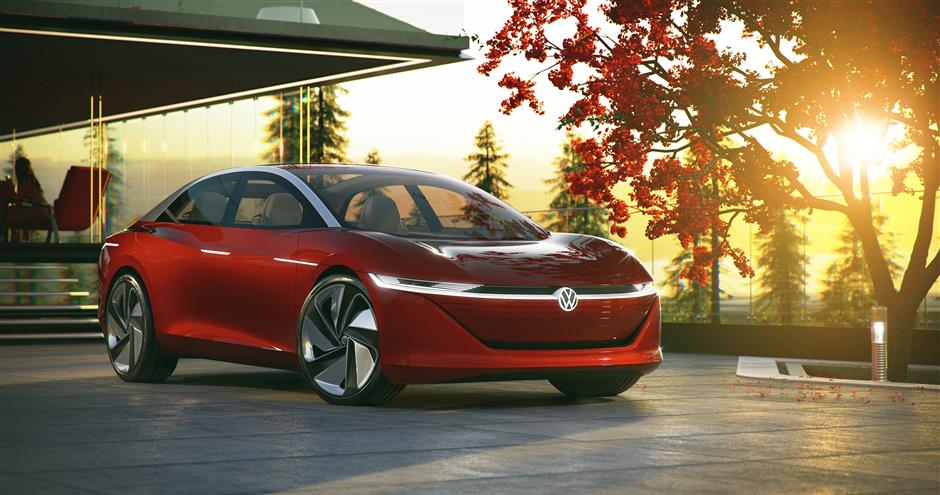 Volkswagen's ID Vizzion is a sleek limousine that drives itself and communicates with passengers via voice and gesture control. — Volkswagen AG/dpa

Among them is the ID Vizzion, a sleek limousine that drives itself and communicates with passengers via voice and gesture control.

“By the second half of the 2020s we expect driver assistant systems to take over more tasks and relieve the driver,” says Sonja Tyczka from VW.

Electrification alone will not change the appearance of cars much but when robot cars come on stream “digital chauffeurs” without steering wheel or pedals will not just navigate and steer but recognise both occupants and obstacles.

The automative avatars will automatically adjust climate control inside the car and playlists of music to suit passenger preferences.

It is likely to be some time before autonomous cars can cope with all kinds of weather and traffic situations and in the meantime humans will have to learn how to interact with the new machinery.

“By that time things like top speed or acceleration will play no part in selling cars to people,” said Matthias Kempf of the Berylls Strategy Advisors in Munich. He sees vehicles “whirring through the streets silently and safely”. — dpa