Want a Fitbit that measures how productive you are at work? This company is betting your boss does

CEO Brad Killinger, left, and Khiv Singh, vice president of global marketing, speak while doing a product demonstration inside the temporary offices of Sapience Analytics in Frisco, Texas April 12, 2018. Sapience is a platform that allows companies and workforces to view analytics and data on workforce productivity.(Andy Jacobsohn/The Dallas Morning News/TNS)

If you glanced at the screen, it probably wouldn't grab your attention: White space divided into rectangular modules showing pie charts and bar charts in a kind of muted neon colour palette that calls to mind an old version of Excel, not a revolutionary piece of tech.

But in a business environment where big data is king, that's exactly how North Texas-based Sapience Analytics pitches its product.

Executives who showed off the company's “people analytics” platform on a recent morning say it's a paradigm-shifting way for white collar employers and employees alike to boost productivity by tracking how much time workers actually spend working – like a Fitbit for your job, only your bosses are using your results to evaluate you.

And they're betting that major employers will see dollar signs, no matter how the interface looks.

“We really think we're at the forefront of what's going to be a multibillion dollar industry,” Sapience CEO Brad Killinger said. 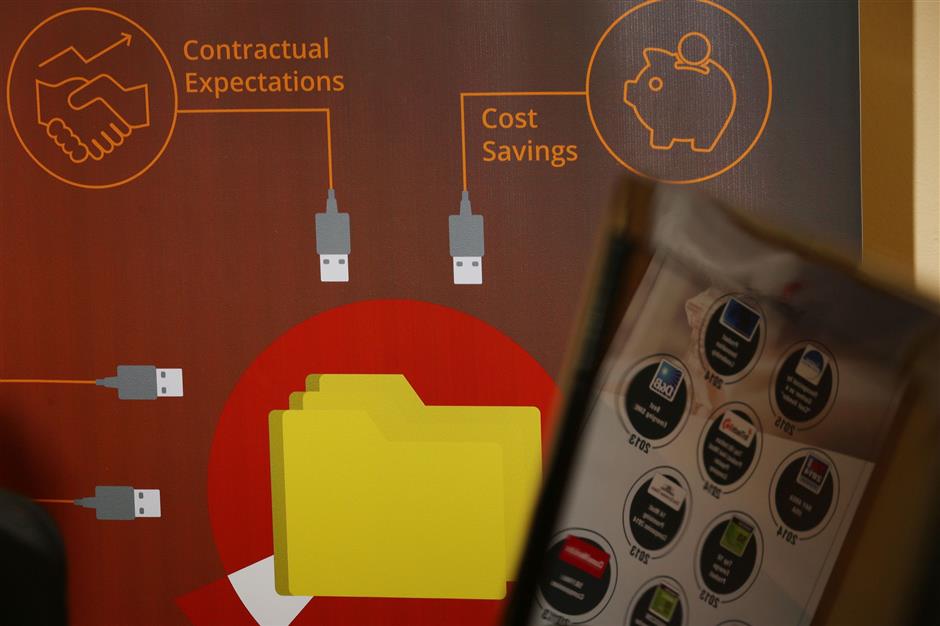 Advertising is displayed inside the temporary offices of Sapience Analytics. Sapience is a platform that allows companies and workforces to view analytics and data on workforce productivity.

Over the last year, Dallas-Fort Worth alone has added 26,800 jobs in financial activities and professional and business services, adding up to a total of almost a million people working in those sectors, Bureau of Labour Statistics data shows.

Sapience, buoyed by an investment by the financial giant Credit Suisse, recently moved its headquarters from India to the US in hopes of tapping into that exploding corporate market.

Still, the seemingly inevitable growth of a business that quantifies the kind of work that has historically been subject to human judgment raises broader questions about the future of people in an automated world.

Are workers really more productive if they know their worth is measured largely in data points? And, on the flipside, if their work is too easily quantifiable, how soon will robots be able to do their jobs?

“The number is motivating,” said Tara S. Behrend, an associate professor of industrial-organisational psychology at George Washington University. “But the number only motivates the exact thing that it's meant to count.”

'Where does my time go?'

On a desktop monitor, Sapience global marketing vice-president Khiv Singh clicked around a page of what the company calls its work Buddy tool.

“That doesn't mean I had a 13 hour or 14 hour day – I actually only worked four hours and 11 minutes in that,” he said, showing how he could pinpoint exactly how much of that was spent on corporate work, marketing activities, phone calls and meetings.

“I spend one hour and one minute on doing marketing activities, I spent around two hours on corporate.”

The platform doesn't require input from employees; it works “passively”, Singh explained, in the background, logging how long workers spend in various computer applications that are core for their job, like CRM programs, or how long they spend on phone calls.

Killinger talked about the benefits for employees: Monitoring can build trust for workers who would prefer to work from home. Hard data showing a worker's output can level the playing field for employees who may be less vocal about their accomplishments when it comes time to distribute bonuses or promotions.

When employees work on their days off, a good manager might tell them to break that habit so they don't burn out.

Singh also showed off a “Work Yoga” function where employees can set productivity goals for themselves, like they might with a fitness tracker, and they can post their successes on social media.

Ultimately, though, the Sapience Buddy differs from a fitness tracker in one fundamental way: Self-improvement is an important but secondary selling point. 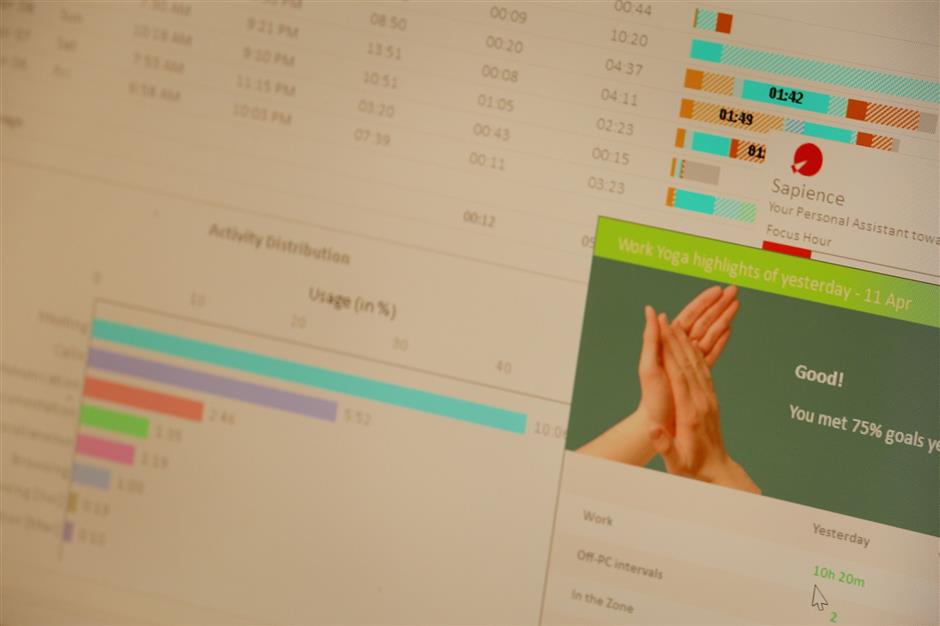 The platform display is seen while doing a product demonstration inside the temporary offices of Sapience Analytics in Frisco.

Managers can choose to use individual or aggregate time data correlated with output to assess a team's work. They can use Work Yoga to challenge employees to compete against one another in order to spur a surge in productivity.

And many of Sapience's core customers are companies that have outsourced services.

If a company sends, say, 2,000 jobs offshore to India, “outside of them getting the bill every two weeks, they don't really know what happens”, Killinger said. Sapience changes that.

When employees demonstrate they're productive even when they're telecommuting, companies can save costs on a smaller real estate footprint.

Killinger said most employees and high level supervisors say they like what he described as a new level of data-driven transparency in the workplace.

“The top 20% love this, the middle is fine because they want to improve,” he said. “And the bottom 20 – well, they were never going to be saved anyway.”

David Antony, the Princeton, New Jersey-based CEO of the outsourcing firm Flatworld Solutions said about 300 of the company's 2,000 employees have been on Sapience platforms for a couple years.

“Initially employees were not too comfortable with it, because it felt like Big Brother looking over your shoulder,” he said. “But they quickly realised it was a tool they could use themselves.”

He said Sapience worked well for the company because it allowed Flatworld to measure different things, depending on the team.

And in any case, Killinger said, human workers will have to make the case for themselves from a productivity standpoint in the not-so-distant future.

“Because the competition is probably not the person interviewing down the street,” he said. “It's theoretical, with the robots.”

The idea behind Sapience's technology is straightforward enough: Take the power to analyse massive amounts of data and apply it to companies' biggest operating cost.

That, for companies that don't manufacture things, is almost always people.

“Almost every company we work with, they still do all their budgeting forecasts and planning based on manual interpretations – what they've done, what they feel like they're doing during the day,” Killinger said. “It's highly inefficient and inaccurate.”

Sapience was started by developers in India in 2009. Last year, the company caught the eye of Credit Suisse Asset Management's NEXT Investors fund as a tech solution for the financial services industry in particular.

The exact terms of the Sapience deal were not disclosed, but Killinger said Credit Suisse acquired 65% ownership of the company for “eight figures”.

The company's founders are still involved, Killinger said. An energetic former executive at companies including IBM and Oracle, he was brought on as president and CEO earlier this year to jumpstart the US expansion.

While, initially, the company set up shop in New Jersey, Killinger had a better idea – a cheaper idea that would also put Sapience smack dab in the heart of its potential customer base.

He moved the headquarters to Dallas-Fort Worth, which has become a destination for corporations moving from expensive coastal markets.

The North Texas team works out of a small suite of bare offices in a coworking space just across a manicured green from Frisco's public library – for now.

Sapience just signed a lease on a roughly 4,000 square foot office in Plano's booming Legacy area. The company has about 24 employees in North Texas, a handful of sales people scattered around the country, and 55 in India, where executives plan to hire another roughly 30 people by year's end.

Sapience says it has 85 customers around the world and partnerships with companies like Salesforce, which lists the Sapience People Analytics @ Work platform on its enterprise app exchange for US$200 (RM794) per year.

The company recently announced it's launching a new work-from-home platform.

Killinger said they expect to hit US$20mil (RM79.57mil) in revenue within two years.

The 'Fitbit on the Dog' conundrum

For observers of D-FW's corporate labour market, Sapience's products fit seamlessly with moves to optimise everything, from end-of-month accounting processes to legal documentation.

The debates have become whether that means hiring nimble talent or finding products that can do things automatically. Tasks that once took days today now take minutes. But now, companies need more skilled people to manage the computers doing that work.

“We're not seeing a decline in demand for headcount at all, it's just shifting in the roles,” said Nicole Sims, a Dallas-based regional vice president for the recruiting firm Robert Half. “This RPA development position is a brand new thing that we didn't have even a year ago.”

Mike Davis, an economist with SMU's Cox School of Business, said that as technology disrupts industries around the world, products that boost efficiency will be critical for keeping any workforce competitive – both against workers in other countries or machines.

The problem, he said, is that more and more jobs seem to fall into a grey area where measuring productivity has been tough.

“An accountant is certainly doing a job that's hugely more complicated than putting lug nuts on a Volkswagen – they're not creating an opera,” he said. “This strikes me as a classic problem: Do you want to measure inputs or outputs?”

Behrend, the George Washington University professor, cautioned that while it's tempting to see data analysis as a kind of saviour for companies that want to get more done for less, “human behaviour is complicated”.

She used Fitbit as an example. When people can see competitors – even friendly ones, or themselves – on a leaderboard, they go to sometimes unproductive lengths to increase their standing.

“I know people who attach the Fitbit to their dog,” she said.

Behrend added that the mere act of surveilling employees can affect productivity. In 2013, she co-authored a report in the Journal of Business Psychology that found when workers feel their autonomy is threatened, they may become less willing to try out or help their colleagues.

Behrend said that although she wasn't familiar with Sapience's products, giving employees access to their own data as a self-improvement tool sounds like a positive step.

But in the end, she said, “I have to know in the back of my mind that this data is probably going to be used to replace me.” — The Dallas Morning News/Tribune News Service