Towers and cameras, not a wall, keep migrants from crossing the border into Arizona

NOGALES, Arizona: In the high desert east of this border town, the rolling hills topped with mesquite and palo verde trees are a picture of rugged desolation.

But there are flashes of movement: Darting between bushes are five migrants who just crossed into Arizona, not far from a road where they could hop into a car to continue their journey.

Not one US Border Patrol agent is within sight. But the group is about to be spotted anyway, and their entry thwarted.

From a hilltop tower miles away, a camera scans miles of terrain – providing a clear view for an agent sitting in front of a computer monitor in a darkened control room.

The operator swivels the camera to find the group hiding behind a tree. Moments later, they give up.

“That's the last I saw of them,” said the operator, whose identity was not disclosed for security reasons. "They ran back into Mexico.”

In the statistical score book of border enforcement, the retreat of the migrants is considered a win – one that did not involve a physical barrier, much less a 30-foot wall. 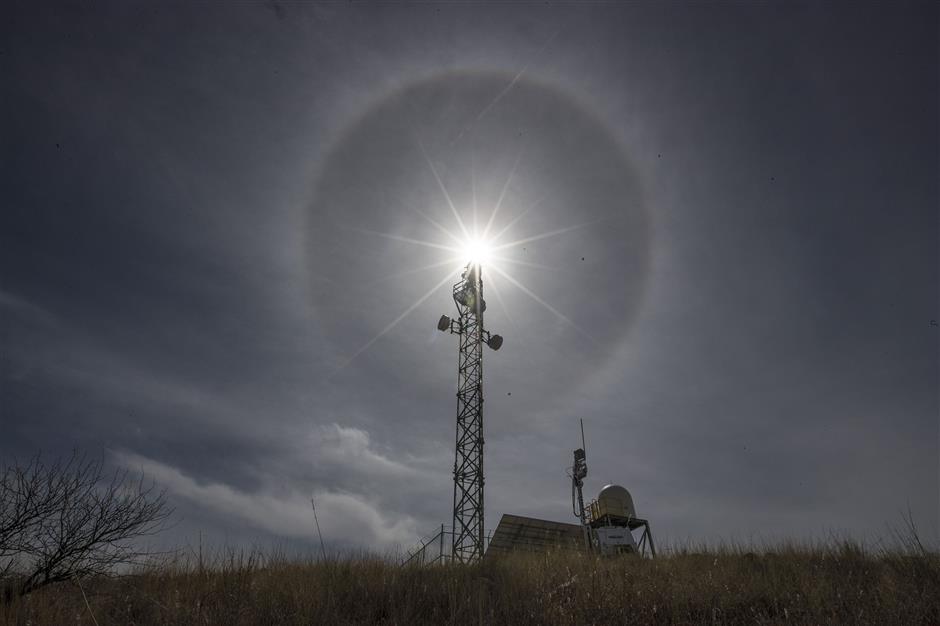 Towers and equipment for the US Border Patrol's Integrated Fixed Towers on a rural property near Nogales, Arizona. — Los Angeles Times/TNS

What blocked their path was a surveillance tower brimming with high-technology cameras and radar systems. When the camera focused on the group, a binoculars-wielding smuggler lookout in Mexico noticed and by cellphone directed the migrants to evade arrest by returning to Mexico.

Across much of the Arizona-Mexico border, authorities in recent years have erected 23 so-called Integrated Fixed Towers as part of the latest – and largely unnoticed – attempt to create a border enforcement system more space age than medieval.

Installed mostly on hilltops in rural areas, the 80- to 180-foot towers – each outfitted with radar and a pair of night and day cameras – can scan hundreds of square miles of rugged terrain.

A similar effort failed a decade ago, but the agency, aided by security consultants and evolving technology, has continued experimenting and testing the system.

Agents and experts now say it is effective enough to expand to other remote border areas with flat or rolling terrain. And progress has also been made with other surveillance systems better adapted to cities and areas with dense vegetation. They include mobile camera systems mounted on trucks and remotely operated cameras perched atop towers in urban areas.

But the technology-driven approach is a low priority in an era of enforcement policy driven by tough rhetoric and raw symbolism.

President Donald Trump has focused his strategy on a “giant” wall that he says would stop migrants and drugs from crossing the border. The administration's budget request for 2019 included US$1.6bil (RM6.21bil) for wall funding, compared with US$200mil (RM777.26mil) for technology improvements.

Critics and agents alike have questioned the imbalance. In an effort to nudge the debate toward other approaches, US Senate Democrats from the Committee on Homeland Security and Governmental Affairs released a report in March that made the case for more technology, saying surveys show that agents rarely cite fencing as a solution.

“This report reinforces what I've heard from frontline border agents and (Customs and Border Protection) leaders alike, that the top priorities for addressing vulnerabilities along our border are additional personnel and better technology,” said Sen. Claire McCaskill, D-Mo.

At a Senate hearing last April, David Aguilar, the former acting commissioner of Customs and Border Protection, said technology is the “highest” need of the Border Patrol. “It gives you situational awareness, it gives you intelligence ... and it gives you the capability to respond in an effective and in a safe manner.”

A “virtual” border first evolved during the administration of President George W. Bush. Unveiled with great fanfare in 2006, the plan, called the Secure Border Initiative Network, envisioned a network of radar and camera towers linked to ground sensors that would provide constant surveillance and the ability to coordinate with Border Patrol agents on the ground to interdict crossers.

But the US$1bil (RM3.88bil) programme – plagued by performance snags and cost overruns – was halted in 2011. Research continued at lower funding levels, and by 2015 the new systems, designed by Elbit Systems of America, the Fort Worth-based subsidiary of Israel's Elbit Systems, started going up.

The improvements have been groundbreaking, according to experts and agents, some of whom have traveled to Israel to study the system.

The new-generation radar can distinguish between people and other motion triggers, such as cows and even branches rustling in the wind. 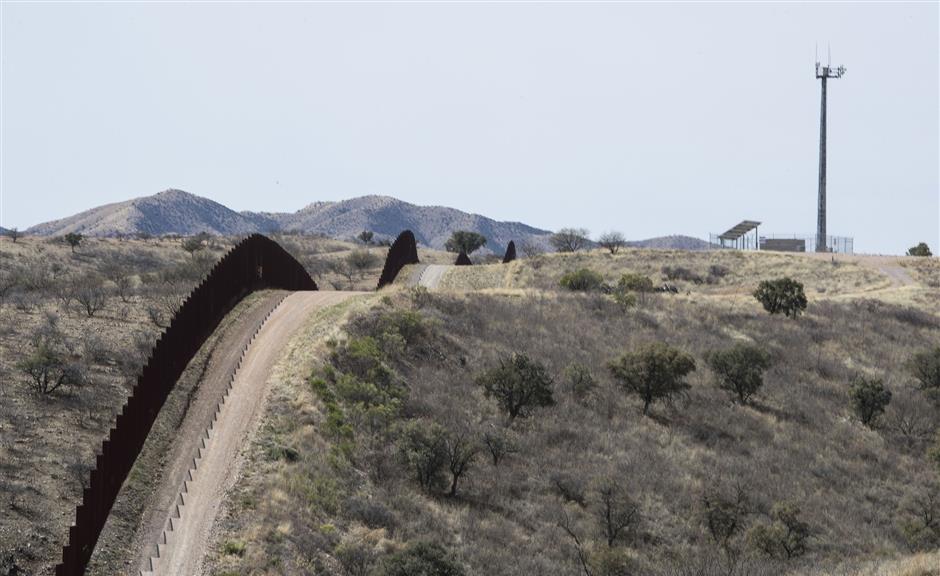 A fence along the US Mexican border west of Nogales, Arizona. — Los Angeles Times/TNS

That's a key upgrade because it clears up the clutter of alerts on monitors, which makes it easier for operators to focus on smuggling operations.

Operators also no longer have to pan the landscape to spot people; a double-click on the screen automatically points the camera toward any movement or tripped ground sensor.

Nowhere is the rapid evolution more evident than in the control room of the Nogales Border Patrol station, which is among the most technologically advanced along the border.

Teams of up to seven agents keep watch of 50 live video feeds from dozens of cameras. Some cameras are part of a separate, slimmed-down surveillance system that monitors activity in urban areas such as downtown Nogales.

Abuzz with beeps, flashing screens and a disembodied female voice that fills the room with every border intrusion – “Alert One”, the voice announces – the room takes on the feel of a real-life video game, as operators scan the icon-filled screens while steering agents on the ground to intercept migrants.

“He's in the wash right now,” an operator informs an agent who can be heard breathing hard as he runs to arrest a suspected border crosser.

“Alert Five”, the voice announces moments later, prompting another operator to direct his camera toward a sensor that has been tripped east of town.

Another agent, meanwhile, focuses a camera on a hilltop just across the border in Mexico, where a lookout with binoculars is helping navigate migrants through the Border Patrol obstacle course.

Concerns about privacy – the cameras are so powerful they can zoom into windows and cars in Mexico and the US – prompted some protests in earlier years, but few recently.

In the town of Arivaca about 10 miles north of the border, where a tower looms off the main road outside town, some residents credit the round-the-clock surveillance with the dramatic reduction in illegal activity.

Beth Lusby, a 78-year-old retired court bailiff who described herself as pro-Border Patrol, said the tower, along with highway checkpoints, are preferable enforcement options over an “ugly” wall.

“We don't have problems with the tower,” she said. “We have to give up a little of our freedom to maintain it.”

One day last month when Times journalists visited, operators assisted in many of the 17 arrests of suspected crossers and a vehicle pursuit through the morning and early afternoon.

“This is 1,000 times better,” said an operator who worked on previous generations of the system. “We can see areas we couldn't see before. It's a lot more user friendly.”

But the surveillance remains patchy.

When the operator tries to focus on another group that has crossed the border, he can't find them because they have slipped below the ridgeline beyond the view of his camera.

It's a common problem: Migrants tuck themselves inside gullies and dips in the terrain for hours at a time. And because there's no tower with adequate camera coverage on the other side of the ridge, the operator struggles.

“That's why we need two (towers), one on each side,” the operator said. — Los Angeles Times/Tribune News Service