Wearable technology could save lives and dollars in construction industry 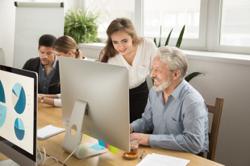 Sole Power shoes harnesses the kinetic energy from walking to charge batteries and power electronic devices, including lights on industrial boots ,Tuesday, May 2, 2017, at the Tech Shop in East Liberty, Pittsburgh. Sole Power is developing a self-charging industrial workboot that helps workers be safer and more productive, according to Hahna Alexander, CEO and co-founder. (Rebecca Droke/Post-Gazette)

The Pittsburgh-based startup has gone through at least 20 other iterations of the boot, and this one took about six months to create. The footwear looks normal – all black save for the company's white and green logo.

But after a few steps, rectangular sections in the heels illuminate a bright orange, reminiscent of the lights inside a traffic tunnel. That's when you know they're charging.

To tackle ongoing issues in the industrial work space, SolePower – which has won various awards, including a spot on Popular Science's 2014 Invention Awards list for its proprietary self-charging shoe sole – has switched gears to create the first "self-charging, industrial wearable," according to Cindy Kerr, commercial director.

This unplugged technology could play a role in efforts to improve safety and efficiency in the building, construction, and oil and gas industries, according to Kerr.

It could also become part of the ongoing debate over privacy issues, as employers and technology converge to more closely track what workers are doing and where they are going.

Inside the SolePower boots are a variety of sensors, including those for temperature detection, GPS, WiFi, electronics and inertial measurement units, which track location and motion. Each is powered by a kinetic charger that harnesses the untapped energy produced by walking.

"These are things we normally take for granted in a smartphone," said Hahna Alexander, co-founder and CEO of SolePower, which was founded in 2012 and has five employees.

A growing number of industrial devices are equipped with safety indicators – such as equipment producer Cat's Link technology, which allows a company to track its fleet of backhoes, excavators or compactors – but the SolePower gear is a wearable, joining the ranks of smart helmets, vests, glasses and even bionic suits.

There's a potentially sizable market to capture. Construction, for example, is one of the least digitized sectors in the world, according to research from The McKinsey Global Institute.

In a report released earlier this year, the institute estimated the world will need to spend US$57tril (RM244.70tril) on infrastructure by 2030 to keep up with global GDP growth. In the construction sector, even a fraction of a percentage change in productivity could equate to substantial savings.

It's challenging to track workflow on job sites, so inefficiencies can go unnoticed, Kerr said. "We need to know who is on the site and where they are at any given time ... you can't actually improve efficiency if you don't measure."

Chad Hollingsworth, president and co-founder of Norwalk, Conn.-based safety and communications company Triax Technologies, agreed that manual tracking on a clipboard is ineffective. "Most of these job sites can't tell you how many workers they have or where they are," he said.

Fatal injuries in construction, which is among the most dangerous professions in the world, rose by 2% to 924 cases in 2015 – the highest level since 2008, according to the 2015 National Census of Fatal Occupational Injuries report by the Bureau of Labor Statistics.

"They all have stories from the job sites, and some are horrific," Hollingsworth said. "One fell down an elevator shaft and no one found him until they smelled him ... they're working in the most dangerous industry and they do want tools to keep safe."

Triax is selling a network safety device called spot-r, which is about the size of a pack of chewing gum and easily fastens to a belt.

Inside spot-r, a small sensor tracks workers' movement, indicating when slips and falls occur. There is a button workers can press to point out a safety concern – whether that's a hazardous spot in the field or an incident that occurred.

This form of tracking, though, can be controversial. Consumers and workers alike have pushed back against wearable sensors due to potential privacy infringement.

In a 2014 study, accounting and consulting firm PwC surveyed consumers on the future of wearable technology, with a focus on workplace applications. The study found a high volume of respondents felt wary about privacy and security – 82% were concerned that wearable tech would invade their privacy and 86 percent were concerned that it would make them more vulnerable to security breaches.

Donny Beaver, co-founder and CEO of HalenHardy, a Pennsylvania firm that invents safety tools for the industrial outdoor workforce, expressed some doubt that construction workers would embrace technology like SolePower's connected work boot.

"Anybody who really gravitates to that type of work has a bit of an independent spirit," he said. "Culturally, it's a huge difference from someone who is looking for an air-conditioned office.

"I don't know what they're finding so far with worker compliance, but unless you present it to them in a way that can really show them their job is going to be easier ... I think there may be some pushback on the 'Big Brother is Watching You' thing."

Beaver recalled working with oil and gas workers in Western Pennsylvania four years ago. His team put GoPro cameras on workers' helmets to watch what they were seeing and affixed air monitors to the workers to gauge air quality.

"Most of the guys saw it as extremely intrusive ... the project never took off, although we thought we were helping them stay away from silica dust," Beaver said.

At Triax, that problem is already being engineered out of the system. After finding it was nearly impossible to get workers to wear devices with GPS tracking, the team developed a closed, secure network that is set up on site.

Though SolePower uses GPS tracking, it has an advantage when it comes to battery life – the boots never die, while Triax wearers must replace the battery in their device annually.

And, for construction workers who must currently pay for their own work boots, an employer-subsidized pair that keeps them safe may look like an attractive option.

Currently, SolePower's business model consists of an initial fee for the boots, which should compare to the price of a high quality work boot, Kerr said.

While Kerr did not give an exact price for the SolePower boot, a pair of Timberland work boots cost anywhere from US$145 (RM622) to US$200 (RM858), on average. Wolverine's line of Legend Durashocks soft toe work boots cost US$160 (RM686), comparatively.

There's also a monthly subscription charge for data services through an online dashboard.

Triax uses a lease and service model wherein the cost of the system is absorbed into the cost of a job by listing spot-r as a safety fee.

How successful the new technology is depends on convincing the employees that the new gear is worth it, Hollingsworth said.

"You have to show workers that first and foremost this is a safety device." — Pittsburgh Post-Gazette/Tribune News Service