Smartphone pollution: How sustainable is the mobile phone industry?

Toxic trash: Market researchers estimate that since the introduction of the first iPhone ten years ago, more than seven billion smartphones have been produced and many of them have since ended up in the dump.

The smartphone and tablet market is a multi-billion dollar business in which companies compete hard to win customers. That’s good for the consumer but what's often overlooked is the environmental cost.

"With their short-lived devices and unnecessarily fast product cycles, the manufacturers are causing massive environmental damage and catastrophic working conditions," Manfred Santen, an electronics expert with Greenpeace, said at the recent Mobile World Congress in Barcelona.

Market researchers estimate that since the introduction of the first iPhone ten years ago, more than seven billion smartphones have been produced and many of them have since ended up in the dump.

Santen appealed to Samsung, Apple, Huawei and the other manufacturers to build products that can be repaired more easily and which have internal modules that are easier to change. "Every repaired smartphone saves resources,” he said.

What makes smartphone production so problematic, environmentally-speaking? One reason is that they require precious metals and so-called rare earths which are processed using harmful chemicals.

In addition, the hunt for ever-increasing amounts of raw materials causes massive damage and may lead to some resources being exhausted.

On top of that comes the massive energy expenditure. According to Greenpeace, over the past ten years smartphone production has used up 968 terawatt hours of electricity worldwide, matching the annual energy supply of India.

"In the face of this, you should really think about whether you need a contract that gives you a new mobile phone every year," Santen said.

Some companies such as Puzzlephone or Fairphone follow a more sustainable strategy.

“In the Congo people are risking their lives in mines to get minerals so that users can constantly get newer and thinner smartphones,” said Fairphone founder Bas van Abel. “We asked ourselves: How can you make a smartphone with which you can change something?”

The Dutch company produces devices with interchangeable modules that are easy to repair. To date it has sold more than 125,000 phones.

“The greatest environmental impact comes from the production phase of the telephone, especially the production of printed circuit boards and semiconductors,” said Karsten Schischke from the Fraunhofer Society in Germany. “The battery, the display and the back cover, on the other hand, have a smaller impact.”

Experts believe that if the life of a phone were increased to five years, then the impact on global warming could be reduced by 30% thanks to the carbon dioxide saved. In reality, devices have a much shorter service life and that’s down to trend-chasing consumers as much as it is to the manufacturers.

Another problem is recycling. "Companies should be obliged to take back and recycle damaged smartphones unconditionally," said Greenpeace’s Santen.

The amount of electronic waste is enormous. According to the University of the United Nations, the quantity of electronic waste per person in the US in 2014 was 22.1kgs. At the same time, the design of devices with patented screws and glued-in batteries can make recycling difficult.

Santen sees some hopes for improvement. Apple, for example, has made significant progress in environmental protection over the last few years.

But then on the other hand there’s Samsung which has had to recall millions of its Galaxy Note 7 smartphones because of a fire hazard. "A convincing plan for their disposal or recycling has still not been presented," Santen said. —  dpa 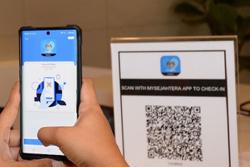