Digital drive: The aim of this initiative is to make internal financial processes faster, simpler and more secure.

FRANKFURT:  Deutsche Bank opened a centre for software developers and IT and financial specialists in Frankfurt, joining other lenders in developing products for digital banking.

Germany's biggest lender said the so-called digital factory brought together 400 technology and financial professionals from 14 countries. It plans to double staffing to 800 by 2018.

The aim of digital factories is to make internal financial processes faster, simpler and more secure, as well as to meet rising customer demand for products such as more flexible mobile payments and banking options.

"We don't want to be driven by digitalisation; we want to be in the driver's seat," said Christian Sewing, Deutsche Bank's board member responsible for the endeavour.

The lender, which has similar tech centres in New York, London and Berlin, plans to invest 750mil euros (RM3.4bil) in the effort through 2020, including 200mil euros (RM465) in this year alone.

The bank is facing myriad problems, including fighting a US$14bil (RM57.9bil) demand from the US Department of Justice to settle claims it missold mortgage-backed securities, a shock bill that has raised questions about the lender's future.

A number of financial technology centres have opened in Frankfurt in recent months, including by Commerzbank and Deutsche Boerse. —  Reuters 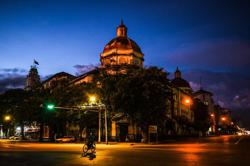