Rural folk ring in the profits with their mobiles

Handy income: Nooratikah and her husband Kamarulzaman made their handicraft in Kampung Sungai Satan,Jeli and sold it via word of mouth for three years. The couple now make five times as much, since creating a Business Facebook page .

In the outskirts of Malaysia, budding entrepreneurs are used to selling their products from door to door or at night markets.

But with the advent of the Internet, in particular mobile Internet, their world has opened up. By connecting to Facebook, they are now able to sell to the entire nation, without leaving the comfort and serenity of their homes.

These rural folk see the smartphone as much more than a social device – it has become a vital tool in peddling their products online.

With wired Internet connections in far-flung areas rare and satellite technology too costly to implement, it is their only way to connect to the Internet to do business, selling everything from handicraft to pau.

And with the advent of social media, a bewildering array of data analytics tools and a rapidly evolving e-commerce scene, rural people just needed a small boost to get in on the action.

Seeing this, the Government is ­striving to empower the people with Internet connectivity. Thus the latest initiative, a pilot programme called e-usahawan by Multimedia Development Corporation (MDeC), is geared at Malaysians who want to become Internet entrepreneurs.

MDeC youth division director Sumitra Nair said that with Google and Facebook, “market research is now in the hands of the individual.”

“If you consider the tremendous growth in smartphone ownership, the high penetration of social media, the fact that 75% of Malaysian youth (aged 15-24) are digital natives and also the various broadband initiatives by the Government, we have a conducive environment for more Malaysians to jump onto the online business ­bandwagon,” said Sumitra, who added that the course is also taught as a ­subject in vocational schools but is compressed into two weekends for working adults.

e-usahawan was introduced in the sleepy town of Jeli, Kelantan earlier this year in May.

Among the many to benefit from the programme was one enterprising ­couple, Mohamad Yusni Yusoff, 39 and Marjan Abdul Rahman, 37, who have been selling homemade herbal soap for two years. 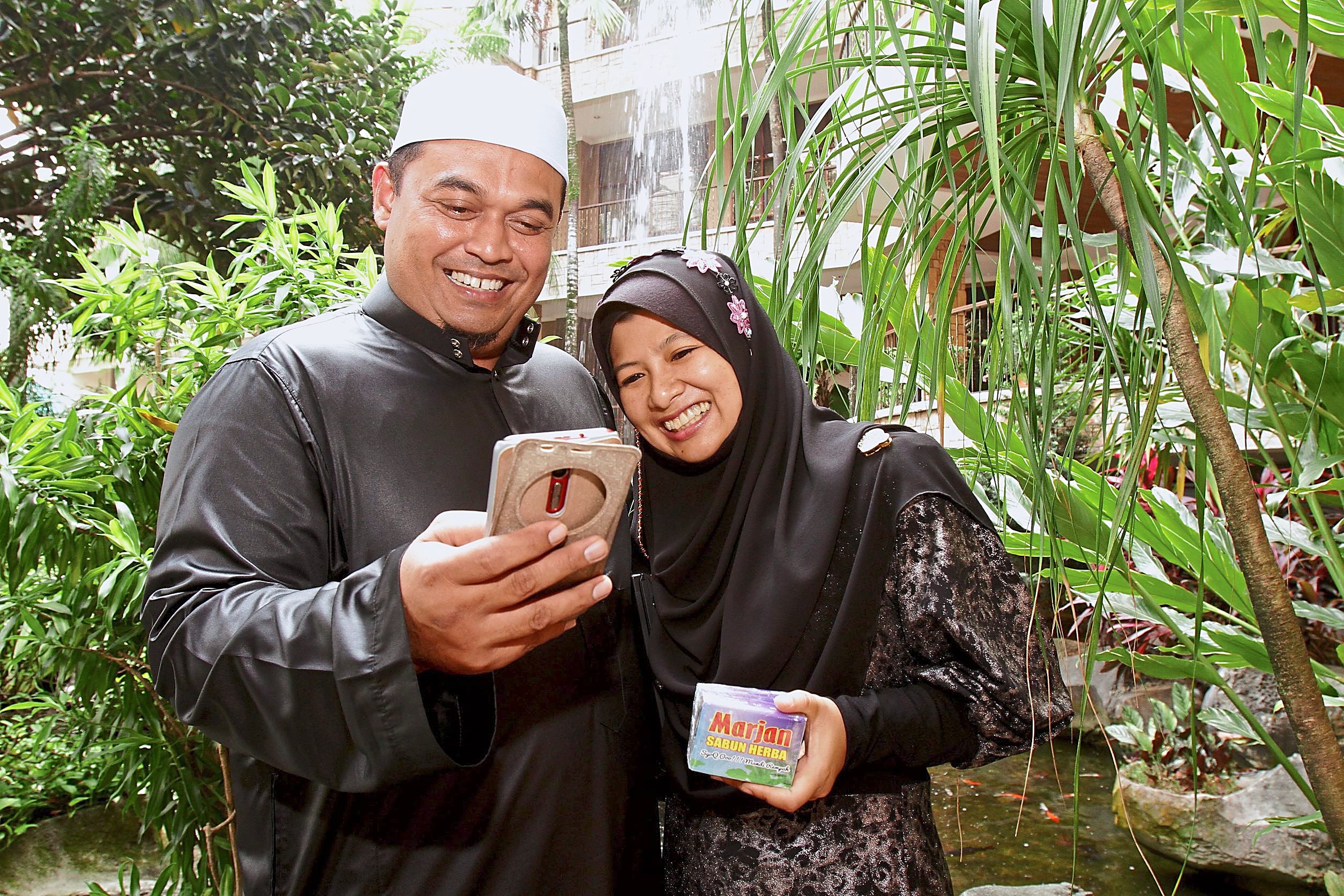 Mohamad Yusni and his wife Marjan had no idea of the sales potential of Facebook until they took the e-usahawan course. — YAP CHEE HONG/The Star

The couple, who have five kids, used to make about RM300 a day hawking their products at restaurant tables. After taking the four-day course on ­setting up a Facebook Business Page, the couple said they can now make more than three times that amount without having to move around as much.

“When we go out, it’s mostly to post something to our buyers,” Mohamad Yusni said.

Sumitra claims that 65% of the 250 participants in the pilot programme are making money.

Most of the participants were aged between 30 and 50.

“It was a free course. There are ­private courses out there but you would have to pay around RM6,000 for courses by Internet entrepreneurs,” enthused Mohamad Yusni, looking like the cat who ate the canary.

He said that the teachers are actually people who have started their own online businesses and therefore have real world experience to impart.

Wan Nong Muzaffar, who himself has Muslimah clothes and pet supplies businesses online, taught the course in Jeli.

He says that Facebook Ads makes a lot of difference when marketing as it’s less expensive and more targeted than traditional media.

Mohamad Yusni said that the biggest benefit of the course was setting up his own Facebook Business Page and then learning how to boost his Facebook posts.

He wasn’t aware of the potential of Facebook’s dedicated business pages when they were launched in 2009.

Neither was he aware of the impact of Facebook’s “Promote Posts” button in 2012, which turned into “Boost Posts” in 2013.

When he attended the course, he found he could direct his posts at specific races, genders and age groups. Before the course, Mohamad Yusni only had a personal Facebook page and just blasted posts about his business to a few thousand of his friends.

Now, he can blast posts of new products out to 6,000 people for as little as RM30 and he can target his customers by way of location, race and gender.

“It’s the modern way of putting ­flyers in people’s postboxes, but these flyers don’t get wet in the rain,” he quipped in Malay.

He also learnt how to promote his Marjan Sabun Herbal Ori Business page, mainly by using the Promote Your Page feature, which usually ­translates into more page likes, and the Boost Posts function for specific posts.

After only a few months, it has close to 700 likes, and about 10% of them have become paying customers, he claimed.

Besides Facebook, participants were also taught to use Google Trends, which Mohamad Yusni utilises to ­target his product to customers.

He claims his homemade herbal soap can remedy skin problems – like shingles and ringworm – and even dandruff, so he uses Google Trends to identify which parts of the country have people with those specific problems.

Mohamad Yusni said that this helps him to target people outside his home state. “I now have customers all over the country,” he said. 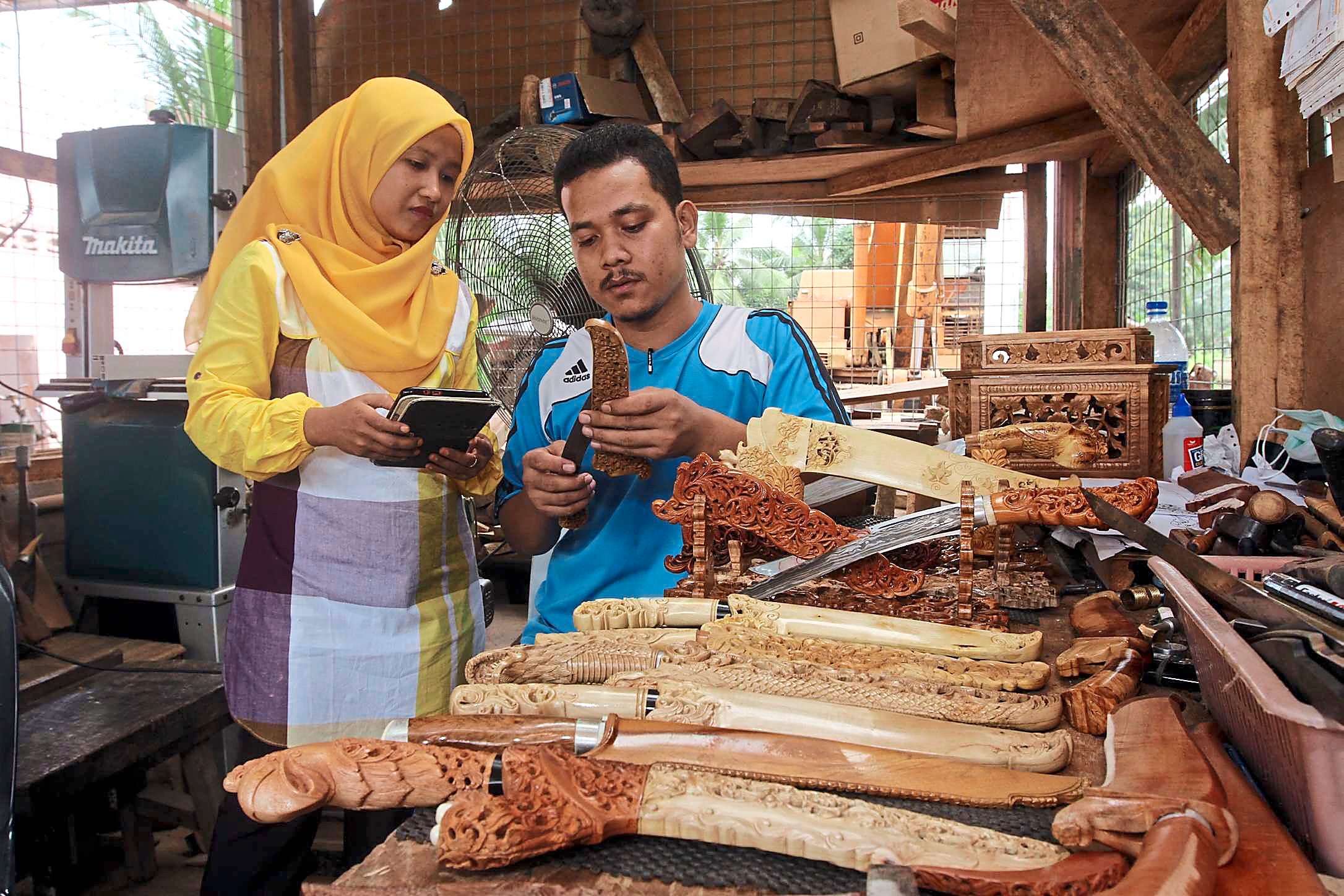 Nooratikah and Kamarulzaman have gone from making a few hundred ringgit from handcrafted keris in one month to a few thousand. — ZABIDI TUSIN/The Star


Another of the e-usahawan course attendees, Nooratikah Rohazid, 27, used to rely on her sundry shop business for a living.

Her husband Nik Kamarulzaman made a few hundred ringgit on the side with handcrafted keris that he sold through word of mouth.

But after the course, the couple set up the Facebook page Yo Craft Professional Services and in just a short time began making RM5,000 a month.

“Besides how to target customers, the course taught us how to ­communicate with them ­properly online and not just give pricing details. Now we have ­customers from all over and not just our kampung,” said Nooratikah.

She was taught to ask potential ­customers questions in order to get to know them and their needs better, for example, what keris designs the ­customers prefer.

Nurul Hafizah Abdullah, 28, also attended the two-weekend course. She had been selling frozen food that includes roti canai, curry puffs and akok, a traditional kuih, for the past 10 years. Her orders have doubled since taking the course where she learnt to set up her foodmarket.my Facebook page.

After setting up the Facebook page, Nurul got a major client who supplies food to three asrama (boarding schools) in Tanah Merah and Gua Musang, Kelantan. 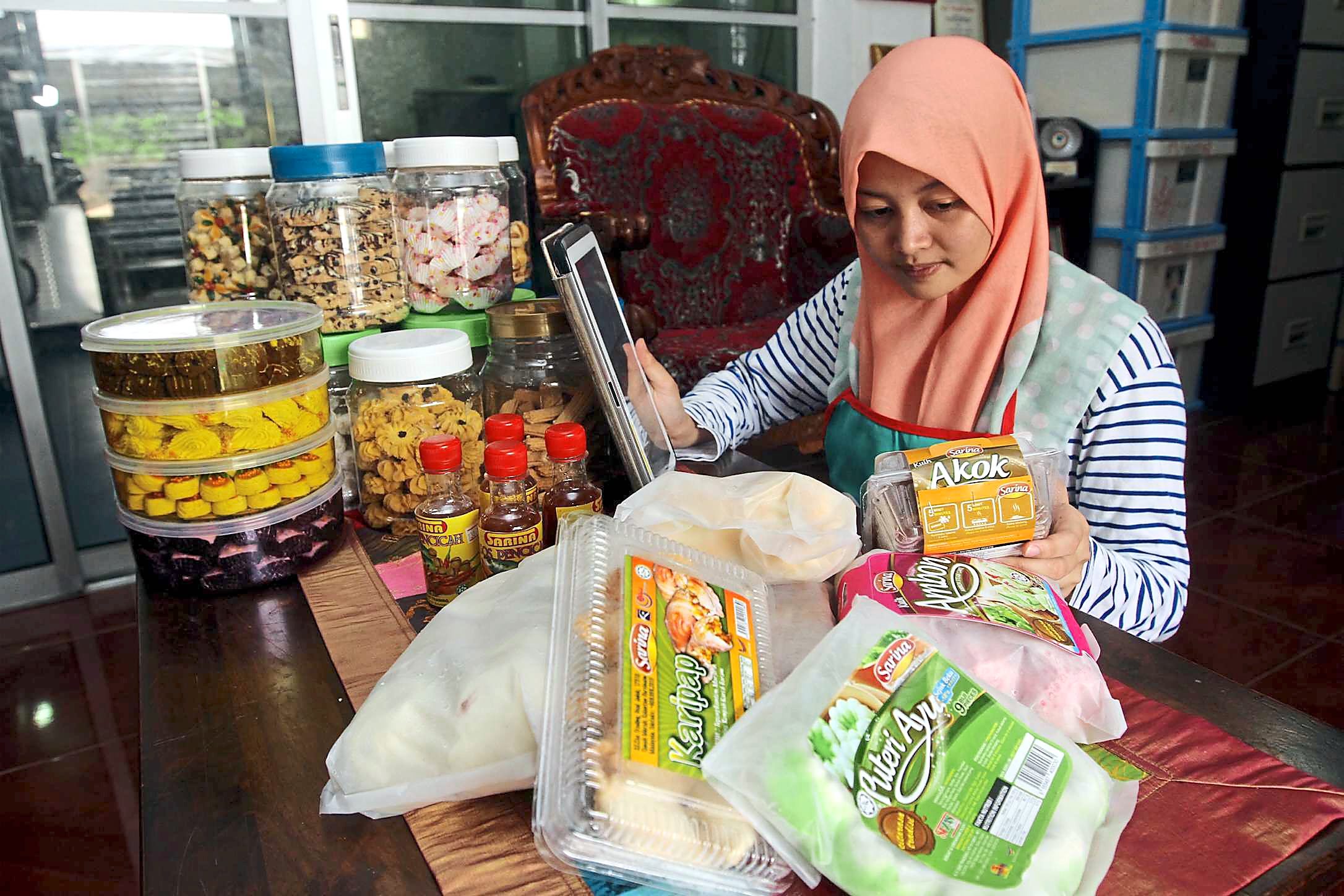 Nurul Hafizah is warming up to e-commerce by selling frozen food that includes the traditional kuih akok. — ZABIDI TUSIN/The Star

But e-commerce wasn’t always about whipping out your smartphone and connecting to Facebook, especially in the outskirts of Malaysia.

In fact, most rural folks’ first ICT experience would have been in a telecentre more than a decade ago.

Hakim Mohd Nor, 30, whose family has tapped into the reach of the Internet to to sell pau since 2009, said that things were quite different just a few years ago.

He had to commute to a telecentre daily from his house in Sabak Bernam to connect to the Internet in order to maintain their MusPau blogshop ­storefront and monitor orders.

“It was just a short distance away but it was still a chore to drive there. These days all we have to do is take out our handphones to check for orders and enquiries on our Facebook and Instagram pages,” said Hakim, who is helping with the family business ­started by his mother Musringah Iman, as an alternative to cocoa farming, back in the 1990s.

“It’s a lot easier now, we can just connect to the Internet by phone,” she said.

Back in the early noughties, the Community Communications Development Programme introduced Kedai.Kom, where Internet terminals were installed in sundry shops in rural towns like Rumah King, Pakan, Sarawak; and Kampung Paris I, Kinabatangan, Sabah.

Each centre was equipped with five computers that used satellite connections with wireless broadband access (minimum 384kbps). It cost RM2 per hour to use and was implemented by the Malaysian Communications and Multimedia Commission (MCMC).

There are still 2,000 telecentres in the country today, according to Pikom, the national ICT Association of Malaysia.

Telecentres were what first sowed the seeds of entrepreneurial spirit in rural folk like Musringah’s family, who set up their blogshop storefront on their own and then had to learn how to maintain it – and how to market the product – by trial and error.

After creating the storefront in 2009, she has had customers coming from Perak, which borders Sabak Bernam, and even busloads of people from other ­nearby areas coming to buy her pau after seeing the storefront on the Web.

Since then, sales for Musringah and Hakim’s pau sales have doubled within the last five years.

This programme strove to introduce such tools to the folks in cities like Taiping, Alor Setar, Kulaijaya, Dungun, Kemaman and Tampin but was not taught in ­vocational schools.

It was in collaboration with the International Trade and Industry Ministry, Teraju (the Government’s Bumiputra Agenda Steering Unit), and microcredit organisation Amanah Ikhtiar Malaysia.

The programme trained over 1,500 entrepreneurs and provided six months of online support and advisory services for a thousand businesses. One of the programme participants was Kota Tinggi-based Hamizah Hamdan, 34.

An engineer turned entrepreneur who provides canopy services for ­weddings and other events in Johor, her annual sales increased from RM20,000 to RM60,000 after joining the ­programme in 2011.

There were significant leaps in sales over the next few years. Hamizah said she managed to increase sales four-fold and the number of canopies for rent from four to 30.

There were other initiatives to get the rural entrepreneur online, such as MCMC’s Get Malaysian Business Online initiative where small, local businesses could apply for a RM1,000 grant to get a web presence. However MCMC would not comment on the success of the ­programme.

The e-usahawan pilot initiative is ­possibly the most ambitious plan to ­introduce rural folk to e-commerce to date.

It will be rolled out nationwide at all the local community colleges, followed by the Technical and Vocational Education and Training colleges. College students will get to study e-commerce techniques for two to three hours a week for a ­semester.

“This way, not only do a whole new generation of vocational students get to understand how to use social media for business but rural folk also have a chance to attend a shrink-wrapped version of a longer course being taught for a minimal commitment fee, from RM5 to RM25, as we want to reach as many people as ­possible,” Sumitra said.

She added that MDeC would have a roadshow next year going to ­community centres to promote the programme.

As for the participants, they have ­nothing but praise for the initiative. Nurul in particular believes that what she was taught was only the ­beginning.

“If possible I would like to sell my ­frozen food overseas. The course taught me so much, I wish I had known all this earlier.”

For more information on the e­-­usahawan course, go to www.mdec.my.