Downward trend: The Nikkei says the Japanese electronics company is expected to report a net loss for the last fiscal year.

TOKYO: Toshiba Corp is expected to report a net loss for the last fiscal year and also revise down its fiscal 2011/12 earnings to a loss following an investigation into its accounting practices, the Nikkei business daily reported.

The loss for the fiscal year to March 2015 will come as Toshiba takes 100bil yen (RM3.29bil) in impairment charges to reflect weakness in its Westinghouse nuclear business as well as its semiconductor and appliances units, the Nikkei said, citing unidentified company sources.

The Japanese industrial conglomerate had originally projected a profit of 120bil yen (RM3.93bil) for the last fiscal year, but it withdrew this forecast in May and delayed its earnings announcement pending the investigation.

Toshiba said the Nikkei report was not based on anything it had announced. — Reuters 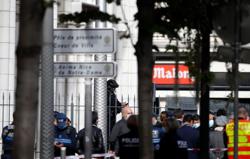