MORE SENSES: Eagleman showing a computer readout as he wears a VEST tailored to expand the range of human senses by translating information into vibrations sent into the backs of wearers during a TED gathering.

VANCOUVER: Neuroscientist David Eagleman hopes that one day a special piece of clothing he has designed will let the deaf "hear" and allow wearers to sense what is happening online without looking at a computer.

Eagleman's so-called VEST, whose name comes from the futuristic-sounding "variable extra-sensory transducer," is a sleeveless top equipped with vibrating nodes that buzz information onto the wearer's back, essentially giving the wearer a new source of information. CLOSE UP: VEST, or variable extra-sensory transducer, is designed to synch to tablet computers which can convert spoken words, stock prices, or other information into digital data sent wirelessly to vibration motors woven into the back of the garments that can be worn discreetly under clothing. – AFP

"Your brain doesn't know or care where it gets the data from," Eagleman said after showing off the VEST at the prestigious TED Conference in Vancouver.

"It is essentially a general purpose computing device."

VEST is designed to sync to tablet computers which can convert spoken words, stock prices, or other information into digital data sent wirelessly to vibration motors woven into the back of the garment that can be worn discreetly under clothing.

"There is a difference between accessing big data and experiencing it," Eagleman said.

"Imagine an astronaut being able to feel the overall health of the International Space Station."

During an on-stage presentation at TED, Eagleman wore a VEST receiving real-time Twitter posts with the event's hashtag along with sound from the audience.

"This is the first time I've felt applause on this vest," he quipped at one point. "It is kind of nice; like a massage." 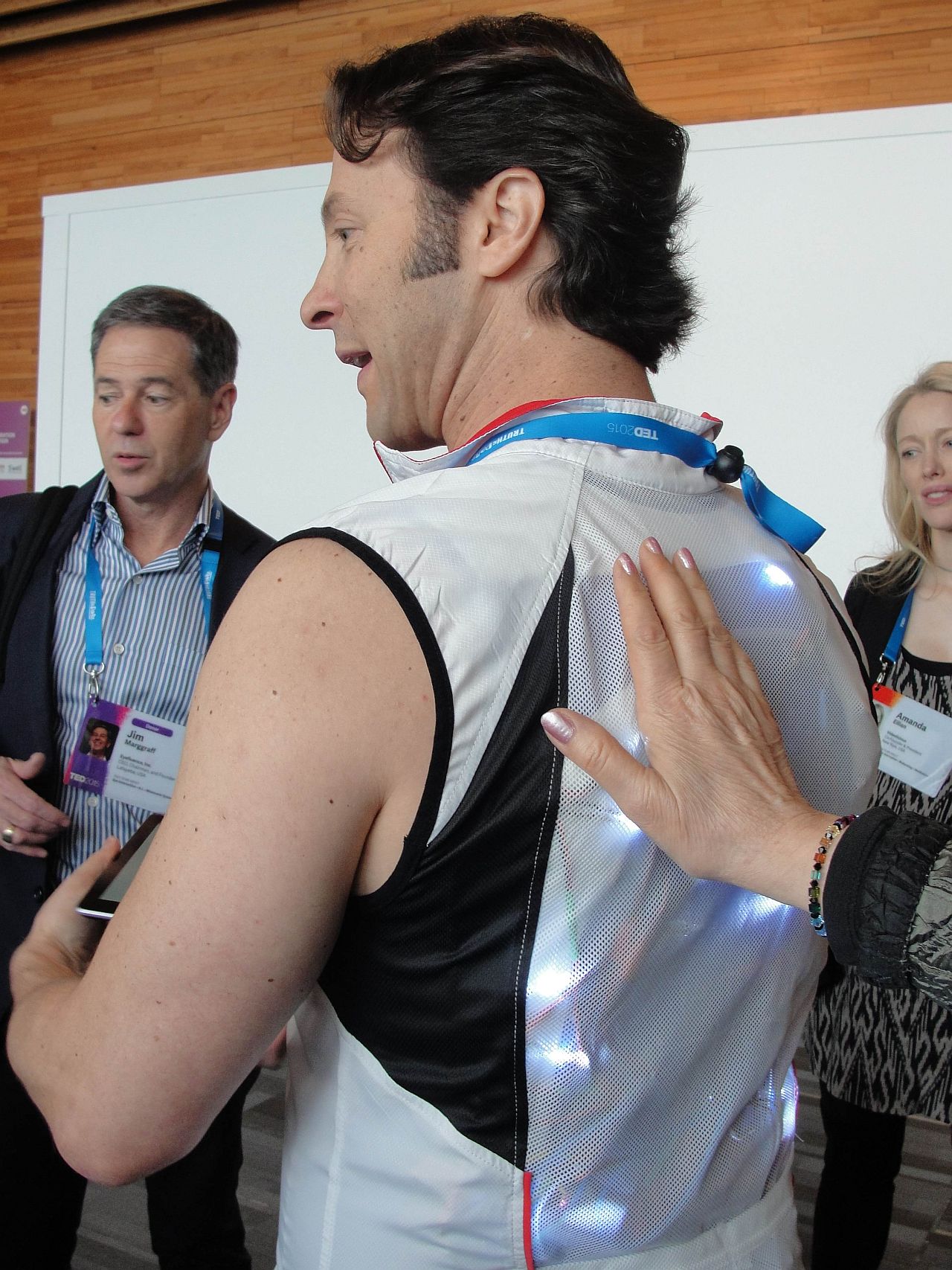 CLOSE UP: Eagleman (pic) is out to broaden human perception with a VEST that could let the deaf hear or let someone sense stock market trends. – AFP

The freshly launched startup behind VEST is taking aim at giving the deaf a way to "hear" by converting spoken words to phonetically balanced vibrations that can be understood similarly to running fingers over Braille.

Testing showed that people quickly begin understanding the language of the vest and can be conversation ready in a matter of weeks, Eagleman said.

"We actually have no idea what the limits are on the kind of data the brain can take in," he said.

"What we do know is that it is extremely flexible; I think there are a lot of applications beyond sensory substitution."

Testing has begun to see whether feeding real-time data from the stock market can give wearers a sense of when it is best to buy or sell shares.

"Trust your gut would become trust your back," Eagleman told AFP.

"You might have a sense that things are kind of weird and oil futures are about to tank or it is time to short a stock."

The startup is also exploring whether pitch, yaw and other data from drones improve flying skills of those remotely controlling them, and envisioning jet cockpits where information from myriad sensors is routed to VESTS worn by pilots.

"People don't have the proper senses," Eagleman said, noting the slim range of light, sound, smell and other senses that humans are capable of detecting.

"As we move into the future, we are going to be increasingly able to choose our own peripheral devices and will no longer have to wait for Mother Nature."

A consumer version of VEST costing less than US$1,000 (RM3,727) is expected to be ready for market within eight months.

Eagleman's on-stage talk intrigued TED attendees, including longtime climate champion and former US vice president Al Gore who was curious about the potential to use VEST garments to let people sense levels of greenhouse gases being released.

"I do think of this as an extra sense," Eagleman said. "Even though it is using touch, it is using it in a different way."

He imagined VEST garments one day letting soldiers sense where allies are on battle fields or even Facebook users feel friends nearby. – AFP