UPCYCLING: Cycling through the streets of Taiwan's capital, staff from a design company turn discarded plastic cups and bottles into pieces of art on the spot with Mobile Fab — an ordinary bike kitted out with a computer and 3D printer. — AFP

TAIPEI: Cycling through the streets of Taiwan's capital, staff from a design company turn discarded plastic cups and bottles into pieces of art on the spot with Mobile Fab — an ordinary bike kitted out with a computer and 3D printer.

"We wanted to do something to bring both recycling and 3D printing closer to average people," said Kamm Kai-yu, a co-founder of the Taipei-based company Fabraft.

Festooned with pumps, wires, tubes and display panels, the Mobile Fab cuts the plastic into strips before grinding it into fine powder. The operators feed the powder into the 3D printer on the front of the bike, using it as the "ink" to create a small medallion they attach to a coloured light.

People who bring plastic items to the roving lab wait a couple of hours for the trash to be turned into art. The medallion is meant to attach to the spokes of a bike wheel but can be worn in any way the person pleases.

It's given free as long as the person provides the plastic.

Almost any design can be printed but the medallion is the team's standard output. One of the few limitations is that the printer can only use polypropylene, or No. 5 plastic, due to the different melting points of various plastics. 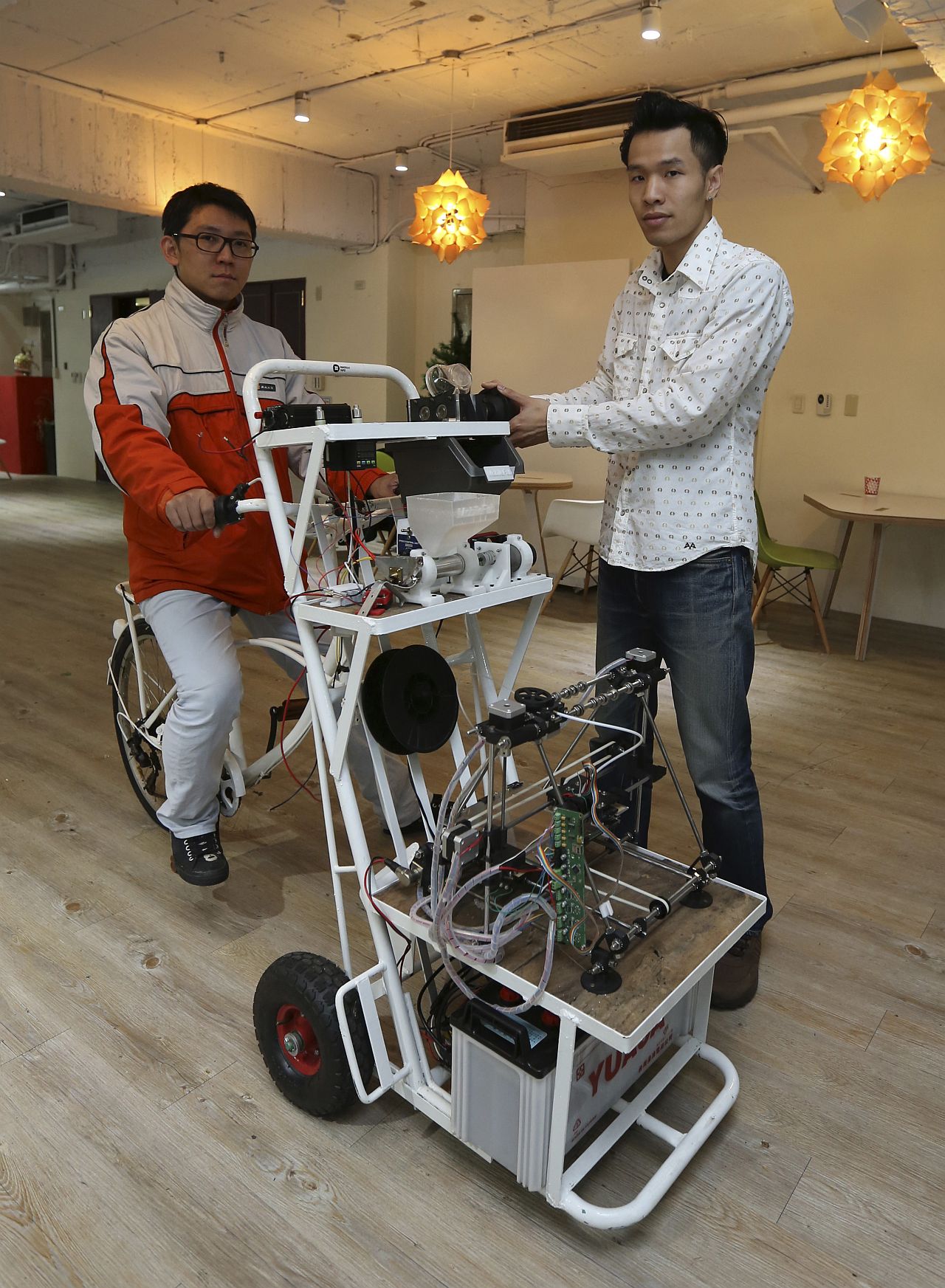 Kamm and three colleagues at Fabraft, all 20-something graduates of design or art schools, are adherents of the "Maker" movement that brings a do-it-yourself spirit back to hardware after so much start-up attention was focused on software.

Motivational slogans including "Keep Calm and Make Things" and "Make What You Love, Love What You Make" adorn the walls of their garage-style workshop.

"We built everything from scratch using designs and instructions freely available online," said co-founder Matteo Chen. The software to manipulate the printer is also open-source and free to download, as are a number of designs.

Taking Mobile Fab to the bustling streets of Taipei, Kamm and his colleagues said they have been bombarded with interest from curious bystanders — so much so that they plan to build a bigger version with more printing power.

Other machines could be swapped with the 3D printer, such as a laser cutter to perform similar on-the-spot design tasks.

But it is Mobile Fab's concept of combining environmental awareness with cutting-edge technology that has raised Fabraft's profile in the ultra-competitive Taiwan tech scene.

The contraption was partly funded by the government in line with efforts to foster homegrown talent as Taipei gets set to become the World Design Capital for 2016, an annual designation by the Montreal-based International Council of Societies of Industrial Design.

Taiwan's obsession with pearl-milk tea, a beverage sold in No.5 plastic cups all over the island, means there is a steady stream of "ink" for the Mobile Fab as it does its rounds. — Reuters