UNDERSTATED AUTHORITY: The man who was handed one of the more daunting tasks in business — filling the shoes of the late Steve Jobs and keeping Apple on top — may himself need a spot of advice. — Reuters

SAN FRANCISCO: Shortly after signing on as chief operating officer at Facebook, Sheryl Sandberg was looking to connect with people in a similar role — No 2 to a brilliant and passionate young founder. She called Tim Cook.

"He basically explained nicely that my job was to do the things that Mark (Zuckerberg) did not want to focus on as much," Sandberg said of the 2007 meeting that lasted several hours with the chief operating officer of Apple Inc.

"That was his job with Steve (Jobs). And he explained that the job would change over time and I should be prepared for that."

While Sandberg has enjoyed a steady run at Facebook, it is Cook's job that has changed radically since then. Now, the man who was handed one of the more daunting tasks in business — filling the shoes of the late Steve Jobs and keeping Apple on top — may himself need a spot of advice.

Two years into Cook's tenure, Apple is expected to unveil a redesigned iPhone next month. It will be a key moment for Cook. The company he inherited has become a very different creature: a mature corporate behemoth rather than a scrappy industry pioneer, with its share price down 5% this year, despite a recent rally. The S&P 500 is up about 15% this year.

A transition was, perhaps, inevitable after an astonishing five-year run in which Apple's headcount tripled, its revenues rose over six-fold, its profits grew 12-fold, and its stock price jumped from US$150 (RM498.15) to a peak of US$705 (RM2,341.31) last fall.

But it's been painful for some.

It is unclear whether the spread-sheeting-loving, consensus-oriented, even-keeled Cook can successfully reshape the cult-like culture that Jobs built. Though Cook has deftly managed the iPhone and iPad product lines, which continue to deliver enormous profits, Apple has yet to launch a major new product under Cook; talk of watches and televisions remains just that.

Some worry that Cook's changes to the culture have doused the fire — and perhaps the fear — that drove employees to try to achieve the impossible.

Cook is known as a workaholic who guards his privacy closely. People who know him well paint a portrait of a thoughtful, data-driven executive who knows how to listen and who can be charming and funny in small group settings.

Lisa Cooper, who went to high school with Cook in Robertsville, Alabama, and remains a friend, still laughs at memories of Cook staging prank photos for the school yearbook and crooning The Way We Were to her in class.

In the day to day at Apple, Cook has established a methodical, no-nonsense style, one that's as different as could be from that of his predecessor.

Jobs' bi-monthly iPhone software meeting, in which he would go through every planned features of the company's flagship product, is gone.

"That's not Tim's style at all," said one person familiar with those meetings. "He delegates."

Still, he has a tough side. In meetings, Cook is so calm as to be nearly unreadable, sitting silently with hands clasped in front of himself. Any change in the constant rocking of his chair is one sign subordinates look for: when he simply listens, they're heartened if there is no change in the pace of his rocking.

"He could skewer you with a sentence," the person said. "He would say something along the lines of 'I don't think that's good enough' and that would be the end of it and you would just want to crawl into a hole and die." Apple declined to comment on Cook or the company for this article.

Cook's fans say that his methodical manner doesn't get in the way of decisive action. They point to the Apple Maps fiasco, in which Apple replaced Google's mapping product with its own on the iPhone and it quickly became clear that Apple's maps were not ready for prime time.

Apple initially downplayed the glitches by saying Maps was a "major initiative" and they were "just getting started." But behind the scenes, Cook bypassed Scott Forstall, the mobile software chief (and Jobs favourite) who was responsible for maps, and tasked Internet services honcho Eddy Cue with figuring out what exactly happened and what should be done.

Cook had a lot of questions, and the episode also prompted him to fast-track his thinking on the future direction of the critical phone and tablet software known as iOS, a person close to Apple recounted.

Cook soon issued a public apology to customers, fired Forstall, and handed responsibility for software design to Jony Ive, a Jobs soulmate who had previously been in charge only of hardware design.

"The vision that Tim had to involve Jony and to essentially connect two very, very important Apple initiatives or areas of focus — that was a big decision on Tim's part and he made it independently and very, very resolutely," said Bob Iger, CEO of Walt Disney Co and an Apple director.

Still, employees report some grumbling, and Apple seems to have taken note, conducting a survey of morale in the critical hardware engineering unit earlier this year.

"As our business continues to grow and face new challenges, it becomes increasingly important to get feedback about your perceptions and experiences working in hardware engineering," Dan Riccio, Apple's senior vice-president of Hardware Engineering, wrote to his team in February in an e-mail seen by Reuters.

Some Silicon Valley recruiters and former Apple employees at rival companies say they are seeing more Apple resumes than ever before, especially from hardware engineers, though the depth and breadth of any brain-drain remains difficult to quantify, especially given the recent expansion in staff numbers.

"I am being inundated by LinkedIn messages and e-mails both by people who I never imagined would leave Apple and by people who have been at Apple for a year, and who joined expecting something different than what they encountered," said one recruiter with ties to Apple.

Still, the Cook regime is also seen as kinder and gentler, and that's been a welcome change for many.

"It is not as crazy as it used to be. It is not as draconian," said Beth Fox, a recruiting consultant and former Apple employee, adding that the people she knows are staying put. "They like Tim. They tend to err on the optimistic side."

There does seem to be, under Cook, a new willingness to admit mistakes and a more open approach to problems such as poor working conditions at Chinese contract manufacturers.

"On the social side, the only way for Apple to make a difference in the world in a broad way is to be — I believe strongly — is to be totally transparent," Cook said earlier this year at what was, paradoxically, a closed-door talk at his business school reunion.

"When you do that, you make a decision to report the bad and the good, and we hope that by doing that, that it puts pressure on everyone else to join."

Under pressure from investors, Cook not only agreed to share more of Apple's US$150bil (RM498.15bil)cash hoard with shareholders, he voluntarily tied his own pay more closely to stock performance.

Yet critics wonder whether Cook's stated commitments to transparency and workers' rights really amount to much.

Cook set up the global manufacturing system being criticised, and the company and its CEO remain highly secretive about matters large and small. Conditions at some Chinese factories have improved — Apple now tracks and reports hours of a million workers to avoid illegal overtime — but allegations of unfair working conditions continue to be made.

Apple has also come under scrutiny over its tax structure, under which it has kept billions of dollars in profits in Irish subsidiaries so as to pay little or no taxes. Cook defended the policy, which is legal, at a Congressional hearing in May.

Shareholders, meanwhile, are focused on the bottom line, and the next big product launch. A sharp drop in China revenue in April-June underscores the challenges Apple faces in its second-largest market as the technology gap with cheaper local rivals narrows and as Samsung Electronics keeps up a steady stream of new models across all price ranges.

Cook got a vote of confidence this month when activist investor Carl Icahn disclosed he had amassed a large position in Apple stock.

Bob Iger, the Apple director, said Cook had taken on "a very, very difficult role given the person that he's succeeded and the company he's running."

"I think he's done so with a deft hand, a strong sense of himself," said Iger, who himself long toiled as the number two to a celebrated CEO, Michael Eisner. "With that comes a real self-honesty that he is who he is, and not what the world expects him to be, or what Steve was. And I like that." — Reuters 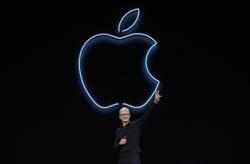 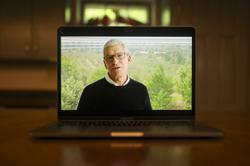